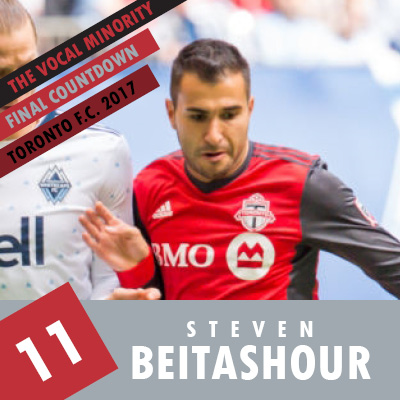 Well, was.  He’s left us for a better place.  Weather-wise, anyways.

Steven Beitashour, formerly of Toronto and now of Los Angeles FC, had a very good season, earning with five assists and a very good tenure during his time here.  He had 17 starts and 4 substitutions during the regular season, started the entire MLS Cup-Winning playoffs, and even played a few matches for the Voyageurs Cup-Winning campaign.

I mean he probably would played more than that except for the injury with Kyle Fisher that LACERATED HIS PANCREAS AND REQUIRED EMERGENCY SURGERY!  HOW DO YOU LACERATE A PANCREAS?!?!

Thankfully, after two months of recovery, the stalwart was back in his starting role, running things, and while Hassler was a capable stand-in, it’s not the same skill set.

The 30 year-old was out of contract and signed for the non-Carson L.A. side. We wish him all the best.

Kristin: 12 – He. Is. A rightback!  Beita was steady and reliable on the right wing – nothing flashy, he didn’t score any goals and he didn’t often put a foot wrong.  But the man had his pancreas lacerated and still played on; he’s a legend for that.

Tony: 9 – “Iran, Iran so far away….” Beitashour could say about his wing play. The versatile former Iranian International put in some solid performances with some great two-way play. The wing backs have a lot to do in Vanney’s system and he proved very reliable. His best years may be near an end but still valuable.

Duncan: 10 – Did a great job for pancreatic awareness issues, and finishing the rest of the game after the tackle that caused the injury is genuinely impressive. Was generally a reliable option at right back all year. Some people seemed to think that Hasler might have made him a bit expendable. Nope.

Aron: 15 – I felt the second half of the season was a bit less impressive than he past performance. Then again he did have his innards exploded, so I guess that might affect his performance. Maybe he can get a black market spleen (*editor’s note – pancreas*) and return to his former glory.

MarkHSV: 11 – The guy nearly died from illness this year and still came back and played great. Got some stiff competition now with Hasler, but he is a solid defender who maybe doesn’t get as much recognition as he’s due.

Mel: 20 – He had a decent season. Nothing spectacular, but his contributions were important. My WTF moment of the year was seeing him get body-checked hard, finish the game, the hear the next day he was in the hospital in stable condition.

ZicoZay: 11 – Should be ranked higher but he is playing in a strong roster and still does a nice job of defending his wing.

TweetKred: 8 – Beita personified strength and effort. To play the rest of that game with split pancreas (He looked so hurt during the celebration when I reviewed the game knowing what had happened) and then come back so quickly and retake his spot that I was certain Hasler had usurped was inspiring.

Steve G.: 9 – Truly underappreciated for what he does for this club and what he adds out wide. A great defensive wing back who can also get up and provide nice service for Toronto’s many potent goal scorers. A very very solid player.

YellingAtSoccer: 8 – If Justin could get a hat trick why couldn’t Beita?

Artur: 18 – Ok, Maybe I’m wrong on this one but he needs a bit more stability with his legs.

Ruchesko: 7 – Surely he’s earned the upgrade to Alphashour by now.

James: 10 – Beitashour is one of those players whose contributions are far too easily overlooked. He displays little of the flash that his counterpart Morrow does on the opposite wing, but one could argue that his delivery from wide areas was as crucial as the goals that Morrow scored. Look back at the big moments, Beitashour’s ability to fling in a dangerous cross and cause trouble was crucial. On the defensive side, there are few as good at defending the back-post as the veteran full-back. Hopefully, he will be back in 2018.

Steve C.: 9 – He works his ass off every single game and is a really solid MLS defender.