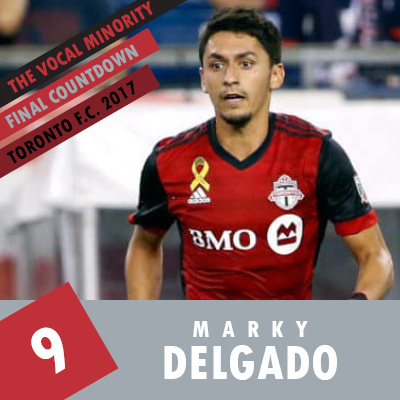 Tony: 10 – Entirely unspectacular – and that’s ok!  Once you stop looking for Delgado to be another Vazquez or Cheyrou, you can appreciate that he does plenty of basic things quietly right.  A less fiery (again, ok) version of Osorio, Delgado comes in to steady that area of the midfield.  Like a handy wrench.

Marky Mark Marco Marcus Delgado. His first name confusion is almost befuddling as how to regard the player himself.

I’m guilty of not quite knowing what to make of Delgado. Perhaps he was unfairly pushed on supporters in the mold of a dynamic playmaker full of finesse and fancy moves. But he really isn’t. And that’s ok.  It just took a while to come to that conclusion.

It was in the final stages of the season when Delgado started on the bench where you kind of saw what was missing without him. A basic central midfielder that is steady, doesn’t lose his head, can break up a counter-attack while spraying some simple short passes. And that too is ok.  Good teams need those guys. It just took a little while to realize Delgado was that guy.

Also: the only Delgado in Toronto sports history to win a major championship. Zingers > Dingers.

Mark: 6 – Does the simple things well.

Duncan: 8 – I don’t think he’s necessarily better than Osorio, or Chapman, or even Cooper, but he fit in ideally with the midfield, doing work that meant Bradley didn’t have to try to do too much, and getting the ball quickly to Vazquez so he had time to do his thing. There was talk that maybe the US should give him a look, which is a bit much I think, but he’s a valuable squad player, and in the right circumstances a valuable regular first teamer.

Kristin: 9 – I like Marky, I like him a lot.  So I was glad to see him rebound from a somewhat difficult season in 2016.  This year however the youngster (I forget how young he is!), showed not just signs of regaining the form he had in 2015, but becoming an integral part of the midfield.  His ability to think quickly and link up with VV et al  showed where his game is heading.  As with Osorio that’s still a crowded midfield, a lot will depend on tactics and individual play in the upcoming season.

TuffyRocks: 7 – He has shown a lot of growth and is a quality player on the wing.

JordyLike: 12 – Quiet, but always solid and dependable with plenty of upside. Still regret selecting him over that angry goat mascot in the Chivas dispersal draft.

Ruchesko: 6 – His and Vanney’s post-Chivas Batman & Robin saga continues, but this season, Marky graduated to Nightwing (Would’ve said Red Hood, but that would involve Marky getting beaten to death by ChivaFighter…)

MarkHSV: 8 – Delgado seemed to be the secret to changing this team from good to great in the early part of the season. It looked like Vanney wasn’t happy with the midfield at first and finally decided to try out Delgado, and then suddenly everything clicked. Nothing too fancy from him, but a solid player who kept the ball moving to the star players.

Jeff: 11 – Tough start and then was one of the top contributors.  Bad wrap in the play-offs -but he works best when the team plays quickly and commits to the attack, we didn’t do it in the play-offs until the final and he proved his worth once again in the final.  Great role player and solid member of the underrated TFC support team.

Steve G.: 6 – The most under-rated player in the league. Go and look it up: over the last 2 seasons in games started by Marky Delgado, TFC is by far the best team in the league. In games where Delgado doesn’t start, they are middle of the pack. The reason why? He does the little things that allows players like Bradley and VV the freedom to roam. He is tireless off the ball to create pressure and win the ball back for TFC & when the Reds have the ball he is the quick, one touch passer that recycles the ball from the backs through the midfield as quickly as possible to ensure that the clubs most creative players get the most touches. He is the Xavi of this team.

Martyn: 13 – Will always be the first boot of 7 that sent us up the field to glory in the Final.

Mr. Tuktoyaktuk: 14 – Had some big games this season but always the nagging feeling he should do better, part 2.

Artur: 14 – Has potential to become an important midfield player.

Aron: 9 – I love him, he’s going to keep getting better every year. He’s also like 14 years old, so he has many more years to play.

ZicoZay: 10 – He accepted the role of being the foil to the bigger names on the roster; he put himself in a position to be the give in the give-and-go.

Mel: 10 – I felt Marky really came into his own this year. There were some not so bright moments, but overall I think he rightly earned that starting spot.

James: 11 – It is easy to forget, given how smooth and rock-solid Delgado plays, that he is still so young. Still maturing, both physically and in his play, he has found a way to add some goals to his game, most scrappy, but that hit in the MLS Cup Final from range was perhaps an indication of what more there is to come from the midfielder.

TweetKred: 10 – Quiet and so necessary. When he was in the mid with Michael and VV7 the fluidity of the team increased massively. We might have to start calling him Markus.  https://youtu.be/EDQV2iXgZjQ

YellingAtSoccer: 10 – Always put in a good effort and like Oso had some off games and some great ones.

Alex: 13 – Was key to making the midfield work this season, if his development continues will eventually be hopefully groomed as Bradley’s eventual replacement.