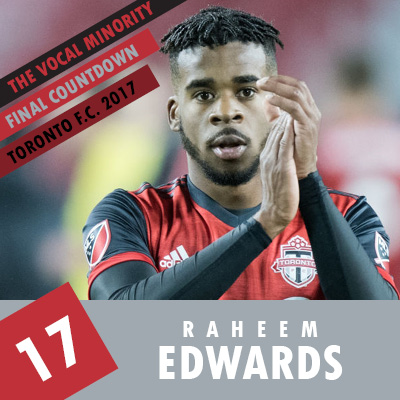 Duncan: 12 – 2016 saw Edwards barely play, but look really good when he did, so I was thrilled when he started getting minutes early in this season, and then, mainly due to injuries forcing Justin Morrow out of the left back position, continue to get minutes for a good chunk of time.

He did not look out of place at all, even when playing nominally as a wing back, looking ok enough defensively, whether on the right or left, and downright menacing going forward as you’d expect given he’s really a forward/winger at heart.

There were important contributions, a point saving goalline clearance when TFC were sputtering along early in the season. Plenty of assists, including this one to warm any Canadian heart, setting up Jordan Hamilton.  He came close to scoring the goal that would have won the Voyageurs Cup, which would have been awesome, but did at least follow it up shortly afterwards by setting up Giovinco for the winner, then hilariously face planting as he tried to jump over the boards  to celebrate with the crowd.

He did eventually get a goal in league play, a delightful cherry on top of a 4-0 hammering of the pizza rats.

He also got a few games for Canada, against Curacao and then against Jamaica and El Salvador after the Gold Cup. He didn’t look out of place though like pretty much everyone any thunder was stolen by Alphonso Davies.

Eventually though, the hearts and pancreases of the regular defenders healed up and thus once again the talented Canadian who’d proved himself more than capable of contributing was relegated to permanent bench warming status, only occasionally used. And yes, much like Vazquez over Chapman, Justin Morrow’s a very good player and it’s for the better of the team a whole and you absolutely can’t argue with how it all turned out, but really, was Hasler on the right and Morrow on the left really better than Morrow on the right and Edwards on the left? Or even Edwards on the right and Morrow on the left? I’m really not convinced of that one. Again, it sucks to see the development of a very promising Canadian player stalled in that way.

But, TFC having too many good players won’t be Raheem’s problem next year as management decided to gamble by exposing him in the expansion draft, presumably thinking his international status would scare LAFC away from his obvious potential and cap friendly salary.  But who isn’t Canadian status a problem for? Other Canadian teams, and god fucking damn if the Impact didn’t step up and make him part of their demands for Laurent Ciman to go to LA. Fuckers.  So yeah, next year he’ll be an Impact player. That’ll be hard to watch, but I guess if he gets plenty of time, plenty of consecutive games and really develops as a player it’ll be good for him and good for Canada

Tony: 21 – Kinda sucks to be writing about Edwards in the past tense but it is what it is.  He wasn’t going to suddenly start in 2018 but it blows to lose a hot prospect.   Especially to The Cheesemakers. Great tools, only time will tell how much of a loss he will turn out to be.

Kristin: 17 – Well it was fun while it lasted – fucking Impact.  Raheem had a solid season, actually more than solid – he looked very capable out on the wing when subbing for Justin Morrow (less so on the right side, but he’s young he can learn), showing a real flair for getting forward and joining the attack, while not completely neglecting the defensive side of things.  I understand why he was exposed, never thought he’d be taken and certainly didn’t expect to see him go to the cheesemakers – sad that we lose another young Canadian player that looks like a legitimate talent.

JordyLike: 18 – Legitimately the only really awful part of this season happened when he was taken a few days after the season wrapped. Probably would have ranked higher if I wasn’t so busy crying profusely. All the best in MTL and I hope Europe comes calling much sooner than later.

Jeff: 9 – Too high?  maybe, but minutes played vs. sheer impact was off the charts.  When given the chance he turned around our fortune in a number of games – Columbus away!!  Made a game saving block vs. Columbus in the first leg.  I’m guessing I will be alone on this one.  …….Impact?? I’m having sleepless nights already!

Aron: 19 – His departure to the dark side is clouding my opinion.

TuffyRocks: 18 – Showed some great things in the start of the season. Hope he moves on from IMFC quickly.

WhaleyStatic: 16 – He will be missed.

Jen: 9 – Rare to be so impressed by someone so young and so Canadian. Sad to see him go.

Artur: 16 – Impact are lucky to have this skilled player in their roster.

James: 15 – With so little turnover in the offseason, aside from the big two acquisitions, it was uncertain where that surprise spark would come from. Edwards was just that, providing that something different that every team needs when the chips are down or the ideas lacking. He won the hearts of TFC fans for his play and personality. He will be greatly missed.

Alex: 17 – Amazing talent that got caught up in the numbers game, will have long career in Montreal .

MarkHSV: 16 – Based on the skill and flair that Edwards showed early in the season, I think he may be better than some of the players ranked higher, but as the season wore on we didn’t get to see as much of him. Really disappointed that TFC lost him, and to Montreal of all places…ugh.

TweetKred: 16 – such a brilliant start, I thought we had a true diamond in the rough. But then somehow started to fall off in his ability to impact a game. But for the garbage display in Ottawa I would have ranked him higher but that was stupid and almost caused us to lose the series to a lower league team with a budget less than what we spent on toilet paper.

Steve G.: 16 – A player who was key to the early success and run of good form for this team. Played many very important minutes early on and appeared poised to make a big jump. But something changed in terms of Edwards trust from coach Vanney and his minutes dwindled as the season wore on. Not sure if this played into how or why he was left unprotected in the expansion draft, but now he is in Montreal and that makes me want to vomit. HE certainly was not an important piece this fall or during the playoffs, but from May until the end of July he was a key cog in this machine.

ZicoZay: 14 – He showed great proficiency at setting the cross and executing on it.

Mr. Tuktoyaktuk: 18 – Seemed like a model youngster well on his way to getting significant minutes and eventually starts. Fell out of the plans somehow and shown the door, which is unfortunate. Curious to know more.