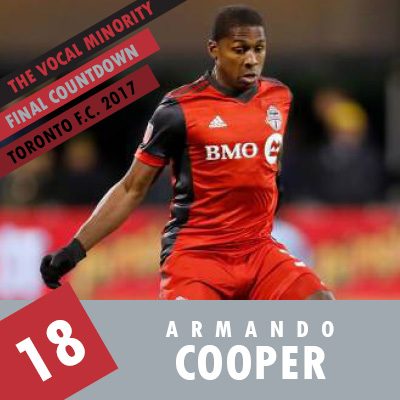 Mark: 19 – The loan that turned into a stay, and we were still confused by it all.  Armando Cooper signed on at the conclusion of last year’s playoffs, and stuck around for the full ride.  In a word : interesting.

Interesting because he started 11 games, but had 13 substitute appearances.  Was he the hardest worker at training? Did he often treat teammates to ice cream? Was he part of an elaborate canal/money laundering scheme?  We may never know, and if we did, we may never understand.

Many of his appearances left me with great confusion.  His regular forays into getting the ball, holding it at midfield and then losing it under little pressure stood more prominent against his forays into getting the ball, holding it and doing something positive afterwards. Getting CONCACAF-y and attempting to draw fouls to draw out the end of the game and looking silly often shadowed his positive contributions.

I will stand by that his performance against Columbus in the semi-final, coming on for Altidore, and being the most perfect deliberate monkey wrench I’ve ever seen.  He should’ve had a goal.  He was made for that moment.

Past that, he was on a fair chunk of cap space, and that’s an expensive price tag for a substitute in this league.

Kristin: 18 – I want to like Armando Cooper more; he’s got some skills, he’s enthusiastic, but he’s so frustrating!  The endless touches, dribbling and so on just make me want to scream.  However, he did very well in the playoffs and hey, he’s going to the World Cup (loved the flag during the Cup celebrations) and no one else on the team is so there’s that.

Duncan: 17 – Cooper was always a frustrating player, but the things that make him frustrating, the ball hogging and dribbling into trouble realllllly didn’t fit in with the Vazquez based quick passing midfield. Thankfully he quickly moved to the bench and generally stayed there, and was actually a useful player to bring on towards the end of the game when trying to kill it off. Enjoyed his Panama flag mls cup celebrating. He’s a useful bench player, but probably earns a bit too much money for that role.

Tony: 13 – So frustrating to watch at times during the regular season . The man would seemingly find a cul-de-sac in an open field . But then the playoffs came along and just when you needed to CONCACAF the crap out of a match, appeared the tricky Panamanian . Is there value in having that around longer? Sure – at the right price.

Aron: 17 – Plays better with stupid hair, did not have stupid hair long enough in 2017.

MarkHSV: 18 – Funny how Cooper was a starter last season when he arrived, and this season fell off the map. There just wasn’t a place for him – until the playoffs when his particular set of skills worked wonders for killing off tight games. I wonder if he will be back or not though.

Mr. Tuktoyaktuk: 20 – His stock declined this season but hey, he’s going to Russia 2018 and we’re not. Harumph. Could feature more in the CCL games.

Jeff: 18 – Got a bit of a bad rap and lost his spot – still showed his class when he had the opportunity despite a few mistakes when he held the ball too long.  Hope we re-sign (although it’s always good to freshen things up).

TweetKred: 20 – but for his play in the playoffs which was necessary to finish off games I would have put him into the bottom 5. Very few players gave me the “oh shit, we’re screwed” feeling like seeing Mr. Concacaf come on the field. If we can get him at a lower pay packet and he gets his game back up after a tough year I’d keep him for clean up duty but would not be sad to see him leave.

Steve G.: 14 – I’m not really happy to put Cooper this high on the list as this was very clearly his worst season at TFC, so much so that he dropped completely out of the rotation for several weeks. However, when push came to shove in the playoffs and in big moments, it was Cooper who was the key sub that Vanney turned to and he did a great job. It was Coopers’ post that lead to Vazquez’s MLS Cup clinching goal.

Mel: 13 – Solid off the bench player. Bring a whole bunch of energy with him.

James: 14 – Cooper is one of the more divisive players on the roster. One either loves him or hates him, and that is liable to change based on any particular performance. Frustrating though he could be at times through a difficult season, he brought a valuable stylistic curveball to a team that needed all hands on deck to achieve what they did. That when the games mattered most, he was one of those that Vanney went to to see out results, speaks to his value. With CONCACAF on the horizon, that is only amplified.

TuffyRocks: 19 – His salary and a INTL spot is probably too much for a professional time waster.

WhaleyStatic: 25 – Too low but your pod has turned me against him. I just get so fucking nervous whenever he comes on. Too be fair he wasn’t bad in the playoffs but still scared the shit out of me.