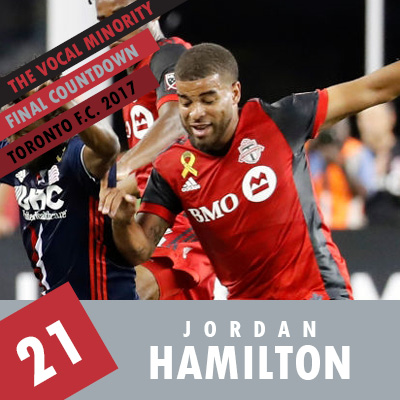 Tony: 20 – A push at best for Scarborough’s own. Joins the other academy grads in having a neutral season at best. We still await that breakout  year and hope it comes sooner than later despite the crowded talent pool up top.

Ok, ok. Maybe NEXT season will be the breakout one. Another season came and went and Scarborough’s own (suck it, Hamilton, Ontario) didn’t manage to break the TFC front line’s quality control tests – again. Even in the midst of depth crisis there were periods where Greg Vanney opted for “Big Ol’” Ben Spencer rather than give Hamilton more minutes. At times this is confounding for supporters keen to see a local break through. At other times – not so much.

Hamilton spent the year in that grey zone where you don’t really want him to spend too much time with TFC II because he’s probably done all he can do at that level – but he’s also not consistent enough to be a first choice striker sub off the bench. This purgatory probably isn’t the best place to be in regards to Hamilton’s professional development but he’s shown enough flashes that he can compete at MLS level. How regularly he can compete is what remains to be seen.

A common thread for players who are in this region of the VMP Countdown is that maybe 2018’s Champions League attendance, along with Canadian Championship duties, will give the opportunity to gain much-needed competitive minutes. If Hamilton is awarded those, and this doesn’t turn out to be something of a turning point season, then questions will get louder. Two goals and an assist in eight matches isn’t terrible but it’s also not likely to stop wolves knocking on the bench.

Duncan: 20 – Hamilton! Hamilton! Hamilton, Hamilton, Hamilton! Etc etc. Obviously didn’t get many chances to play given the talent ahead of him, but didn’t do that badly at all when he was called on. Unfortunately not really a straight Jozy Altidore replacement so ended up behind Ben Spencer in the replacement stakes. Scored a few goals though which is nice, and If I was a CPL GM, I’d be fairly confident in going with him as a regular starter up front.

Kristin: 23 – Jordan’s been the next thing for years, but that’s only because he’s been with the team since he was a teenager.  It’s tough to watch him not play – though played well in his brief appearances this year – and we continue to hope for his breakout moment.  Hamilton’s still very young and has time to develop into a top player.  Hopefully that happens sooner rather than later, but wouldn’t be surprised if he’s leading a CPL team in a couple of years.

Aron: 22 – I remember he did something good this year. Not that good, since I can’t remember what it was.

MarkHSV: 24 – Scored a couple of goals but mainly another year of waiting in the wings for Jordan. I really don’t know when things are going to happen for him. Too much talent ahead of him.

Steve G.: 18 – A player who can do a job. Will he ever start in this league? Not sure. But can he play meaningful minutes and even score some goals for you. A good depth player and a bit of a luxury when it comes to being your 4th best striker.

JordyLike: 21 – Still very high on him, despite the fact he was anywhere from 4th-6th string striker this year. Hoping we can make some use of him before the CPL come calling and offer an actual squad role.

Alex: 24 – With the log jam at forward , his future will depend on injuries and the CPL.

James: 23 – Hamilton was on fire through his early appearances this season, having a perfect shot-to-goal ration until Joe Bendik denied him in Orlando. One of the longest serving members of the club, he has continued to develop, though his time with the first team has not yet come. It will. His play with TFC II showed a lot more than the predatory finishing skill that he has exhibited in his first team cameos over the years. He has been tasked with rounding out his game. Breaking into the striker position on this team will be very difficult, but he is on his way.

Zico: 17 – From what I have seen of Jordan, is that all he needs is more playing time.

TweetKred: 21 – I keep rooting for Jordan but I’m not sure he has the mental game to actually break through. He scored a couple this year when it didn’t matter but beyond that didn’t provide much that I remember. I hope he gets a chance but it seems he isn’t providing something in training/off the field that will get him the time his skills seem to deserve. I expect MORE THAN THIS.

Mr. Tuktoyaktuk: 23 – A few sub appearances. Somewhere there is an alternative universe where JH is a big time starting forward. That universe is not this universe. His future lays beyond TFC I’m afraid, likely in NASL (if it still is a thing) or CPL (as soon as it is a thing).

YellingAtSoccer: 22 – I hope you get some nice playing time when CPL starts up.

Andrew: 19 – Wished he had played more – I think he could have contributed