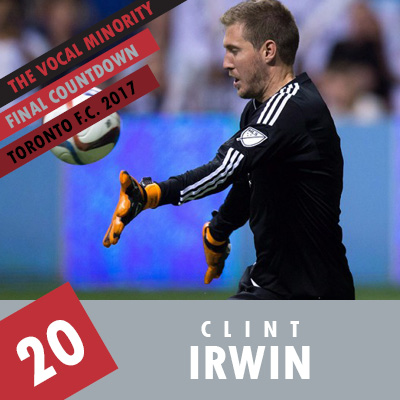 Mark: 16 – The unfortunate situation with our goalkeepers, is that both of them, at the beginning of the season, were largely interchangeable, but I would still favour Irwin as the #1.  He had tons of experience under his belt, and could learn the kid a thing or two about goalkeeping as a professional.

However, when tasked with two relatively interchangeable keepers, I suspect that tie goes to the younger of the two.  Yes, I accept that there’s more to it than that, and he’s far from past his prime at 28, but you want to develop for the future, it makes a certain degree of sense.  And I’m #proIrwin.

Irwin started three of the first four matches, then he’d make up the rest of his sporadic appearances throughout the rest of the season, including all four Canadian Championship matches.

No word if Irwin will be satisfied being the backup, but if he is, I’m very comforted knowing he’s there.

Kristin: 20 – It feels weird to rate Clint so low on the list, and it’s got everything to do with minutes played not contribution.  I like Irwin, I root for him and I was happy to see him start the season as the #1 keeper for TFC, but injuries and a rapidly developing Alex Bono changed that.  I’d love to see him stay with the team, but won’t be surprised if he moves on.

Duncan: 19 – Poor Clint Irwin. A thoroughly competent goalie, but an injury early in the season let Bono steal the job and you can’t really argue with him keeping it. Irwin’s save % was better than Bono’s and I’d be very comfortable with having him as a backup again. Wouldn’t surprise me if he ends up going to some other team as a starter though.

Tony: 19 – Irwin joins the long list of TFC # 1’s who lost their place through no real fault of their own. A couple of shaky appearances upon a return from absence lead to Bono’s ascendancy but Irwin could still be the man for a lot of MLS sides. Having him as a backup seems an unlikely luxury long term.

Aron: 23 – Cl-int Ir-win, seriously TFC did we need that phonetic spelling? DID WE? Crap season for him.

Jen: 21 – He’s better than this ranking, but you wouldn’t know it because he never plays.

MarkHSV: 19 – Rank 19 is pretty harsh I guess, but we didn’t see much of Irwin after Bono took over. A like him a lot and think is unfortunate that he lost his starting spot. I can’t imagine he will be content to sit on the sidelines again next year.

TuffyRocks: 24 – Thanks for warming the bench. Did have 2 SO in 6 games so there’s that.

Steve G.: 21 – After losing his starting job to Alex Bono, plenty of keepers of Irwin’s ilk would have sulked, complained, or even asked to be moved. Instead, he was more than just a consummate professional- he was a key dressing room guy and an amazing mentor to Bono. Speaks to his character.

JordyLike: 20 – Lost the starting role and didn’t do much in the limited time after to show he deserved it back. Still solid and I’d love to keep him at backup, but I can’t imagine him not being sent to a team in need of a starting keeper. Was my (very unlikely) hope we could use him in a package to bring back Raheem.

Ruchesko: 22 – Some crude statistical analysis informs me TFC paid Irwin approx. $15,385 per save in 2017. Too late to reclaim Konopka?

YellingAtSoccer: 18 – I’m sure he would have been up near the top if he played.

Mr. Tuktoyaktuk: 10 – Only six appearances. Fair bet that he’s been playing a role in Bono’s development behind the scenes.

James: 19 – Another year where injuries opened the door to Bono, Irwin has faced that disappointment with a professionalism that should not be overlooked. While the starters rightly get the headlines, there is a lot of hard graft in the background that is vital to success on match day. Irwin is the embodiment of that ethos and it never hurts to have a starting calibre keeper in reserve should a dip in form or injury strike.