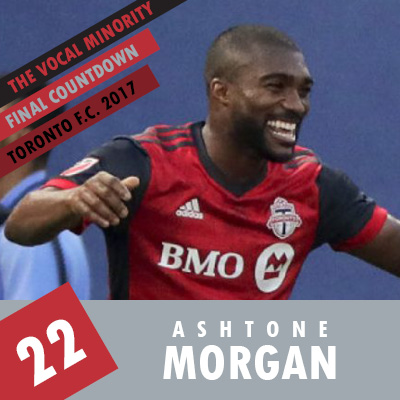 Duncan: 23 – Ah Ashtone Morgan. I want him to play and do well and be good, I really do, and you’d think wingback in a 5-3-2 would be ideal for his strength (singular, it’s not defence particularly, and it wouldn’t be as a midfielder, but as the guy on the overlap throwing in a dangerous cross, he’s not bad at all) but really, it’s just not happening is it? Not only does he have to wait behind Justin Morrow, but now there’s Raheem Edwards (well, not any more, but are TFC going to sit back and be ok with Morgan as the backup left back? that’d be a gamble.) and well, let’s just say I’m surprised he’s still going to be here next season, that whole ‘letting him bang the drum at the parade’ thing seemed like an obvious ‘thanks for everything, best of luck’ gesture.

What did he actually do this year? Well, he only got into 5 league games, but he did score a goal, so he’ll finally always be able to say he scored in an MLS game, that’s something. The build up was scrappy, but it’s a very nice bit of technique to keep the first time volley under control and not send a dinger flying into the stands of legendary historic Yankee Stadium.

I also vaguely remember there being one home game sometime in the summer where he did the repeated overlap and dangerous cross thing which brought back 2012 ‘Morgan to Koevermans – goal!’ memories.

I presumed he would have actually got minutes in the Voyageurs Cup, but sadly, no. Only 21 minutes in Ottawa there.

Anyway, not a great year all in all, but let’s face it – He’s nailed on to be a relatively high profile CPL expansion draft pick whenever that gets going.

Tony: 25 – He’s still here!!!! We all love Ashtone but the writing has been on the wall for ages now that his time at this level is numbered. Possibly a long career ahead in the hopeful horizons of the CPL where he can be a star attraction.  At least he lifted the cup – no less than he deserves for putting in his time during THOSE years.

Kristin: 21 – One of my favourite players, I want nothing but good things for our #NastyLeftBack, but it’s tough when Justin Morrow is the player you’re behind in the lineup.  He’s been with the team longer than anyone (he’s one of the original Academy players signing in 2008); outlasting coaches, players, management; enduring the worst years and finally getting some success.  I’m thrilled that he scored that goal this year – a brilliant moment for a talented player that just can’t seem to make that next step. While I’d love him to break through with TFC, I expect that he’ll be captaining a team in the CPL in 2019 – but one more year here in Toronto with lots to play for will hopefully mean we get to see a lot more from Toronto’s longest serving player.

Jen: 1 – We need to take a minute and appreciate Ashtone Morgan. He has been there with us through good times and bad; he was born a red and he will most certainly die a red. When 2017 is just the “old glory days,” when Vanney’s moved on, Bez has moved on, Manning has moved on, and most of us are probably dead, 37-year-old Ashtone Morgan is going to be back in our starting 11. Respect.

JordyLike: 22 – Well, I guess the #2 LB spot begrudgingly belongs to him now, again. Still genuinely like him as a player, but will never live up to what was expected of him. Probably would’ve got more play time and wouldn’t have needed Hasler if he was right footed.

MarkHSV: 23 – I like Morgan but he never gets a chance to play. It’s tough being the backup for Justin Morrow though.

WhaleyStatic: 19 – He scored this year.

TweetKred: 22 – ASH SCORES!!!!!. Love Mr. Morgan but with Morrow and then Edwards ahead of him he wasn’t seeing the pitch.

Artur: 19 – Good bench player and pleasant surprise with his running.

TuffyRocks: 21 – I wish I could have rank’d him higher. I thought he looked good the few times I seen him play this year.

YellingAtSoccer: 23 – Another one for the CPL bin.

James: 21 – Morgan is, correctly, much loved in Toronto. A troublesome foot injury robbed him of most of his season, but he did manage to score a first MLS goal and pass the 100 league appearance mark for his hometown side, a rare member of the century club. Behind Morrow at left-back, his playing time will be sparse, but valuable contributions from players at this point on the roster are in part why TFC won everything in 2017.