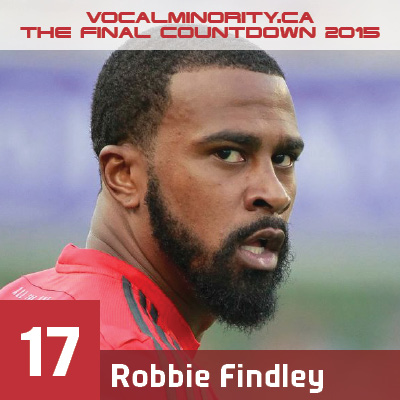 Kristin: 14. *Just no. The invisible man, the player we had to have, one of the most polarizing players we’ve ever had. For the fuss and the price tag? Very expensive invisible man.*

How did I ever rank him this high?  That mushy middle really got away from me didn’t it?  Possibly the most polorizing player on Toronto FC last season – well non-DP anyway – and in at least a couple aspects it’s not entirely his fault.  I admit to being meh about his signing but not overly angry about it; that is until the season started.  Other than the first game and maybe one or two others later in the season where he was OK to solid; Findley was mostly someone that I hoped wouldn’t be named to the Starting XI.  In fact I cringed (and likely swore, a lot – OK you can scratch the likely) every time I saw his name in the line-up.

Findley is hampered by several things: 1. The fact that TFC (surprisingly) used their pick in the first round of the re-entry draft to take on the MLS vet (and MLS Cup winner with RSL) and were very adamant about it; as though they’d scored a coup.  2.  His salary – he was alread on more than $200K when Bez & Co. picked him, not exactly what you expect of a cap wonk.  Did I mention that if you take someone in the first round you don’t get to renegotiate their contract?  3.  His production this season – Marky Delgado scored more goals than Robbie Findley did this year.  4.  Being played out of position (that should be TFC’s unofficial motto – come to Toronto and learn a new position!)

Three of those four aren’t his fault – if someone’s going to pay you a ton of money after you’ve been just mediocre for the past couple years, why wouldn’t you jump at that opportunity?   And having a coach that thinks you’re a midfielder instead of a forward can’t be easy.  However, watching him muff chances, mis-read passes and pretty much refuse to play defense – hell, Seba plays defense – game in, game out is maddening.  When you’re wide open in acres of space and no one will pass to you, that should tell you something.  When in the same situation opposition defenses pay no attention to you?  Huge warning bells.  And yet there he was every bloody week – in Vanney’s starting XI – even though it was clear that this was not working.  He must be amazing in practise every week or; and this is my personal pet theory, he’s inherited Reggie Lambe’s blackmail materials.  Otherwise I cannot fathom how or why he got as much playing time as he did – well, I could but rating Vanney’s coaching skills is another conversation.  Either way, if Findley is back next year he needs to make less and play less; if not this team will just continue to fail with style.

Duncan 16. Though a bit puzzled at why he needed to be taken in the first round and thus guaranteed expensive, I wanted to like Findley, and really thought I would. I thought he’d be another Chad Barrett, a bit erratic with his finishing but fast, energetic, and hard working, the kind of guy you can’t help but root for. Sadly we didn’t get that at all, and he was a frustrating player to watch and quickly became a bit of a whipping boy. Perhaps that’s unfair and I should think of him as blamelessly as I do Warren Creavalle. After all, he pretty much came out and told us he was a forward, and playing wide wasn’t really his game, and that’s exactly where Greg Vanney put him all season long.  He was generally ineffective going forward, and curiously reluctant to do it, he often seemed to turn back when he got close to goal with the ball, which isn’t ideal for a forward, and by the end of the season seemed to have lost his confidence as demonstrated in the last couple of games. Montreal were leaving him along and early in the first of those games, TFC got him the ball in dangerous positions and he opted to cross rather than shoot and thus chances went missing. Eventually his own team just started ignoring him as well, a suitable ending to his season. He didn’t really help much in defence, and fair enough that’s definitely not his game, but if you’re not offering anything going forward, then why the hell did he keep getting picked?

Tony: 14. Much-maligned and mostly with reason. The man that TBez HAD to have was the opposite of “bang-for-the-buck”.

Mark HSV 19. It’s pretty telling when Bradley would prefer to try to dribble past 3 defenders in a play-off game instead of pass to a wide open Findley. He may have speed and a bit of talent on the ball, but nothing else. His stats are ok I guess, but I think TFC could have done better with Warner or Delgado in his position. It could have complemented what Osorio was doing at left midfield. Instead there was Findley, who nobody had confidence in except for Vanney. Also, if Vanney wanted speed and footwork, Jackson would have been much better at right mid, because he sometimes made good things happen. Findley did not.

Yelling at soccer 19. BAHAHAHAHAHHAHAHA! He did score a pair and got some assists, so that’s something I guess

TC St Clair 21. Strictly personal opinion. A very good moving pylon. Distracted defenders from the real threats. Would rather he not return.

Jordylike 27. #55 in your programs, #27 on my list. Entirely spiteful place because I am a spiteful man.

Zicogold 19. He did show well on SOG and assists

Jason Anderson 10. He is fast. I’m stalling on picking any non-Morrow defenders.

Ben Bromley 10. I desparately wish for United to have someone this fast. But not, you know, him.

Alex Lach 18. Would have been great in a TFC uniform 5 years ago, lost his speed and the one thing that made him a deadly striker in MLS, was used a wide defender which when paired with Jackson, seemed to create a black hole in the TFC defense that just sucked up opposing team goals, for the price TFC played, younger players should have got a chance.

Mike Newell 16. Too much money, for too little end product. Word is he’s a great locker room guy, but if you have to pay over $200k for that you are in trouble. He can come back next season, but on a greatly reduced salary and not as a regular starter.

Enrico S 14. Makes too much money for his contribution.