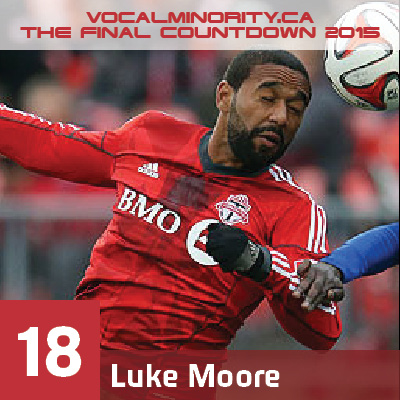 Mark: 14.  After last season being leaned on heavily to produce, he played mostly from the bench this season, seeing his appearances nearly halved.  Low on the pecking order behind Robbie Findley (somehow, I know) with a better goals per minute ratio (1 every 625) than Robbie Findley, he found his way into 15 matches.  Wasn’t terrible in his contributions, but wasn’t memorable either.

Duncan 21. Luke Meh. That’s a little unfair, as I think he worked quite well with Giovinco when the two of them were partnered up top in Altidore’s absences but it was generally an unmemorable season. A decent depth option, if we were to pay him at that level, I’d be alright with him sticking around for next year. What the hell, I’ll put his goal in here, nice flick after a smart run, good ‘fox in the box’-ing.

Tony: 20. Less would be Moore. Surely we have come to the end of the Luke Moore Era in Toronto. “Arthur 2: On the Rocks” is generous.

Kristin: 18. Not exactly a View To A Thrill but often mystified over his getting less time than Findley.

Mark HSV 24. Moore gets dropped low in my ranking because I generally think he is lazy, not very creative and he scowls too much. Last year he got some fluky goals, but that doesn’t mean he’s a good striker. Maybe my image of him drops because of a preseason match where he was captain, and he missed a PK trying to do a stupid stutter-step. He should have been dropped from the squad at that moment.

Yelling at soccer 21. Rated so low because he obviously tried to bang Vanney’s wife, which can only be the reason he’s behind Findley on the bench

TC St Clair 16. Meh. But I’ll give him this: 1 goal and 3 assists in limited action. Could have been worse.

Jordylike 19. During one game, an hour in, I turned to my friend and asked if Moore had won a single header yet. He didn’t realize he was playing.

Jason Anderson 20. I think he’s actually better than this, but since he barely ever plays it’s hard to place him higher.

Ben Bromley 15. He doesn’t get enough minutes, but he is better at his job than most TFC defenders are at there’s

Richard Wyatt 20. How was he not better than Robbie Findley?

Alex Lach 17. Injuries, personal hardships and other issues saw Moore, have a down season for TFC, does provide useful coverage as strong CF but again missed too much time.

Mike Newell 17. A goal and 3 assists, meh thanks for the memories.

Enrico S 23. There really needs to be a way to have ties for last.