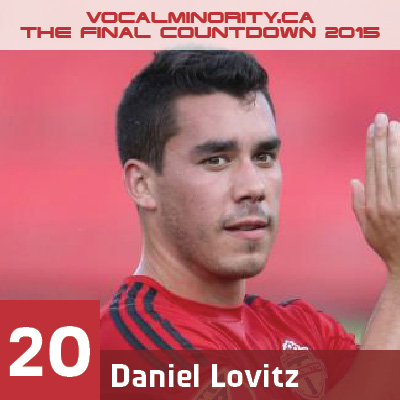 Kristin: 25. *Who? No amount of individual ‘look at me!’ warming up from the subs bench (when he was a sub) could get him minutes this year.*

Dan Lovitz; man of mystery.  Seriously, he made little impression (although barely playing will do that) this past year.  After a decent 2014 season that saw most of us pleasantly surprised by his abilities on the wing; he had a decent amount of pace but more importantly showed intelligence and a nice cross.  And then of course there was his rather endearing habit of getting up off the subs bench and warming up AGES earlier than he had to; it was quite charming and well, how can you not like that sort of enthusiasm!

During the off season there was the drama during the expansion draft as Lovitz had (unsurprisingly) been made available and then snapped up by NYCFC, but then mere hours later he was back as a TFC player as Bez & Co. had sent allocation to City-lite to get him back.  All of that would seem as though the team really wanted him and that we’d see him get worked into the first team more often throughout the season.  Instead other than an appearance in the season opener he was invisible – not even an unused sub – until July, and then vanished again by the end of August.  Almost half as many minutes played, and only appeared in 11 games overall – hardly seems to be the resume of a player that they had to get back from the evil Yankees.

Toronto didn’t play with a lot of width this year so that’s the answer I guess, but during those games (weeks, months) when the forwards were still looking for service, or when injuries had taken their toll and etc, it was a bit surprising to not see him out there, or even available for selection,  more often.  I’d be fine with him being back, and at least regrettful if he were to be released.  He seems like a solid player and with more minutes likely has an upside going forward; sure why not bring him back Bez.

Duncan: 25. I don’t care. Dan Lovitz. I don’t care. Dan Lovitz, Dan Lovitz! That chant is wrong, I do care, I have a vague good feeling towards Lovitz, but it’s mainly a hangover from 2014, I don’t really remember him doing anything this season. For a team with such a blatant lack of wingers, the fact he was barely ever used is a bit troubling. Coming soon to an NASL team near you!

Tony: 23. Tbez DESPERATELY needed to snatch him back from NYCFC’s expansion draft claws only for Lovitz to be frosted all year. Weird.

Mark: 24. Should be higher for all the efforts to retain his services.

Mark HSV 22. I’m not sure why Lovitz dropped so low on the depth chart this season. He seems to be a solid player, and he needs more playing time to develop.

Yelling at soccer 11. Was fun to watch, even if not that effective.

TC St Clair 22. The fact that I think I could have had a better season than Lovitz says something.

Jason Anderson 21. If he’s going to be used as a left back more in the future, this will be a generous ranking.

Alex Lach 25. Another wide player who saw some of the pitch but not enough for an impact, he has a signature move, maybe in the off season he can scour youtube for a second one.

Mike Newell 22. Not sure where he fits on the team in its current form. Plays on the left and obs won’t replace Giovinco, left back might be in his future but Morrow is a lock there and Ashtone is more capable. His performances were limited to a spot start here and there and a not so great fill in at left back. Will still be asked to be a solid bench guy, no more, no less.

Enrico S If I thought he was a better player, I’d have a good pun about Lovitz