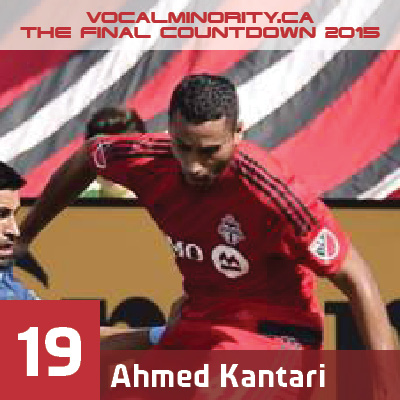 Tony: 16. Remember when Tim Bezbatchenko bemoaned that TFCees of the past had a terrible habit of going out and buying old, expensive, somewhat broken British players when they needed to fill a need and that needed to change? Well, it’s obviously still ok as long as it’s not from a British league. Case in point: Ahmed Kantari.

The Moroccan is the latest in a seeming series of hundreds of centrebacks brought in from exotic lands to fix the leaky defence with a blend of veteran experience at the “highest levels” of European club football. Like many of his predecessors – notsomuch. Yes it takes a while for a defender to “get used” to MLS but Kantari really didn’t seem to ever find his stride. Not quite the stoic stay-at-home defender and definitely not a ball-playing defender, much more was expected from the former Brest man (LOLZ).

With a hefty pay packet of Euros and much noise about TFC’s need to fix the defence, Kantari may not be long for these shores. England out. France out. Maybe Switzerland?

Duncan: 20. Ranks right up there among the worst ever signings in TFC history. Obviously Perquis hadn’t worked out so they needed someone to be THE guy in defence. I’m baffled as to just how they thought Kantari might be the guy they need. Didn’t fit the bill in any way at all, there are 0 reasons to bring him back for next year.

Mark: 19. Needs to be better than what he is, if only to maintain belief that Ligue 1 defenders are better than MLS ones.

Mark HSV 17. This guy is kinda meh for me. Maybe he is better than what we saw, but it strikes me as a dumb move by Bez to get a defender from a team that was fighting relegation – even if he’s from a decent league and has experience. He really didn’t show it. I think they need to find a new CB, maybe keep Perquis, and lose Kantari.

TC St Clair 26. The defensive band-aid that made the cut deeper.

Jordylike 21. “Might as well have played Hagglund” is how I feel about him.

Jason Anderson 18. He is a guy you signed. That’s about as much as I can say for him.

Ben Bromley 21. He’s okay, but no one needs another over thirty Josh Williams

Alex Lach 19. The other half of the Frence Foreign Legion that made up the CB crop for TFC, tough slow and reckless, seemed to struggle with communication and connectivity with fellow defenders for a high price tag. Was as useful as the Maginot Line against the Blitzgrig

Mike Newell 21. AKA the new whipping boy. A poor signing most people saw coming when it was announced. That said it’s always difficult to come to a new league and team mid way though a season. However his cap hit, and the performances he put in were awful to say the least. Wouldn’t be shocked to see a buy out used in the offseason.

Aaron Bennett: 18. Kantari started out ok. He lived up to his reputation of being a vocal player. In the end the guy turned out to be an overpaid plug. Let’s try not to make this mistake again….