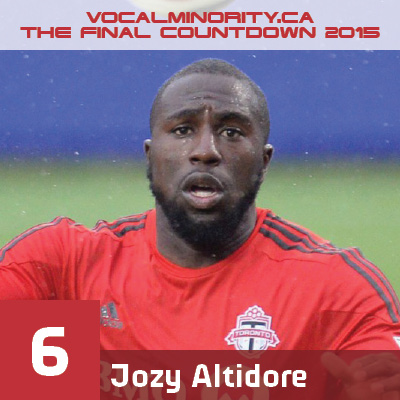 Tony:  6. He’s the bigger, bloodier deal. Apparently. Arriving in a “value-for-value” swap which saw Jermain Defoe head to Sunderland, Altidore’s goal was to return to MLS and return to the player which saw him leave these shores in the first place. Hmmm… not quite. Not terrible… but not quite.

And that’s the rub really. At his price, at his salary and with his place in the North American soccer spectrum, a bit more was expected. His goal tally wasn’t horrendous. It was perfectly average. Unfortunately perfectly average can be found at a much lower price in this league.

It wasn’t really the number of goals that makes one feel that Altidore could have been more to TFC this year; it was what happens when he isn’t scoring. Altidore was rarely the force off the ball that you would hope for a man of his (seemingly increasing) size nor was he a thorn in the opposition’s side often enough. His reputation in the US caused some teams to respect him but if he repeats this year in 2016, his reputation may be solidified as a chronic underachiever with a penchant for stupid red cards.

Duncan: 5 I still think he’s only here because TFC didn’t want to have to sell Defoe and have just how much of a bath they took on him be publicly exposed, so instead they went for a swap deal and can then pretend that Altidore’s worth whatever they think makes them look better in that whole sordid mess.

Through the season, he was more or less okish, definitely better than I feared he might be after his Sunderland exploits. Got two very nice goals against Vancouver, then another couple when we really needed a win in Orlando and a last minute penalty to get a tie in Columbus, so definitely had his big moments. Also got himself sent off against New England when the season was starting to go off the rails in the summer, and then right at the end when things were getting important managed to get himself sent off from the bench! Not exactly the leadership you’d want for someone on so much money.  He was often in and out of games as well, rarely contributed much defensively and not really involved as much as you’d want and hope for, and the amount of shots he takes is ridiculously low for a centre forward. Compare him to Kei Kamara or Didier Drogba, centre forwards who really had an impact and he jusrt seems a bit invisible really.  Should he be a DP? sure, why not, but one who makes a low enough amount you can buy down with TAM and then go and get another DP who’ll make more of a difference.  I’d rather have kept Gilberto. Would love for them to trade him away this winter but that won’t happen, whether Vanney can get much out of him tactically and motivationally will go a long way to whether TFC can take the next step, or if not, maybe that gets Vanney fired.

Mark: 13.  It’s difficult to crap on anyone who bags 10 with this side, but will continue to do so until he delivers

Kristin: 5. Higher than I expected to rank him. Only here because of goals. Has a lot of growing up to do, waiting to see if that happens.

Mark HSV: 6. People are hard on Jozy, but 13 goals? More than Defoe, and he’s already 6th in all-time scoring for TFC. He just needs to not disappear so much, and keep a cooler head. He is so big and strong, that I think he needs to use that to his advantage and muscle guys off of him more. And take more shots instead of looking to flick the ball to other guys. The first game of the season was so bright for him, I hope he can find that again.

TC St Clair 5. 18 shots on target. 13 goals. Even if many were PK’s and/or being at the right place at the right time. Loves this city like it’s his own.

Jordylike 7. Calling him a poacher is a nice way of saying he has no discernable skill but is still often in position to score.

Jason Anderson 5. His double-digit goals is good for TFC & the USMNT (but maybe not a good sign for MLS?)

Ben Bromley 4. 13 goals in 21 starts is a good clip, but it never really felt that way.

Richard Wyatt 9. Remember when he was upset his free Chipotle card didn’t work in Canada? 4.75 million a year and he wanted free burritos

Alex Lach 11. At times seemed not interested in the game, scored goals but was not always that big bruising CF you expected. Him and GIO at times lacked that connection to really make a great striking partnership

Mike Newell 2. I’ll probably have a lot of people disagree with me here, but I think only in Toronto would supporters complain about a DP who scored 13 goals in 25 appearances. Yes he had a tendancy to drift outside the box, but he scored goals and some big ones. Also not his fault on the amount of call ups, blame poor MLS scheduling and Klinsmann.