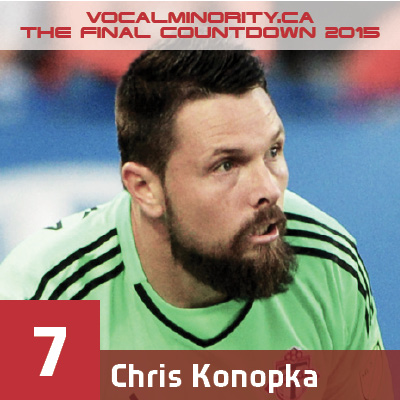 Duncan: 10. Ah, TFC. Can’t avoid a goalie controversy to save their lives. Bendik’s injury opened the door to Chris Konopka and what do you know, he came in and did alright, putting together a few good games, meaning when fit again Bendik didn’t get the job back and all of a sudden found himself on the other side of the ‘why pay this guy so much money when this guy making much less is just as good really?’ reasoning that cost Stefan Frei his job. Konopka did deserve to have that run of games, though his form started to dip after a few games, having a very dodgy game that somehow ended in a shutout against DC, followed by letting in 4 in both LA and New York and that was enough for Bendik to get the job back just in time for the cushy Philadelphia at home game. Then Bendik was crap and so it was back to Konopka. The musical gloves was a very unnecessary game really; Neither of them were ever really the problem, neither of them were ever really the solution, though at least Konopka was one of the few players to out of a fight against Montreal, making a few saves to keep it close for longer than the rest of the team deserved. Then they both got released, which is a bit harsh on Konopka, he’s a decent value for money backup, but I guess that’s gonna be Alex Bono’s position next year. Hopefully he can catch on with some other club, or at least hang around in the MLS keeper pool long enough for all these expansion teams and catch on there.

Anyway, there were more random highlights than usual with Konopka, whether it’s the admission he listens to reggae to settle his Chi, or his fresh take on the Pander Beer by taking a drink from fans after a win, or as mentioned below which jogged my memory, that time he came out to get the ball and absolutely flattened Damien Perquis (getting away with a handball outside the box in the process).

Can TFC do better, sure, but it’s always sad to say goodbye to a cult figure. Cheers to you Konopka.

Tony: 7. He didn’t start the fire. (He may have discovered it) TFC’s Kaveman Keeper made the most of Bendik’s injury but is he a true # 1?

Mark: 8. Taking out Perquis in that one challenge is a season highlight.

Mark HSV: 11. Konopka gets 11th place for basically being the starting keeper, but let’s face it, he’s not great. I liked his antics like drinking beer with the fans, but other than that I don’t have much confidence in him as a starter.

Yelling at soccer 8. 4 Shutouts considering the back line? Not bad. Plus that beard game, and the beer drinking

TC St Clair 12. Considering he’s not a legit #1 and took over the role, he fared well enough to keep TFC in games. Still not a starter, but has cool facial hair.

Jordylike 9. Better than expected. Expected nothing. Really not more than a backup, but pretended to be a starter admirably.

Zicogold 9. As long as he did not take more than 3 steps off his line he was a good GK; got into trouble after those 3 steps

Jason Anderson 12. For TFC he’s a good GK, which means he’s really just a quality back-up for a lot of teams. Has a great beard though.

Richard Wyatt 5. That beard gives him the look of a young Stonewall Jackson

Alex Lach 5. A revelation this year, showed that he could backstop TFC to wins, was smart with the ball and most importantly provided TFC with a choice in net.

Mike Newell 12. A bang average GK, no more no less. He looked more solid in goal than Bendik this season when he got the chance, but it was only by a shade. There is no way he should go into 2016 as the no.1. This is an area that needs improvement.

Matt Goshert 1. Ok, literally how does a pool goalkeeper turn a starting opportunity in to the BEST RECORD AT KEEPER IN YOUR CLUB’S HISTORY? Oh… yeah – TFC. I forgot. Also I have his Crew jersey.