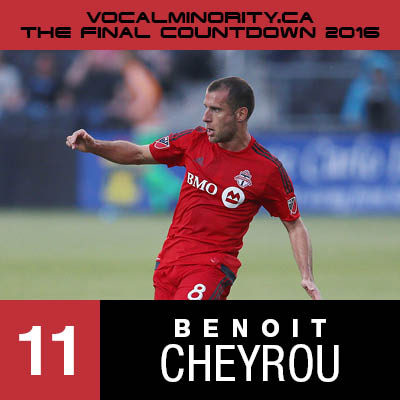 Kristin: 6 – Our favourite menacing dock worker – and the most intelligent player on the pitch – the sublime (yes sublime) Cheyrou, our midfield maestro, keeper of the ship during injuries and scorer of the most amazing goal ever. Hopefully we get one more year of his marvelousness.

Benoit Cheyrou remains one of my favourite players and one of the best bits of business that  TFC has done in the past two years.  Silky skills, delicious passes and a calming presence in the midfield; rarely has a bad game and instantly imbues confidence when he steps on the pitch.   I was delighted when he returned for the 2016 season as watching him last year was not only fun, but enjoyable to watch a player with his quality on the field.  It’s great as fans to have a player with his smarts and ability as part of the team – he improves those around him and I hope to see him move into coaching when his time with Toronto is over.

This season was a bit different for Cheyrou as his playing time was diminished quite substantially due to injury and a change in how Greg Vanney set up his team (that diamond midfield didn’t exactly have Benoit’s name written on it).  Cheyrou was injured early on in the season, suffering a quad contusion only a few games into the season.  The injury would see him miss almost two months (most of April and May) and he didn’t make his return to the lineup until the Voyageurs Cup at the beginning of June.   He was a welcome veteran presence during TFC’s Cup run as the club was dealing with absences from Copa America and helped to marshal the team to another Canadian championship.  Post Copa and throughout the middle of the summer Cheyrou continued to be the go to in the midfield due to the loss of Michael Bradley and Will Johnson to injuries, and was a big reason that the team stayed on an even keel throughout that period.

After the return of Michael Bradley, Cheyrou’s playing time went back down to zero fairly quickly and he would only see one more start and a few sub appearances for the rest of the regular season.  And then came that game; you know what I’m talking about, the amazing Eastern Conference Final second leg – one of those games that you remember for the rest of your life.  A drama filled, emotional, exciting and ultimately thrilling affair that saw Toronto FC come away the victors and in large part because of Cheyrou’s only goal on the season; that glorious diving header that helped propel the game into extra time.

As the short off-season continues, all signs point to Cheyrou returning for another year with Toronto – nothing is official as of yet but according to all who cover the team, the deal will be done – which is a good news given the loss of some midfield depth, plus the younger players get the benefit of his knowledge for another year.

Mark: 11 – One of my best friends ever, we met at an airport baggage carousel once…

Duncan: 10 – Much like Will Johnson, victim of too many central midfielders. A great option to have on the bench though and for that couple of months or so in the middle of the season when he played regularly, was a big part in making sure it didn’t go completely off the rails. Happy to watch him hoist the Voyageurs Cup, and then for him to come on as a sub and score THAT goal was absolutely fucking magical.

Tony: 11 – 11, like two high tar French cigarettes next to each other

Duane: Playoffs bump him up.

Mark HSV: Didn’t factor too much into this season, but played some important games during injury spells. And of course had a huge goal in the playoffs. But he’s slowed down a lot and can’t be depended on for long stretches. Might be time to let him go, sadly.

Mel: Reliable whether starting or off the bench.

Jen: So like every time he came on, the world became a brighter and safer place, and i would also like to mention he has fantastic legs, but that honestly has nothing to do with my ranking decisions.

David: Contributed well when he played.  Surplus player now and most likely a victim of the salary cap for 2017.

Richard: Best midfielder on the books .

Steve: For me, Benoit gives us way way more then Johnson – except Benny is old – so yeah…old guy..