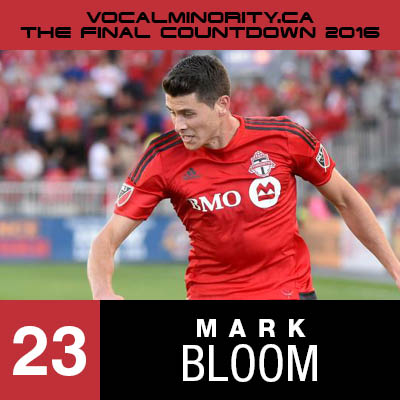 Kristin: 23 – Poor, I mean middle class Mark Bloom.  Such a nice boy, but hard to remember anything else about him.  Happy to see him going home to Atlanta.

Oh Mark Bloom, your time at Toronto FC just never really clicked did it?   In just over three seasons (after being scooped up from the Atlanta Silverbacks in 2013), Bloom only played in 39 games – the majority of those in 2014 when Ryan Nelsen really leaned on the young defender.  He was rewarded for his efforts with a multi-year contract – everything was coming up roses (Get it? Roses? Bloom? Bueller?), for him and we all looked forward to seeing if he could up his game and become the RB that TFC never seems to have.

Sadly 2015 was a complete washout due to injuries and 2016 wasn’t much better. With the signing of Steven Beitashour there was little opportunity for Bloom to see time, even if healthy – he was bench strength at best. He didn’t make his return to the pitch until well into the season in a July match against the Sounders – Bloom played the game out of position over on the left.  I remember watching him look like a deer in the headlights for the first part of the game – though who wouldn’t after not having played for well over a year and in an unfamiliar position.  By the end of the game he’d settled in and started to conjure up memories of the solid defender that we saw in 2014 and there was hope in the land!

He’d play in a few more games before once again being injured and didn’t return to action until late in the season when Steven Beitashour had a knock – should I mention that they lost that game?  Definitely all his fault (OK, not really at all) and why he didn’t play again until the  post-season (again, just kidding). He certainly helped to close out some games in the post-season and I don’t think anyone would have been upset had he stuck around for the 2017 season.   A solid defender and able to throw in some nice crosses was what he provided; nothing too flashy but he’d pop up and do something pretty good when you least expected. But as we all know he was selected in the expansion draft and gets to go play in his hometown for Atlanta United (AU guys!!).  Hopefully this is an opportunity for him to get some consistent playing time before the MLS level passes him by.  I’ve always liked Mark Bloom and sincerely wish his time here had gone better.

So long Mark Bloom – we’ll miss you and your uber adorable family, but we’ll always have this:

Mark: 16 – The career trajectory of Bloom stalled this season.  Hopefully it resumes climbing in Atlanta.

Duncan: 23 – didn’t play much, I remember him playing as a left back and it eventually working out ok. Genuinely wish him all the best in Atlanta, but I’m not distressted to see him go.

Steve – decent to solid at times

Jen – I like that he’s from GA, such a nice young man