Posted By Kristin Knowles on Jan 13, 2015 in News, Uncategorized | 5 comments 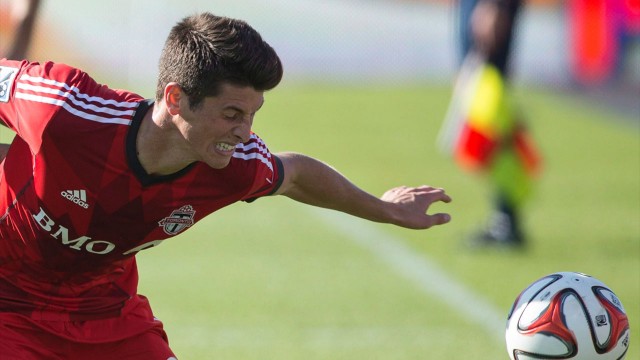 Toronto FC made the announcement today that Bloom is being rewarded for a solid year at rightback for TFC.  He became the surprise starter on the right for Toronto when no other solid options presented themselves for Nelsen and Co.  Bloom shone fairly brightly the first half of the season and was often one of the most reliable players on the pitch for TFC.  His ability to step into the starter’s role sooner than expected brought a grudging respect from most after he impressed in 2013 upon joining the team from the Atlanta Silverbacks.

His season went off the rails in July however when he was sidelined with an MCL sprain and missed five weeks of playing time.  He jumped right back into playing (and starting) after rehabbing the injury, but he never quite seemed himself the remainder of the season.  Still serviceable, he was more prone to errors and made rash decisions on the pitch.  More mentions of defensive miscues and the ease at which attackers got around him could be heard in the stands and read in post-match reports.  The bloom seemed off the rose for the latter part of the season – although that could be said for most of the team honestly.

However this is not to knock the work that he did over the season – Bloom was, as I mentioned, one of Toronto’s bright spots throughout much of the year.  When I look back on TFC 2014 his name is not one that often comes to mind when I think of the many issues that faced our Reds.   But you can’t discount the fact the defense struggled throughout most of the year with Toronto continuing to leak goals in what was yet another spectacular failure of a season  There were defensive issues across the backline (even Justin Morrow had off days), and even though he missed a good chunk of games due to injury you can’t leave him off the blame list.

In true MLS fashion the details of his new contract won’t be released until later on in the year when player salaries get released for us all to get upset and indignant about but really, Bloom has been woefully underpaid this past year so a raise of any kind is not only welcome by the Bloom clan, but very much deserved.  Unless he’s getting Caldwell money then maybe not so much; but as much as I’m certain TFC will do foolish things with their money I don’t think that they’re that foolish.  I’m very glad that Mark is getting paid and being rewarded for his efforts – although again, having positive things to say about TFC is weird.  Welcome back Mark, even if we do have to change your nickname now.