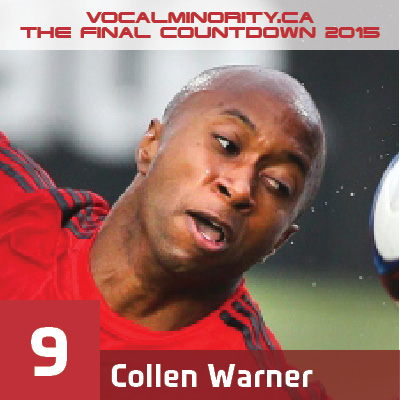 Collen Warner surprised me this year; he’d impressed a few times in 2014 but this year I found myself missing him when he didn’t play.   With the signing of Benoit Cheyrou it didn’t seem as though he was going to get a lot of playing time, but then as injuries and well, lack of depth reared its head Warner ended up starting in 20 games (playing in 29) in 2015.  What seemed to work best when he was on the pitch with Cheyrou and Michael Bradley was playing the VMP coined ‘holding winger’ position when the team was using a diamond formation during the summer.  Warner has a bit of speed but isn’t one to make marauding runs up the wing – he’s literally playing holding mid but on the wing.  Seriously, it’s fascinating to watch; and was quite effective for long stretches.

Otherwise there were a few games that he played the defensive mid position when Bradley wasn’t playing and well, he looked pretty good doing it.  It’s interesting the number of times we refer to lineups where the team has been effective without Bradley – I’m not saying that Warner should be starting over Bradley, but…well, until MB has a defined role anytime a player that well, knows his job steps in?  You’re going to notice a difference and such is the case with Collen Warner – he’s a somewhat versatile midfielder, knows his stuff, is going to score a few goals and will keep things tidy in the midfield.  He’s not afraid of a tackle (hence his 7! yellow cards) but they’re rarely bad fouls.  On a number of MLS teams he’s a starter and is one of those players that evey club needs.  Delighted that he’ll be back next season, even if it’s only as bench strength.  Oh and speaking of goals, he scored two (same as Robbie Findley) and here they are:

And one of the VERY FEW TIMES (I still dislike them intensely) that a short corner has worked.  And hey, not everyone can head the ball off their own knee:

Duncan: 14 A good year for Collen Warner, by Collen Warner standards at least, not quite sure how he dropped to 14 on my own list, but anyhoo… He’d played a bit here and there earlier in the season but really got a run in that May June run when we went with the diamond midfield and looked quite successful. In the V-Cup game against Montreal when I first noticed it, I was very confused “Collen Warner’s playing right wing!!??” but of course it was a ‘holding winger’ kind of role, relying on the right back, generally Justin Morrow’ to really provide the wing play. It worked very well, but eventually it didn’t and that formation was abandoned and Warner went back to being a sporadic presence as a sub or covering for an injury. He of course was covering for Michael Bradley in a DM position during that only game in the last few months where TFC looked good against a good team, vs New York. I don’t think the two bits of that sentence are coincidental at all.

Warner’s a very handy role player, plays his position, does it alright and doesn’t try to do too much. I’m happy to hear he’ll be back next season, hopefully he’ll be the backup to our as yet unknown very good defensive midfielder. The game against Columbus was the obvious high point highlight wise, a lovely pass for an assist on Giovinco’s goal followed up by a goal of his own. Then he outdid himself against Orlando with a goal and an assist on the same play; a cross came into the box after a short corner and alone at the back post, he headed it down and onto his own knee from where it bounced into the goal. Delightful bit of luck he more than earned over the season.

Tony: 12. Probably could have gotten more out of the useful Warner. His “defensive winger” role worked well but Vanney abandoned it.

Mark HSV: 7. Warner had a pretty solid season! He looked much better than he was in 2014. Should have been starting the crucial games where stability mattered at the end of the season instead of Findley.

Yelling at soccer 12. Did pretty well when he played, can’t remember any bad parts

TC St Clair 9. Did what he had been asked to whenever he stepped out onto the pitch. Does all the little things well. And scored TWO goals!

Jordylike 8. Girl’s name, man’s game. Solid as a sub, but the term “holding winger” bothers me to my core. That can’t be a real thing.

Zicogold 11. Unfortunately was not used as much this year

Jason Anderson 9. Every playoff team has a Collen Warner. Boring, effective, inexpensive. He’s like Panera. Does Canada have Panera? Is this reference lost in customs?

Alex Lach 7. The perfect super sub, showed again that he can be useful part of a midfield, sometimes when starting in the middle got lost in the shuffle with Bradley and Cheyrou. Provided that clam needed during times of panic in TFC’s game.

Mike Newell 8. Good off the bench option in midfield as a number 6. Was probably relied on too much this season hence the need for a new holding MF this up coming season.

Matt Goshert 6. Good solid player. Apparently he’s from Colorado. Man, you guys have a lot of Americans on your team.

Enrico S 15. Good role player to have around.

Aaron Bennett: 9 The most under rated player on the team.