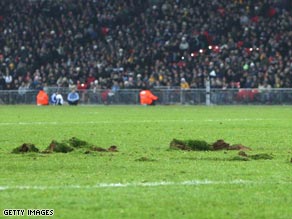 What could go wrong?

Been a long time since I’ve written anything really hasn’t it? There’s been no streams to watch, no updates on preseason beyond what the official website’s putting out, still no resolution to the ‘how do we fit under the cap’ question, precious little of the confusion, panic and drama you’d normally associate with a TFC preseason, it’s all remarkably professional.  Yes, this is what we’ve all pleaded for for so many years, but turns out this is just dull, good blogging it does not encourage. They haven’t even put out a strip yet, though hints were given out to Kurt Larson that suggest it’ll be going away from the basic TFC palette, maybe there’ll be some blue in there, perhaps something Blizzardy, which might be interesting. Some people think the idea of blue is some kind of blasphemy, I’m not so bothered by it at all. Anyway, what we do have this week is schedule stuff, a couple of nuggets dropped on us in the last couple of days.

First up was yesterday’s release of the Argos schedule, our first chance to see exactly what the grounds crew and magic paint removers would be working with (remember of course how we were recently told we’d need a 7 day gap to be able to properly replace the pitch with new turf summoned from the magnificently named Mount Hope (remember of course how for the longest time we were told the pitch would be no problem because they’d be using hybrid grass, just like Wembley so there’d never be a problem at all, now apparently Wembley has told them that even with hybrid you’d need to replace it, so may as well go with what’s easiest to replace, so just basic regular grass it is, but still why won’t the cynics shut up, it’s obviously going to work smoothly, just like Tim Leiweke said and Kurt Larson’s been enthusiastically arguing all this time. And oh by the way, there will be Argos signage around even though we were promised there wouldn’t be, just get used to it already, jeez. Anyhoo, I can’t bothered to track down the links.)).  What they have to work with is…..not that bad actually.

A 6 day gap, a couple of 7 day gaps, an 8 day gap, they can probably work with that. And this is with TFC’s schedule being condensed, in future years when they can play in March and April, it should get better.  There are some ‘yes but’s of course. if TFC qualify for the final of the Voyageurs Cup against Vancouver, they’d be hosting the game on the 21st, 2 days before the Argos home opener, more of a problem for the Argos than TFC as far as the pitch is concerned, but with it being the home opener there’ll undoubtedly be some Argos stuff in place around the ground as well, which would be distasteful. If we’re playing Edmonton or Ottawa it would be the 28th or 29th, so only 5 days after that Argos game.  Then of course there’s the playoffs, should both teams qualify, there’s a big chance of conflicts and problems right when it’s the most important. That might not come to pass, but we know for sure the Grey Cup final is November 26th, it’s seems fanciful to think TFC will still be playing at that time, but it’s a possibility.

I do genuinely think this won’t be a giant problem, it’ll be fine most of the time. I’d predict once or twice a season there’ll be minor problems, perhaps faint lines or a bit of a rough pitch, but nothing to really get worked up about (though no doubt the ‘i told you so’ crowd will be thoroughly annoying). Probably once every couple of years there’ll be a shitshow, either a scheduling conflict that can’t be worked around, or perhaps an argos game in a rain or snow storm that really messes it up, (and yes the I told you so crowd will be equally annoying then, plan on it.) Basically though, this was a good update.

The other bit of scheduling info to come out was the TSN schedule, so now we know the times for a lot more of the games this season, as seen right here.

The obvious thing that stands out is the amount of Saturday games in the evening rather than TFC’s traditional mid afternoon kickoffs.  A lot of people like this, for many reasons of varying purity and goodness. Some like the fact that it’ll be cooler, thus the players won’t be on the verge of heatstroke and thus more energetic and thus the games will theoretically be better. You can’t argue with that one really, most teams throughout the league play their games later on, presumably at least partially for that reason.  The other thing that really jumped out on twitter was the people who seemed really enthusiastic about what it would do for the atmosphere, suggesting it’d be much better and BMO Field would be rocking for those games, ie everyone’s looking forward to being very very drunk.  I don’t disagree with that either, the general buzz around the games should be better. I’ll also predict there’ll be a lot more obnoxious drunken douchebaggery as well, people just there for the party. Hopefully wherever your section of the stadium is won’t get too many of those people. It’ll be a fine line.

As for me, I’m kind of grumpy about it, my Saturday afternoons are almost always less busy than my Saturday evenings, this increases the chance of conflicts and thus increases the chances of me having to miss games, cos I’m sorry TFC but the time when I’d organise around you rather than hoping you fit in has long gone.  I do think the games I go to in the evenings will probably be more fun though, so it’s a toss up really as far as my own personal preferences go. For the standard of the game though it should be better, so I’ll give it a minor thumbs up, at the very least it’s worth a shot to see how it plays out.

So some of the scheduling pieces are now in place, the canopy gets put in place hilariously high over the top of the South end on Sunday, and hey TFC have a new Communications Director and what do you know it’s Michael Bradley’s uncle! Things are coming together, now we just need something actually football related to happen.