Home » News » Tsubasa Endoh’s up with a first team contract.

Tsubasa Endoh’s up with a first team contract.

Posted By Duncan Fletcher on Feb 27, 2016 in News, Uncategorized | 0 comments 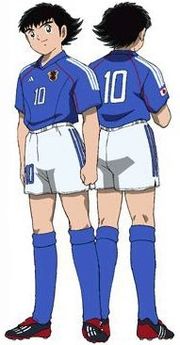 Tsubasa models the new kit. Yeah it’s blue. get used to it!

All along it seemed like it was going to come down to a battle between Tsubasa Endoh and Mo Babouli for who’d take the 28th and final roster spot for TFC. Yesterday’s release of Luke Moore took some of the pressure off with the team now having the option to choose both of them if they want to.

Anyway, that contest has now officially come to an End, leaving Babouli saying D’oh, as TFC announced today that they have signed Endoh to a contract with the big team. It’s not surprising really as Endoh has got a lot of time in pre season and by all accounts (generally the team themselves seeing as they’re the only ones able to watch most of it) has impressed, so there’s definitely a chance he might make it into the starting lineup when things get serious next week. Not bad for a 9th overall draft pick that puzzled most of the experts when it happened.

If he does make the lineup, pre-season suggests it will be on the right side of the forward 3 in Greg Vanney’s 4-3-3 system. Alongside Jozy Altidore and Sebastian Giovinco, it seems clear that his role in that little boy band will be ‘the defensively responsible one’.  He’s been praised many times for his engine drawing the ultimate TFC compliment of being compared to our lord and saviour Michael Bradley when it comes to work rate and running and all that. If it’s optimistic to suggest the 4-3-3 will easily morph into a 4-5-1 when it comes to that whole defending unpleasantness, it seems reasonable to think that Endoh should be able to ensure it at least falls into some kind of lopsided 4-4-2, and maybe that might be enough. Steven Beitashour is by all accounts very good at the attacking side of being a full back so hopefully the two of them together will provide to be a well balanced pairing that won’t be the absolute nightmare the right side often turned into last season.

As mentioned earlier, there’s space for TFC to sign Babouli as well if they want to if they need a bit more of a creative attacking presence for that right forward spot, and that might well be something TFC need at certain points, say if they’re behind late in a game, or if Giovinco’s off playing for Italy or something. For now though, and especially with an 8 game away trip to start things off, I’m good with a hard running player with a bit more of a defensive presence for that spot.  There are of course no guarantees, he hasn’t yet played a proper pro game, but it seems like his pre season has justified the 9th pick and earned the contract so why not see if he can now justify a continued starting spot. Helping TFC become a somewhat defensively responsible team might just be the most outlandish Captain Tsubasa storyline ever, let’s hope he pulls it off.