Home » Match Previews & Reports » After all the narratives, I’m ready to open wide for some soccer. Canada v China kicks off the Women’s World Cup.

After all the narratives, I’m ready to open wide for some soccer. Canada v China kicks off the Women’s World Cup. 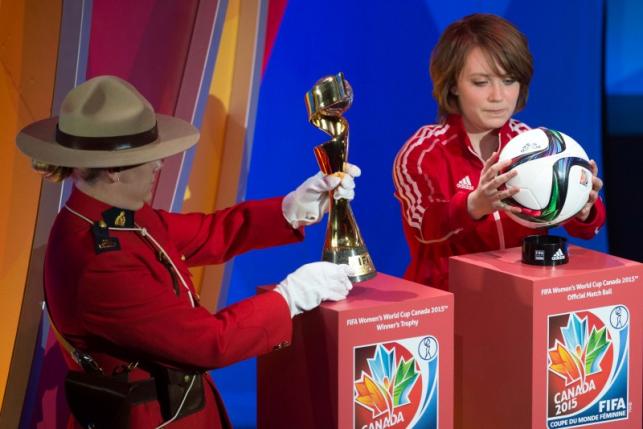 The World Cup is here, the world cup is here. Finally some football to talk about as you’ve probably had your fill already of all the narratives fit or unfit to print as a lot of media kicks into big event mode to cover a sport they barely pay attention to on a regular basis.

Not having games in Toronto is a disgrace and a huge blunder (sure, but come on now, we’ve known about this for a long long time, find a better way to do your trolling.)

Playing this tournament on turf is sexist! (Sure, in a way, but it’s a much more complicated argument than that, and again, we’ve known about this for a long time now)

Will there be enough people in the stands? What will it say about Canada if there isn’t? (Probably, there’ll be a few poorly attended games, but all in all it’ll do well, it’ll end up the most attended WWC ever and it won’t say much either way really, relax.)

Is Sydney Leroux a traitor or the noblest dream chaser that the world has ever seen? (neither really, if we’re forced to put our sensible non supporter hats on.)

Will any FIFA representatives that dare to actually come over for the tournament be arrested and extradited? (Hopefully, ‘overshadowing the great work blah blah blah’ be damned, that’d be wonderful entertainment.) and so on and so forth.

You can of course catch some actual analysis of the players and teams and their respective chances as well. Hopefully as the tournament goes along, there’ll be more of that stuff in the big media, but for now blogs are the best way to go for that, I’ll pause here to go back to my roots and recommend Waking The Red‘s coverage, and throw in Canadian Soccer News and Red Nation Online while I’m at it.

Here at the Vocal Minority, we’re not going to attempt any kind of in depth coverage, I’ll not pretend we have the time, access or expertise to pull that off. We’ll cover the Canada games as best we can with sporadic updates of other stuff throughout the tournament when it tickles our fancy, whether big and important or just the fun nonsense that crops up here and there.

But anyway, narratives somewhat pushed aside, there’s finally games to focus on and properly preview. Of course there’s the opening ceremony first, which is always usually good for a giggle as the organisers desperately try to cram in nods to the host country and all the other competitors and the game and what it means for humanity and all that sort of thing into a short ceremony that’s always too earnest for it’s own good. Here’s the official blurb.

The Women’s World Cup Opening Ceremony was created by the National Organising Committee to celebrate key values of the competition: the empowerment and unification of women, a celebration of the game and the concept of striving To A Greater Goal™ – a greater goal for sport and for humanity, beginning with girls and women.

Told through the eyes of a little girl, a soccer player, the story will centre on the finest attributes of the game and highlight the lasting legacy and global impact of a tournament featuring successful and empowering women from around the world. Inspired by key messaging portrayed in the colourful, multifaceted official look of the FIFA Women’s World Cup Canada 2015™, the show will be divided into various scenes important to the story of the central character, a young female soccer player.

Sarah Mclachlan, and Tegan and Sara will be part of it, I’d also expect Mounties, some first nation stuff, and way too many smiley dancing kids. All crammed into 10 earnest and hilarious minutes.

Then finally, 600 words in to this, the game. We start of course with Canada taking on China, or China PR to give them their full name (which just puts in my head the idea of a TFC PR football team, they’d be the greatest entertainers since Kevin Keegan’s Newcastle. Enthusiastic, creative, offensive, obnoxiously full of themselves, and always eventually finding some way to fuck it up, much to everyone else’s amusement). It’s a game Canada should win, though I wouldn’t make them overwhelming favourites, a tie or defeat wouldn’t be an absolutely outrageous upset. That’s pretty much their entire group though, expanding the tournament to 24 teams will lead to some mismatches and grotesque beatings, but not in Canada’s group. It’s also not a group of death though, there’s no really good team to be confronted like Sweden or England so they should find a way out after 3 close and tense games.  Take Canada out (or if you don’t care about Canada) and it’s a pretty unremarkable group narrative wise, but that might well lead it to be one of the better ones in terms of the football, there should be plenty of close well matched games and last day drama.

After all the fluff pieces and optimistic ‘hey Canada’s in with a serious chance of winning this, make sure you check out our coverage at….’ pieces are said and done, it’s crunch time for Canada. A lot has been made of the work John Herdman’s done over the last 4 years to prepare them mentally for this, will it all pay off.  Will they be inspired by the home crowds and ride a positive wave of momentum to top their group and make it deep into the knockout stages? Or might they not get off to a great start and then crumble under the pressure 2011 World Cup style?

I’d guess at neither of them, instead getting some good performances without ever really convincing, a couple of narrow wins in the group stage then muddle their way through to the quarter finals, if things go their way, the semi finals before losing to the first really good team they face. Honourable enough, if not ever really inspiring.  You know, kind of like what we saw in Hamilton last week.

The big question that that game brought up was ‘where are the goals going to come from?’ Christine Sinclair, Adriana Leon and Melissa Tancredi barely got a sniff of goal in that game and while Sophie Schmidt should certainly be thought of as a legitimate goal threat, a goal like she scored against England, that’s going high or wide 9 time out of 10. We certainly need to see more there.

Defensively Canada seem solid enough, we saw Josée Bélanger at right back in that game, and after a wobbly opening, she didn’t look that bad, certainly contributing up front, will she stay in the position? That probably depends on the injury status of Rhian Wilkinson or Marie-Eve Nault.

I’ll predict a nervy and unconvincing 1-0 win for Canada in this one, and given all the surrounding nonsense of pressure of the opening game, I’d be more than happy with that. Though I’m sure tournament organisers and media would love a big win and a positive performance to build momentum and hype for the rest of the tournament, 3 points is really all that matters here, that’s the mindset the team has to have now. It’s no longer about promoting the game and the tournament which they’ve done great work with over the last year or more, it’s simply about the games, about winning.

After that, well hey there’s the Netherlands vs New Zealand. The Dutch are seeming to be the hipster dark horse pick with a few people predicting they could do better than expected and surprise some teams, though generally with the ‘2019 will be when they really shine’ caveat, so I’m intrigued to see how they do, especially as they’re Canada’s opponents in the crucial 3rd game. With very little knowledge to base anything on here, I’ll go with a more entertaining 3-2 win for the Dutch. Why not.

This should be a fun month or so. The obvious narratives can quiet down, though of course never die, there’ll finally be some football to talk about.