In a nutshell : It’s a solid away kit.
The inside collar says : none
The outside back collar has : Atlanta United
The jock tag position has : none
The sleeve has : ATL UTD

Sometimes tweaks to a template is a good thing, especially when you’re trying to establish your visual look and identity. This kit has two colours only : red and grey. It’s a grey shirt with horizontal pinstripes with a ringer collar, red cuffs, red side Adidas striping from armpit to hip.

Some people have issue with sponsors, and sometimes I do, but I’m ok with it if they play along. And the sponsor here does. The Adidas logo, the sponsor, and the badge is all red. It’s a tidy bit of kit. Far from a classic, but it’s nice and casual.

Get if you : enjoy nice looking grey kits, like pinstripe hoops done well

In a nutshell : Still orange, still using the terrible blue as an accent.
The outside back collar has : Forever Orange
The jock tag position has : State flag of Texas 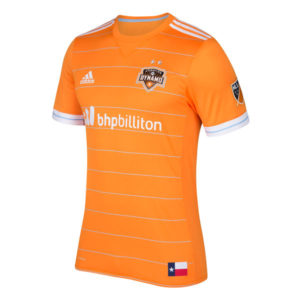 Two things that irk me about this, the co-opting of the flag of Texas and not using that dark brown within the badge. First off, much like Toronto co-opting the national symbol for an, at best, regional club, using a state symbol given that there’s another team in the state is a bit desperate. Secondly, brown goes with orange better than stupid light blue. Lean on that more, Adidas.

Get if you : didn’t like gradients but love weird coloured horizontal pinstripes.

Compared to previous kit : It’s too close to call. 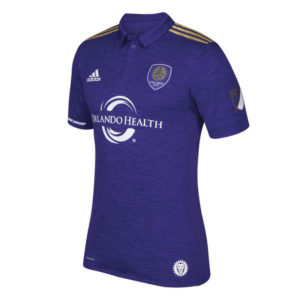 The purple heathering throughout the fabric gives it a casual feel. Looks more like a club golf shirt than a kit, especially with the purple button collar. Peanut butter brown shoulder stripes, white Adidas markings, sponsor, latitude and longitude markings on the right cuff.

It’s oddly plain, and that’s not necessarily a negative. It kinda works in it’s simplicity and lets the heathered background do all the heavy lifting.