Kit Nerd Corner : Seattle away, RSL away, Montreal away

In a nutshell : Oh shut your face, that’s nice.
The inside collar says : Sky of blue, sea of green
The outside back collar has : Seattle Sounders NASL logo
The jock tag position has : Made in 74

Compared to previous kit : Crushed it.

That’s just not fair. Seattle, the inventors of soccer, had such nice colours before they changed them. I’m surprised it’s taken them this long to dip into that pile.

It’s a white kit with aqua blue Adidas top stripes, aqua cuffs and aqua button up collar. As much as the “Born in 74” is a consistent eye-roll around these parts, it’s seeing the original Seattle Sounders badge on the back of the neck in full colour (as compared to just one colour) has my inner badge nerd swooning.

I tried to talk myself into knocking a point off for the star over the badge, but… I’m willing to overlook it.

Get if you : truly wish it was 1974, like aqua collars and a nice white kit, really like Seattle but really hate their colours, like nice things.

In a nutshell : A kit that’s screams “out of ideas”.
The outside back collar has : Lion shield secondary mark
The jock tag position has : Flag of USA
The sleeve has : RSL as one 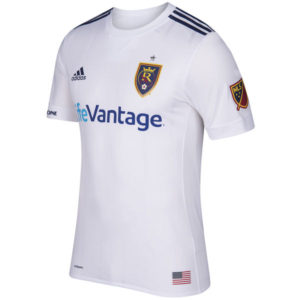 You ever go into a sporting goods shop and head over to the soccer department, you find the blank shirts that are sold as warm-ups and cost about $20-30? I know most replica kits are this with a sponsor and a badge and a 400% price markup, but Adidas usually tries.

They didn’t on this one.

It’s a white kit with a sublimated striping pattern in the chest. White ringer collar, white cuffs, USA jock tag (not Utah or Salt Lake City?!?!), navy Adidas top of shoulder stripes. Even the sponsor couldn’t match the navy on the front. There’s 3 different blues on the front of this white kit.

Hey Adidas, RSL, here’s a freebie for the next one : Navy with gold pinstripes and red trim cuffs and button up collar. Boom, a 4 out of 5 right there. Took 15 seconds.

Get if you : like your kits largely virginal, don’t care for flash, have collections of kits of teams you really really REALLY like

In a nutshell : a solid tribute to the city
The outside back collar has : Representation of the original coat of arms of Montreal
The jock tag position has : Montreal 375 celebration logo 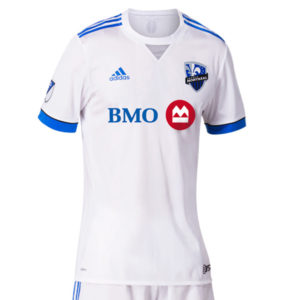 White kits seem like they could be a mistake. They’re typically boring and ordinary. Some get it right (see Seattle away) and some get it wrong (see RSL away).

Montreal found a middle road on this one. Blue cuffs with black trim, blue top of shoulder Adidas striping, white ringer collar with stupid faux v-neck triangle below it, which appears to be grey or have reflective materials in there (and it looks like they had extra ones lying around and decided to throw’em on!).

The front of the kit has embossed stripes which look really nice. The bonus marks are awarded for the city logo celebrating the 375th birthday of the city in the jock tag position, and the original coat of arms on the back of the neck. Too bad the sponsor couldn’t play along with the colours on the away kit.

The sock game is ON POINT SON! 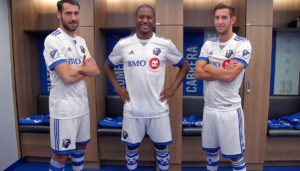 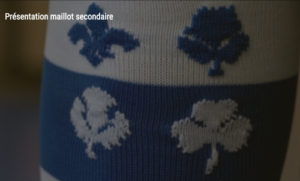 Blue and white hoops with the four flowers that appear on the flag of Montreal (thistle, rose, shamrock, fleur-de-lis). I have no hook-ups, but if you have a hook-up and want to do me a solid, I’m very interested in a pair…

Get if you : like white kits, love dope socks.