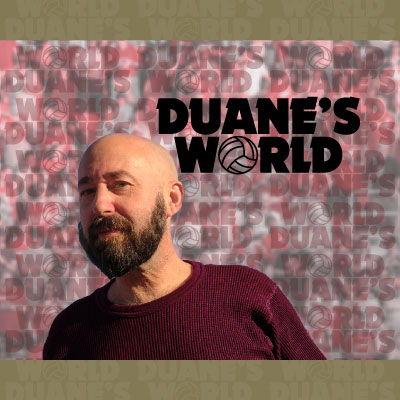 I want to talk about Chad Barrett for a moment.

The Chad. Duncan’s beautiful, long-gone, but not forgotten Chad. The striker who couldn’t find a net too open to miss, a ball too far away to chase, or a bro too bro-y to out bro.

In hindsight, he’s become symbolic off the simple joys that we all got watching TFC the Bad – a glowing example of the lovable losers that we all fell in love with as they slowly drove us into rehab from 2007 to 2013.

You would have a hard time finding anyone in Toronto to say bad things about The Chad nowadays.

It was much, much easier to find the critics when Barrett was wearing Red.

Then, it was far easier to find fans that wanted to hang him up by his toenails. The Chadster was blamed for everything from TTC signal repair delays to global warming to, well, TFC sucking. Toronto has a long history of scapegoating players on their sports teams. Barrett is part of a long (proud?) tradition that starts with NHL Hall of Famer Larry Murphy who dared not win the Stanley Cup for the Leafs, and runs through to today when Jonas Valančiūnas, a perfectly good NBA player, is routinely seen as the reason the Raptors can’t get past LeBron.  Toronto FC fans have played along with this since the start: Nick Garcia, Doneil Henry, Damien Perquis and, as stated, The Chad have all filled the role over the years.

It’s only after these guys have left that we start to appreciate how much of a warrior Garcia was in an impossible situation, how athletically gifted Henry was, how Perquis was more overpaid than bad, and how Barrett would run through a damn wall to get to a ball and that his overall value to the club was worth the occasional frustration of a missed sitter.

The simple truth was that if Chad could have figured out how to consistently hit those sitters he would have played at a higher level than MLS.

At any rate, there is a point to this. That point is this: Even when Toronto has a winning team we can’t shake the instinct to find a whipping boy to place all our frustrations on. For the 2017 Mighty Reds of Liberty Village that player is Panamanian international Armando Enrique Cooper Whitaker.

Our Armando has one thing in common with most of the other TFC players on the historic shit list – he gives the ball up sometimes and he has done so in positions that are, shall we say, less than ideal, a couple times this year. Once you get the reputation amongst fans of being a player that coughs up the ball too much you’re screwed. It no longer matters how often you do anything good with the ball, the fans are going to immediately jump on any mistake that happens and it will inevitably be that moment that they will be muttering about as they drift off to sleep after the game.

Before going further forward, let’s take a step back. All the way back to Saturday night. On that night, Cooper had an attempted pass to Giovinco intercepted in the middle of the pitch. That allowed Colorado to break back quickly and ultimately score the tying goal on a great effort by Dominique Badji.

The fall-out to Cooper’s failed pass was swift and it continues. But, let’s take a closer look at it. 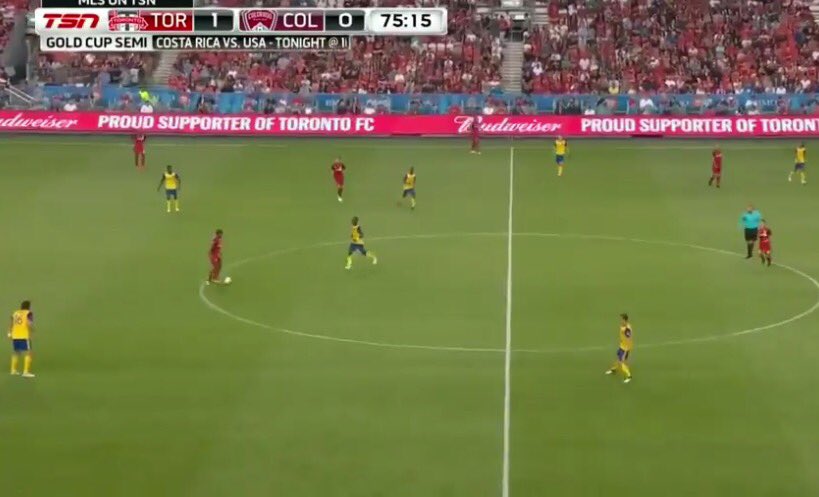 This is the moment Cooper received the pass in from the side. You’ll note four TFC players standing basically static along the sideline. None were viable options for Cooper. Similarly, two Rapids players were effectively taking away the back-pass option.

He had two options – He could have blasted the ball high and forward towards touch in the hopes that one of the wide players could track it down. That would have been safer, but almost certainly resulted in a turnover to Colorado, albeit in a safe area of the pitch.

The other option was the one he took. He attempted to find Giovinco in space to start a break for TFC. In real time it seemed like he might have forced the ball in, but as you can see in the capture there was a thin opening there. Maybe not one you or I could thread, but an opening none the less.

However, the Rapids’ player was closing fast and managed to get his trailing leg out to block it to Alan Gordon. You know the rest.

Cooper is not without fault here. Clearly, he was the player that had his pass intercepted.  He could have been quicker to thread the ball, or he could have squared up to try and draw a foul or at very least slow a potential break down. Instead he tried a high risk, high reward play that ultimately failed.

However, to take all blame away from the rest of the team is a bit much. The four players on the wing remained completely static. Where was Cooper’s escape pass? Other than the Row Z idea there wasn’t one. Also, should the ball have gone inside at all? Cooper is surrounded by yellow. Perhaps a safer play out to the wing and then forward would have made sense?

Lastly, why did Greg Vanney put Cooper into that role in the first place? Cooper is a high risk; high reward player. That’s useful (more on this in a minute), but you want the ball on the feet of a Michael Bradley type (if only TFC had one of those) in that part of the pitch at that part of the game.

And, this goes without saying that had TFC just scored more damn goals then it wouldn’t have mattered, but let’s not get bogged down by this single play. Instead, let’s examine if Cooper is, in fact, as useless as many fans seem to think he is.

The conventional wisdom is that he has added nothing positive to the season and has only contributed a handful of costly giveaways. Warning: to examine this we’re going to need to look at advanced stats (from Whoscored.com, specifically).

When you look at Cooper’s underlying numbers a few things immediately jump out. Yes, he does give the ball away more than most players on TFC. He’s the third most “dispossessed” player on TFC and has the fourth most unsuccessful touches. Here’s the thing about giveaway numbers though – they tend to be highest amongst the best offensive players. Giovinco is No 2 in both categories! Jozy is No 1 in bad touches.

The more creative and offensively aggressive a player the more times they give the ball away. Now, you can argue that Cooper’s pure production numbers (he has yet to register a goal or an assist) don’t match the giveaways and that would be fair. He does have some decent underlying indicators there (he ranks fourth in shots per 90 and key passes), but it’s fair to want more pure production here.

There is an area where Cooper really stands out though – his creativity metrics are amongst the bestin MLS. Not on TFC, in the whole league.

His 1.8 successful dribbles per 90 ties him for seventh best in the league. This puts him on the same page of the stats as Piatti, Acosta and Nagbe among others. He’s also the 17th most fouled player in MLS, ahead of players like Dempsey, Jozy and Schweinsteiger. Considering TFC has two of the best free kick takers in the league in Vasquez and Giovinco that seems like a decent skill set to keep around.

This is not to argue that Cooper is above criticism. He has had some howlers and he is far from a perfect player. However, we shouldn’t let snap shots of his most negative play dictate our entire perspective of him. Drawing a foul 40 yards from goal that maintains TFC pressure and ultimately results in a goal 2 minutes later is important, but not memorable.

The biggest issue with Cooper might be that it’s hard to find a position that he naturally fits into now that Victor Vasquez is here, but there’s likely no one else on the roster that could step up and fill Vasquez’ role if he were to go down to injury. If TFC finds itself in desperate need of a goal in the playoffs Cooper will prove to be a great, creative option off the bench. And, finally, having a little CONCACAF on the roster isn’t a bad thing either.

Bottom line is it’s OK to be frustrated by Cooper, but it would be a mistake to wish him gone.

And not just because it would be a near guarantee that he would score a brace against TFC at BMO Field if the Reds were to trade him within MLS.