Posted By Tony Walsh on Mar 7, 2015 in Malarkey, Uncategorized | 0 comments 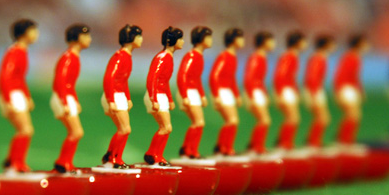 As your brand spanking new Tee Eff Cees embark on their “Quest for a Play-In Match”, we bring you this handy A(ltidore) to Z(avaleta) guide to the 2015 squad. Chock full of hard-hitting investigative journalism, fascinating statistics* and shocking facts* (*not necessarily statistical) (* not entirely factual), we urge you to print up this list, stick it to your fridge, above your toilet or to someone you love and see how many of these lads are here in October.

#17 JOZY ALTIDORE – F
NATION: USA
NICKNAME: “Joe-Z”
SHOCKING FACT*: Was awarded a heritage preservation award in Sunderland for his help in protecting the sides of barns in the Wearside-area
PREDICTION: Having every chance to be the striker TFC has sought since 2006

#12 JOE BENDIK – GK
NATION: USA
NICKNAME: “Super Pickle”
SHOCKING FACT*: Once cleared a ball so horizontally he gave away a corner
PREDICTION: Launching balls into the fancy sideline tables. Hilariously ruining the cocktails of the wealthy.

#25 ALEX BONO – GK
NATION: USA
NICKNAME: “Sonny”; “The Edge”
SHOCKING FACT*: Refused to join both a U2 and a Sonny & Cher tribute act while in university
PREDICTION: Hearing us sing “I Got You Babe” every time he makes a save

#4 MICHAEL BRADLEY- M
NATION: USA
NICKNAME: “The General”; “The Capnapper”
SHOCKING FACT*: Has a luxurious full head of hair but thinks it makes him look like a “damn little kid”
PREDICTION: Playing too deep; Decision-making; Talking in monotone

#18 MARKY DELGADO – D
NATION: USA
NICKNAME: “Carlos”
SHOCKING FACT*: Is one of 800 former Chivas USA players and staff now with TFC
PREDICTION: Talking about how cold it is here. A lot.

#55 ROBBIE FINDLAY – F
NATION: USA
NICKNAME: “Ro-Fi”
SHOCKING FACT*: Despite a long career at Real Salt Lake, he never met any members of the Spanish Royal Family
PREDICTION: Not looking quite so useful when salaries are released

#19 DANIEL LOVITZ – M
NATION: USA
NICKNAME: “The Critic”
SHOCKING FACT: Has been a member of NYCFC longer than Frank Lampard
PREDICTION: Not playing poorly enough for fans to yell “It stinks!” at him

#20 CHRIS MANNELLA – M
NATION: Canada
NICKNAME: “Half Man. Half Nutella.”
SHOCKING FACT*: No one quite knows what he looks like
PREDICTION: Signing autographs and watching people walking away reading it to see who that was

#15 ERIQ ZAVALETA – D
NATION: USA
NICKNAME: “The Nifty Nephew”
SHOCKING FACT*: Cried when he found out that his uncle was Greg Vanney and not Bruce Arena
PREDICTION: Getting a smack every time he says “Unky Greg” out loud