In a nutshell : new sash

The inside collar says : nothing
The outside back collar has : GALAXY
The jock tag position has : “This is LA”
The side Adidas stripes are : navy 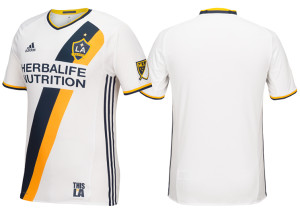 LA has had a very nice streak of solid home kits, and it continues with this season’s offering. Usual white top with navy sash (Philadelphia, use THIS navy!) and just below it is a slightly smaller gold stripe to compliment the sash. The gold is light enough not to take anything away from the navy against the backdrop. From the photos, it looks far less complex than previous designs, however there is nothing wrong with simplicity. A shallow navy and gold trim V-neck collar and the new side three stripes are enough to notice them, but not so much to take away from a (predominantly) nice white kit.

Maybe with their sponsor changing their work mark on the front and going from one to two lines, it feels like the gap breaking the sash is larger than previous offerings, though it could be exactly the same.

Get if you : have got a collection of these and want to keep the ball rolling, need an excuse to replace that Juninho kit, like nice things.