In a nutshell : soooo many circles on a shirt

The inside collar says : “This City Never Sleeps” as well as the word “City” below that
The outside back collar has : nothing, surprisingly
The jock tag position has : interlocking NYC from the badge
The side Adidas stripes are : orange 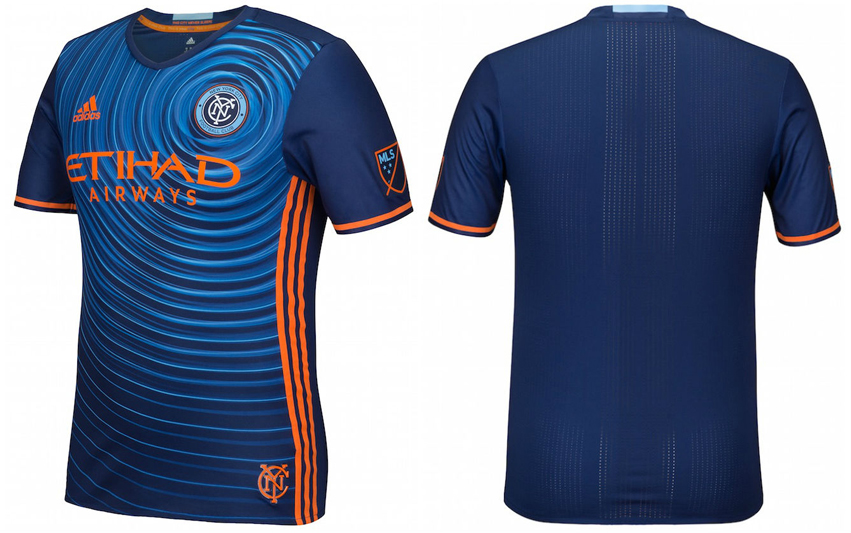 Concentric circles. The doppler effect. Ripples of water caused by a droplet.

However you describe this, you could throw in a few “ugh’s” and not be far off.

NYC have offered an improvement from their phoned in kit from last year’s black offering with this predominantly navy kit, featuring a metric crap-ton of circles. The circles focus on the badge and then grow out from there. Thankfully, this pattern is limited to the front of the shirt.

Beyond that, it’s navy sleeves and back, navy collar, orange trim on the cuffs, side Adidas stripes, sponsor and manufacturer logo. 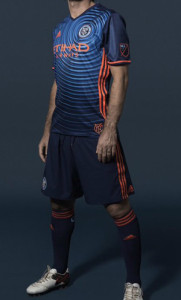 If you were to buy this shirt, wearing it “proudly” could be mistaken for not knowing what “proud” means. As a stand alone shirt, it’s nice except for the front part – the part everyone focuses on. It’s loud and a little hard to look at for long periods of time.

However, as part of a full kit, it’s not half bad. Navy shorts and socks with obligatory Adidas trim in orange, and, as strange as it sounds… it’s OK. It doesn’t stray too far from Portland’s new away kit, in that from a distance, these will look pretty good. Even the sponsor looks a bit washed out.

I wouldn’t want one, even if I was a supporter, but it looks just fine on the pitch from the stands.

Get if you : need a bizarre goal keeper shirt for your house league team, but want to spend $100 for it, really REALLY like circles on things