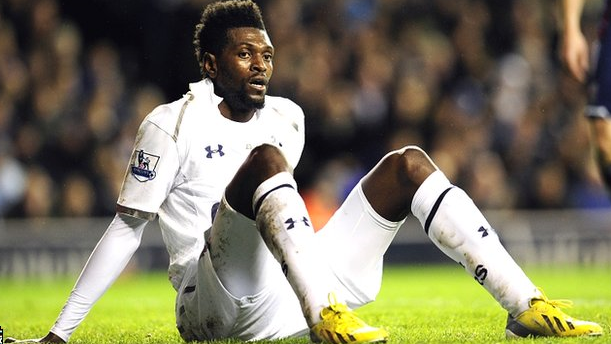 Let’s just sit this one out.

While TFC’s lustful gaze in the direction of Jozy Altidore is gaining the most traction on the rumour mill today, their apparent interest in Tottenham’s Togolese international striker Emmanuel Adebayor won’t go away. It really needs to though.

For those out there who don’t also support one of Adebayor’s former clubs (or in my case, his current) you may be saying “why wouldn’t TFC want an international talent like Ade?” For that answer, find your local supporter of one of those said clubs ­and ask them. The answer will likely be a plethora of curse words, indignant anger, fear, loathing and hair­pulling frustration. What you won’t find are any bridges left to the player’s past, ­they have all long been burnt to a crisp.

To put it in local terms: Defoe OUT / Adebayor IN would be the most TFC’ish move ever. Sick of Jermain Defoe’s primadonna drama and hot and cold nature? In time, Emmanuel Adebayor would make our L’il Bloody Big Deal look like the ultimate team player.

Adebayor would be so easy to forgive and forget if he wasn’t blessed with a natural talent for goal scoring. I am in no way trying to say that an in-form Ade wouldn’t be able to match Defoe’s MLS goal tally but like his former teammate, the problem isn’t in his boots,­ it’s in his head. Adebayor has always had a polarized personality. The affable, happy goal scoring threat one match is so often replaced with a sulky, uninterested failing poacher the next. His penchant for feeling persecuted by his club is all too often at the root of his self-­imposed nature.

Many of his former clubs have attempted to overlook his mercurial record because when he is “on” he can be a tremendous asset up front. When he is “off” however ­ you may as well be playing with 10 men. Here’s the rub, he has been “off” far more than “on” in the recent past. This year he has been dogged with mysterious “personal issues” that have seen Spurs let him return home to Togo while simultaneously blaming his own lack of luck on the pitch to his mother’s use of “juju” witchcraft against him. TFC have had plenty of wacky injuries in the past;­ juju would be new.

So is TFC really in with a shout for Adebayor? There are probably 170,000 British Pounds Sterling per week that say no. The player has turned down potential moves to Turkey and Italy for example as his suitors would not match his astronomical wages. Sure Spurs are shopping him to MLS – ­they are truly desperate to unload all or most of that contract and move on with their lives.  Just as every one of Adebayor’s former clubs has. Looking at the way a player is regarded at his past clubs is often a safe indication of his future success.

For a club like Toronto FC who has suffered the perils of toxic dressing rooms nearly every season, this potential acquisition could be the worst of all. Would he score goals – ­albeit at a ridiculous wage – ­for The Reds? Yes. Would TFC be trying to offload his contract after he has mentally checked out a year from now? Bet on it.

This is juju that TFC needs to steer well clear of.