Welcome to the very first match-up in what is quite possibly the world’s leading online football mascot battle – Mascot Hysteria! Every fortnight, (mascots love the Queen’s English. Fact.), we will bring you a head-to-head battle of two football club mascots – and then you, the Vocal Minority reader, will decide which of our furry, fluffy, googly-eyed heroes wins the match and stays on to defend their title!

It is a great responsibility we are bestowing upon you dear readers. Put your club allegiances aside and after considering the nearly somewhat facts offered in each challenger’s section, make the call on who wins this fact-to-beak-to-snout-to-miscellaneous fight.  The high-end Vocal Minority International Mascot Database, (located somewhere kilometres beneath The Alps – we think) will keep a tally of which mascot holds the title the longest, and that fuzzy bastard will be crowned the overall champion at year’s end.

As the title is currently vacant, we start with two new challengers this week as MLS Cup Winning Cozmo of the LA Galaxy takes on Swindon Town’s Rockin’ Robin!  Suit up lads – May the most mascottiest of all mascots win! 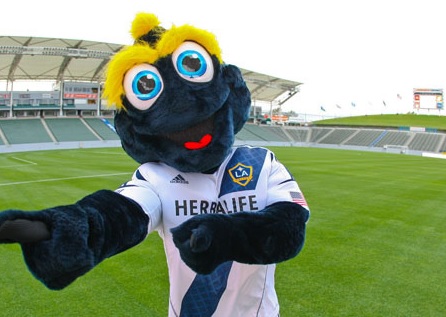 BIOGRAPHY:  Cozmo’s origins are as much a mystery as his species.  Claiming to have crashed to Earth in a failed attempt to retrieve his planet’s queen (Victoria Beckham), Cozmo decided instead to make suburban Los Angeles his home.  Drawn by the bright lights and starlets of Hollywood, Cozmo has become a hit on the socialite circuit, dating numerous Kardashians, Hiltonses and Donovi.

Controversy found the Galaxy playboy however, when paparazzi program TMZ claimed to have proof that Cozmo was actually a former Jim Henson Muppet character that was expelled from the famous puppet factory roster due to his extreme Ecstasy addiction and unpredictable mood swings.  Earthbound or not, many have been mesmerized by his elderly British man’s eyebrows, making leaving your drink unattended around this navy blue bad boy always a no-no.

CATCHPHRASE:  “I have to drop my pants…cuz I’m Outta Space!” 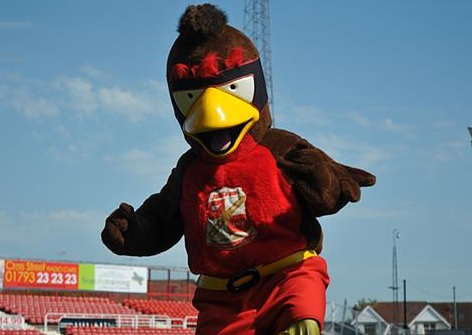 BIOGRAPHY: After being cut during the audition process for the original Angry Birds video game, Rockwell Robin III led a life of vice throughout the western regions of England. Briefly a hit in the all-male mascot strip club scene due to his bulbous red breast, Rockwell found himself unfulfilled and becoming a disgrace to his family name.

It was a phone call from fellow Robin, Robin Gibb, that turned Rockwell’s life around and saw him harness his stripper moves into wholesome family gyrations while his natural anger was channelled into taunting the opposition of his new employer Swindon Town FC. Also, knife fighting. “Rockin'” as he goes by now is married to a former Miss Wiltshire and enjoys twigs and staring at Oxford menacingly.

CATCHPHRASE: “Your bird is angry… that I didn’t call her back!”