Motherfluffer – it’s time for another round of Mascot Hysteria!

After a few weeks hopping riot over international football mascotry, Virginia’s raging Anti-Newzealandite and Richmond Kickers booster Kickeroo has been sent outback. Despite his previous dispatching of Tigrao and Sammy the Stag it was a new Sammy that tripped up the cocky marsupial – Southend United’s Sammy the Shrimp. With a solid 68% aggregate vote, the Essex decapod did away with Kickeroo with a flick of his alarmingly pointed head.

There is no time for the sassy scampi to celebrate with a bass-thumping drive up and down the pier-side streets of Southend-on-Sea though – no, the next round of this globally recognized competition is already upon us! A new challenger awaits and as always, it’s you the Vocal Minority reader, who decides the winner so plush the vote! Simply do one of the following: put the name of your winner in the comments section (Comments always welcome!); vote in the handy poll below; or, send the name of your winner to @vocalminorityCA on Twitter with the hashtag #MascotHysteria 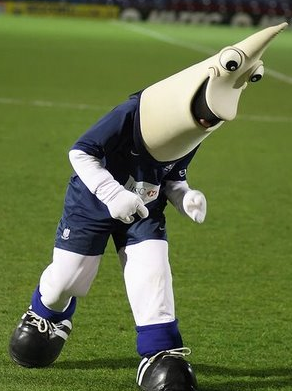 BIOGRAPHY: Do you hear that sound? No it’s not dubstep being blasted from a customized Ford en route from Chelmsford to Southend but a klaxon to all other footy mascots that there is a new champion in town! Lad; gent; activist; supporter; decapod. Sammy the Shrimp’s journey is your classic Thames Estuary-to-riches tale. Emerging from his self-proclaimed “bad boy years” to his time as a popular local techno DJ and finally becoming a valued member of the seaside community, Sammy is an all-rounder.

While the extra attention as a Mascot Hysteria champion will no doubt drag Sammy back into the glamourous Essex nightlife, he assures Southend supporters that his feet – or whatever shrimps have – will stay firmly planted in the community. While his club’s season is wrapping up, his campaign to outlaw sushi and a lawsuit against Toronto FC for using the words “Southend Supporters” in promotions will continue with new vigour.

CATCHPHRASE: “I’m gonna Essex you up!” 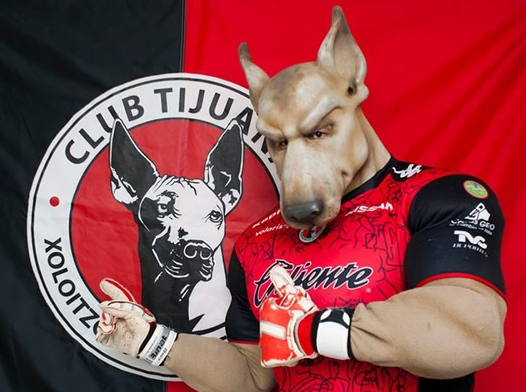 SPECIES: Blood Hound (not to be mistaken with Bloodhound)

BIOGRAPHY: “Please! Just spare the women and children!” is the refrain most yelled by visiting supporters to Mexican outfit Club Tijuana when they come face-to-snout with the club mascot. If there is a more frightening mascot in this world, the staff here has yet to find one that gives us the sweats like Xolo Mayor! Look at this thing! The only reason to wear a club scarf in the heat of Mexico is to protect your neck against this maniac’s fangs!

Little is known about this part-dog, part-bodybuilder, part-assassin and it’s probably best that way. There are rumours of a twisted veterinarian that wanted to create a dog that could LITERALLY beat all those cute pups at the Westminster Dog Show but it is merely the stuff of legend. Due to the lack of available details on Xolo Mayor, Mascot Hysteria sent a crew down to Tijuana on a fact-finding mission for this round. We send our condolences to their families and friends who are left behind.
Good doggy. We’ll just back away slowly and keep eye contact at all times.