What a load of fluff that was! The world’s finest point of plush pugilism has put another battle to bed and with that closes out the opening half-season – The Apertura for you fancy types – of the game you know and love – Mascot Hysteria. Not to fear though fans, your googly-eyed heroes will return later this year for “The Clausura” portion of the 2015 tournament and the eventual crowning of this year’s champion.

However, before the mascots head off for a little soft siesta we must take a look at the final battle of this round – and what a battle! In the closest vote we’ve seen, the reigning champion – Essex decapod/lad Sammy the Shrimp (representing Southend United) pipped the dog from the netherworld – Club Tijuana’s Xolo Mayor – by 1 percent of the vote! In a dual that left shrimp and blood hound (not bloodhound) battered, bruised and fluff-marked, Sammy’s experience grabbed him an aggregate vote tally of 50.5% to Xolo Mayor’s 49.5% and victory. 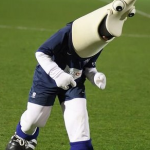 With that, Sammy the Shrimp now holds on to the title and will return in the first round of the next half of the Mascot Hysteria season later this year. Before we close out we of course want to pay tribute to this half of the year’s combatants… 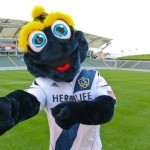 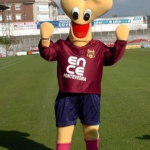 ROELIO (Pontevedra CF): One of the biggest vote-getters in the competition, the wacky Spanish bone was a tough competitor taking out Cozmo and Montrose FC’s Monty Mole with ease. Still looks suspiciously phallic.

SAMMY THE STAG (Mansfield Town FC): The always suspicious stag from the Nottinghamshire forests tore through Roelio and 1.FCN’s Ritter Frankie before his hatred of the Bee Gees made him take his googly eye off the ball. 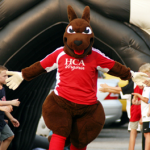 Mascots… Heads off for a well-deserved rest!