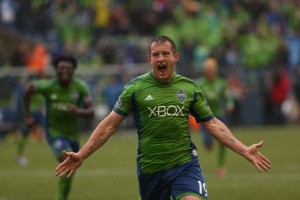 Lot of celebrating ahead of Chad this year.

Eh? what’s that? They’re not striking? Bloody hell, I should get on with this I guess shouldn’t I? Yes, with the 2015 MLS season officially starting on March 6th, it’s time to fire up the old season preview machine.

Mr Tony Walsh already got you started with this essential guide to the East and West teams, though he took the cowardly ‘alphabetical order’ way out and avoided making any kind of prediction, so i guess I’ll have to be the one to step up around here.  So what’s going to happen in the West this year, it’s strength improved as much by deleting Chivas USA as by adding Houston and the Sporks?

This isn’t the most detailed or well researched preview by any means, mainly based on my impressions from last season and whatever bits of off season news were big enough to stick in my brain, with that said here’s how the western Conference will shake down this year. Print this out and run to the bookies quick!

1. Seattle Sounders. Supporter’s Shield holders and I don’t really see any reason why they wouldn’t continue with that. Haven’t really done all that much in terms of squad improvement, but Deandre Yedlin aside, they did keep their important pieces from last year, Dempsey, Martins, Alonso, Chad’s Marshall and Barrett and should be able to keep going this year. What with the West having plenty of good teams, I think they’ll lose enough points to lose the Supporters Shield, but this might well be the year they finally figure out the playoffs and get the MLS Cup.

2. FC Dallas. Did well towards the end of last year, and with a full season of Oscar Pareja under their belt they should continue that. Dan Kennedy’s an upgrade over whoever they had before in goal, the defence should be solid again, in attack they’ve got Mauro Diaz, they’ll be hoping for fewer injuries there, Fabian Castillo, Blas Perez and Tesho Akindele, they’ll be hoping he can remember the one or two months he was good last year and do it for a full season. Oh yeah, they have Kyle Bekker as well, at least until he spontaneously combusts. He’ll help. They’ll lose to LA in the conference semi finals to leave a bit of a disappointing aftertaste.

3. LA Galaxy.  MLS Cup champs, but hey did you hear? Landon Donovan retired! I know, right? Why wouldn’t they have told us about that? We never had a chance to say goodbye. Anyway, they do still have a remarkably solid squad, Robbie Keane and Gyasi Zardes up front so they’ll be fine. Then to endure they don’t go a full season without having one of the world’s most objectionable footballers on their team, Steven Gerrard will show up in the summer. I predict he’ll be pretty crap as he adapts to the league after a full season and emotional goodbye with Liverpool, all Hollywood balls and me me me. He’ll also do something heroic to help LA win a couple of playoff rounds and thus get all the plaudits for his amazingness despite LA not actually winning anything. Classic Gerrard.

4. Vancouver Whitecaps. Vancouver were quite good last year, they just couldn’t score. The midfield should be as good as it was, and it’ll probably come down to whether new DP forward Octavia Rivero can replace the goals lost when Camilo abruptly upped and left. I’ll guess he does, to an extent and they’ll have their highest finish yet, 4th, finally getting a home playoff game in the wild card round. Which they’ll lose.

5. Real Salt Lake. This seems more like a lifetime acheivement kind of thing really, they’re on the way down and might well fall out of the playoffs this year, but I can’t quite bring myself to write that. Losing Borchers, Wingert, and Grabavoy is quite the blow to come back from, they did it a couple of years back when Olave, Johnson and Espindola left, but this might be a bit too much really. Speaking of lifetime acheivement awards, bringing back Jamison Olave doesn’t strike me as a good fix to the defensive losses. Joao Plata’s injured to start the year as well so I think they could well struggle. In the end there should still be enough of the old guard to see them sneak into the playoffs and beat Vancouver before losing in the conference semis.

6. Sporting Kansas City. A top team in the East for a while, now they get to see how they measure in against the West. Roger Espinoza’s a nice pick up, and hey they have Marcel de Jong, I’m very intrigued to see how he does. I can’t help but think that Peter Vermes might be very close to wearing out his welcome and I don’t see them as a real threat, but they should still have enough to scrape into the playoffs, at least the wild card, where they’ll lose in L.A.

7. Portland Timbers. Not good enough last year, and with Will Johnson and Diego Valeri out to start the season they’ll struggle. Nat Borchers beard will fit right in, but that won’t be enough to fully solidify the defence. You’d hope Darlington Nagbe can go back to being a scoring threat and a full season of Fanendo Adi should help, but it was never really the attack that was the problem. At some point in the season they’ll have a good run and almost ride that into the playoffs, and they might well sneak in ahead of RSL or SKC, but this is no time for waffling is it? They’ll miss out again.

8. Colorado Rapids. They were good last year, until they weren’t. There’s a bit of a DC United feel to their off season pickups, with Michael Harrington, Bobby Burling and Sam Cronin bringing the MLS experience. Argentinian Lucas Pittinari is the wild card here, they’ll need him to be good. Up front, they’ll need Gabriel Torres or Deshorn Brown to dramatically improve, I don’t think that’ll happen. No playoffs once again.

9. Houston Dynamo. Houston weren’t good enough to qualify in last year’s East, moving to the west really can’t help here as they finally move on past Dominic Kinnear. Owen Coyle is a very interesting pickup, as foreign managers haven’t really lit the league on fire have they (to be fair, a way too large percentage of them have been TFC managers so perhaps I’m being harsh). The midfield remains their strong point, the forwards remain the weakness, at least until Cubo Torres shows up, which won’t be soon enough. They’ll struggle.

10. San Jose Earthquakes. Sure they’ve got a new stadium, and hey Dominic Kinnear has a great track record but I just can’t see this happening for them this season. Wondolowski and Emeghara is a truly world class strike force in terms of names, but they’ll have to be phenomenal on the pitch as well as the scoresheet if San Jose are going to get anyhwhere near the playoffs. They won’t, and they won’t. I’d be very confident in this 10th pick if it wasn’t for the new stadium, that might help them get up to 8th or 9th.

There it is. After going through that, I’m less convinced by the ‘the West is so much better then the East’ narrative than I lazily was going in. They’ll still be better, but I don’t think they’ll be as obviously better as they were last season, but then that might simply be down to off season hype from the big Eastern media markets than actual reality. That’s why they play the games etc etc. Next up, your guaranteed correct guide to the East.