Posted By Duncan Fletcher on May 12, 2015 in News, Uncategorized | 0 comments 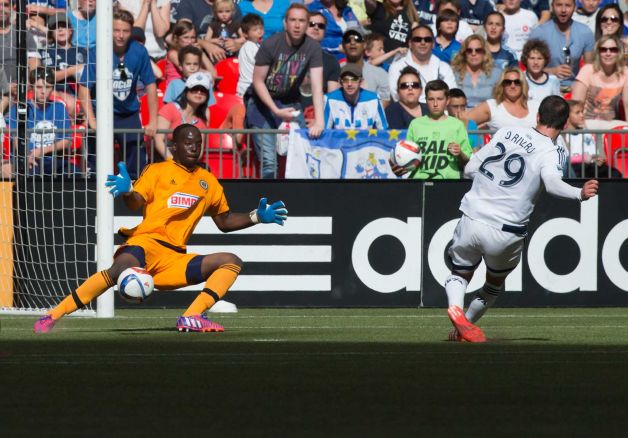 Hey it’s Brian Sylvestre. Probably best to not get attached to him, it’ll be someone else next week.

As always, if you want this without all these words and links and stuff, and with interruptions and all the quotes in a Yorkshire accent, the Vocal Minority Podcast is the place for you, this week’s episode should be up tonight before Wednesday’s game.

It’s astounding how people outside of Toronto aren’t paying attention to what’s going on in Toronto and wouldn’t you know it, even on this the grandest most revolutionary of weekends, they still all stole the show with big and/or entertaining games elsewhere. Those bastards.

I’ll start at the end of the week with the first ever instalment of the New York derby clasico soccerwars! as New York City held their noses and made the trip into Jersey to play the Red Bulls.  Some city fans got kicked off the path train for making too much noise, and there were the expected tifos, ‘20 years late and a stadium short’ all that sort of thing. On the pitch, it was pretty much all Red bulls, despite playing with ten men for most of the game. Bradley Wright Phillips got 2 goals and it ended 2-1. David Villa said they’re at rock bottom, Crushing and frustrating were other words used by city player, while Jason Kreis has been reduced to hoping that ‘At some point a bounce or two will go our way’.  The Red Bulls are feeling pretty good about things though, here’s Dax McCarty: “It felt like MLS Cup, to be honest. “The only time I’ve ever seen Red Bull Arena like that was maybe the Arsenal game.” Which is a hell of a depressing statement when you think about it.

“We tried to downplay the rivalry aspect of it, but whenever a team comes and brings 2,000 fans and they’re loud and you hear them, you always want to win and shut them up. You could feel it was a really big game and an important game

The best game was in Columbus as the Crew took down their old coach Sigi Schmid and Seattle 3-2 in a back and forth game highlighted by a couple of very good goals from Clint Dempsey and Federico Higuain.

Staying with teams at the top of the east, DC United got a 1-1 tie with the Sporks, their 7th game unbeaten, both goals coming in the span of a minute at the end of the first half.

New England meanwhile went up 2-0 on Orlando City on Friday night, surely an easy win? Nope. Cyle Larin and Aurelien Collin scored and orlando got a point.  Revs boss Jay Heaps went all Charles Dickens on this one “I thought it was some of our best stuff and some of our worst stuff, all in one.”

Adrian Heath meanwhile was very bullish post game  “I still think we can make the playoffs in this league. We have now shown on more than one occasion that we can play with the best of them.”

He’s probably right re the playoffs, as Orlando were the only team in the East’s bottom 6 to get a point as the race for 6th continues to reluctantly crawl along.

Montreal lost at home to Portland, just 13,000 on hand, but hey, Diego valeri scored his first goal of the season, curling one past Evan Bush from just inside the box, good news for the Timbers to have him scoring so soon and they ended up winning 2-1, Dominic Oduro also getting his 2st of the season for Montreal.

Philadelphia, after flirting with a possible return for Rais Mbohli, quickly shot down by the surely soon to be fired Jim Curtin,  had another new goalie in Brian Sylvestre, but put in another terrible performance, easily beaten 3-0 in Vancouver.

Chicago lost to RSL who switched from a 4-3-3 they’ve struggled with this year, not quite back to their old diamond plan, but to a 4-1-3-2. Chicago still don’t have even one tie this year, they’re 3-0 against eastern teams, 0-5 against the west. Frank Yallop saying about their season: “Topsy turvy, I’d use that phrase” “We tied a ton of games last year, I’d have taken a tie today for sure. It’s still in the making a little bit, we’ve not been dull, that’s for sure”.

In other games, San Jose took a lead into injury time in Colorado and came very close to losing, James Riley equalized and then later hit the bar with headers from corners. That’s now 8 ties this season for the Rapids, and 11 straight winless games at home, an MLS record. It all appears to be doing Pablo Mastroeni’s head in, saying the stadium needs an exorcism, then adding “I say cursed but I believe that we are the captains of our ships, the masters of our souls and I believe that we will find a way to navigate through this. But I don’t know when, and that is the mysterious part. We’ve endured a lot, but it’s going to come.”

Rapids captain Drew Moor’s a lot less fun: “I don’t think the stadium needs an exorcism. “We just need to be better on the field and start games better at home.”

Finally one of the biggest games in the West saw FC Dallas come from behind to beat the LA Galaxy 2-1, Mauro Diaz with a delightful play to scoop the ball over the defence for Blas Perez’ equalizer which is worth a look, before Tesho Akindele got the winner. Oscar pareja described Diaz’ last 15 minutes as ‘great and unbelievable’, before finally settling on ‘he was Mauro Diaz.’

Including a 0-0 midweek in sexy Sandy Utah, it’s now 12 straight away games without a win for the galaxy, and Bruce Arena’s getting all droopy dog on himself again ““When a team plays that poorly on the road, they’re not well-coached.”  We blew a lot of points this week….and that’s my responsibility. I have not done a good job with this team, to get them tactically right at the end of games.”

And that’s your MLS Wins and losses, in a week where the gap between teh good and bad teams in the east seems wider than ever.