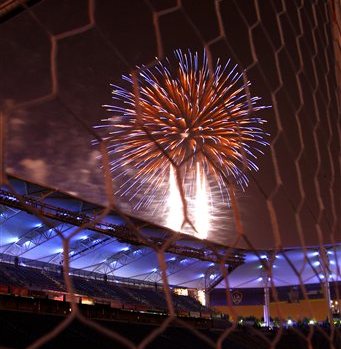 Hooray for terrorism, disrupting capitalism and overthrowing a legitimate government!!!!!

With some new big signings hogging the limelight, it was some of the already existing stars of MLS who made the difference this week, for better or worse, big goals, nasty tackles, they brought it all this week.

It started on Friday in Seattle as the Sounders took on DC with Supporters Shield implications very much a part of it. Seattle won 1-0 thanks to an 88th minute Tyrone Mears goal, but the big moment was when DC’s Fabian Espindola was sent off for an elbow to Zach Scott right in front of the linesman which might well lead to more than just a one game suspension. Stefan Frei also left this game at half time with a shoulder sprain, no news yet on how serious that might be.  Apparently the Sounders enjoy that Myers is English as Sigi Schmid had this to say about the goal: “I think he said he did it for the Queen, I am not sure.” while Chad Barrett added this: “I think I heard Andy (Rose) shout, ‘For England!’ right before he hit it. But it was perfect, you know. He hit it just as good as Steven Gerrard could have hit it”

Also on Friday, a game with 0 chance of Supporters Shield implications as Houston tied Chicago 1-1, which Will Bruin wasn’t particularly impressed with.  “When you’re up 1-0 at home and you give up a goal like that, that’s weak; end of story. “We’ve got to step up and basically just be men. That’s a terrible result at home. That has to be three points. There’s nothing else to say.”

Kei Kamara assisted on both goals by Ethan Finlay as Columbus beat New York 2-1 to move themselves to a very appropriate 6-6-6 record. More bad news for the Red Bulls after defender Chris Duvall broke his leg in a midweek US Open Cup game.

Stop me if you’ve heard this before, but NYCFC went to Canada, defended a lot, got outshot 25-5, got a lot of saves from Josh Saunders and 2 goals from David Villa, one a very nice free kick goal and left with a victory, this time beating l’Impact 2-1 despite only having 5 subs available due to injuries and international call-ups. That’s 4 wins out of 5 now and oh yeah, they officially signed Pirlo as well, practically a resurrection for Jason Kreis’ previously woeful side.  Frank Klopas called it “one of the best games we’ve played here at home, start to finish.” which is nice. Shame about the result though.

Mauro Diaz was the star, including scoring via the old Laurent Robert under the wall free kick routine, as FC Dallas hammered the tea terrorists 3-0. Jay Heaps was thrilled with his team’s performance. “Disappointed across the board. Every facet of the game. How we attacked, how we defended, free kicks, set pieces, we just weren’t good enough.”

Top of the West Vancouver went to bottom of the West Colorado, and lost 2-1. That’s the second time in 2 games this season the Rapids have beaten Vancouver, they only have one other win all season. For shame Whitecaps, for shame, you even let Kevin Doyle score, the DP striker finally getting his first goal as a Rapid. Still though 9 points from the 5 game road trip for the Whitecaps, not too shabby really.

Orlando took on Real Salt Lake and Kaka scored again, but then picked up his first ever straight red card, after trying and failing to wrestle Javier Morales to the ground and missing him with an attempted kick, he went back for more and shoved him to the ground, then stepped on his thigh as he ‘clumsily tried to step over him’. Expect the superstar treatment and the suspension kept to just the one game. Adrian Heath certainly seems to be trying to build a case.  “Ricky  said he tried to avoid him on the ground, yet the referee has interpreted it as he stood on him, but Ricky assures us he didn’t.  Ricky is just not that type of player, and it would be very strange for something like that to happen to him.”

Orlando held on with ten men throughout the second half to get a 1-1 tie out of it as RSL continue to steadily drop away from playoff contention in the west.

With the World Cup final happening, there was only 1 Sunday game this week, Portland versus San Jose and with two handballs in the box not called and two offside goals called back, one of which saw Gaston Fernandez pull his shirt off and throw it at (but fortunately not into) the crowd, the quakes almost got a tie out of it until Jack ‘Old salty Dog’ Jewsbury scored a legitimate, if scrappy goal after a free kick in the 91st minute.

And cue the radical terrorist uprising regime change day fireworks as that’s your MLS Wins and Losses for the week.