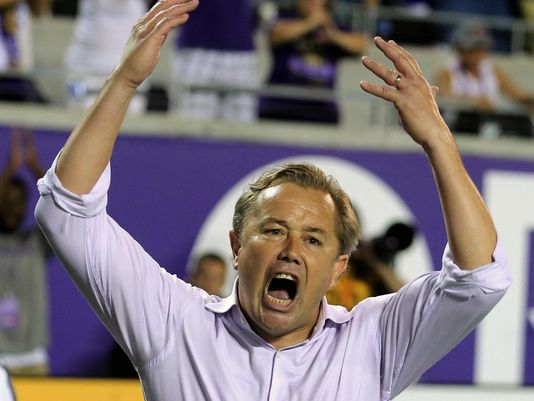 Adrian Heath. Happy as ever with the refs.

As always, this will be available in listening form later in the week as part of the Vocal Minority podcast

Steven Gerrard is here and he played and he scored a goal and squuuueeeeee! that’s all that counts this week, back to you Kristin.  I kid of course, but yes, the big thing this week was the official MLS debut of Steven bloody Gerrard, and for a while it went swimmingly, Quincy Amarikwa scoring twice to put the quakes up 2-0, but the Galaxy came back, Gerrard scored, Robbie Keane got a hattrick despite spending all day before the game puking, and it ended 5-2, the 3rd time in 4 home games the Galaxy have scored 5, apparently we all owe Greg Vanney an apology as the 4 goals he kept them to suddenly seems quite respectable.  Amarikwa did his best to steal the show back with his post game comedy stylings though, saying that he didn’t really celebrate the goals because: “Scoring goals, 1) it’s my job and 2) I want more of them, I want it to be business as usual.” Good luck with THAT Quincy.

Putting that unpleasantness aside, the big winners were the Columbus Crew who got 6 points from the week, beating Chicago twice, including their first away win of the season and moving to second in the east. Chicago are of course bottom of the East, and this was a strong week for Frank Yallop in this season’s sack race. Wednesday’s defeat brought plenty of doom and gloom: “It pisses me off when we don’t play well, it pisses me off we don’t have our players on the field too. You get judged on what you play like. It’s not always the true picture, but I can’t say anything, because it’s excuses.” He then proceeded to make a lot of excuses, Wednesday was all about injuries while Sunday’s defeat was down to a ‘phantom red card’ given to Jason Johnson, getting his second yellow for embellishment. Add in the fact that Didier Drogba apparently wants nothing to do with Chicago despite their discovery claim and it’s not been the best week for the Fire.

Cyle Larin’s very bad week continued as he got a very weak red card as Orlando lost 2-0 to New Jersey. Adrian Heath also got himself set off and then went off on the refs post game:  “I don’t really know what to say about the officials anymore. If I say something, I get fined, but if I say nothing, nothing changes. I think the referee has made so many wrong decisions—against both sides—that it’s hard to understand. “I am fed up coming in here and talking about the referees. We had 30,000 people come here tonight to see the players and see a good game. New York got a great goal to start with, yet here we are talking about the people who don’t really matter.”

New England finally snapped a 5 game losing streak, the tea terrorists getting a 1-0 win over New York City, still without Andrea Pirlo and Frank Lampard who didn’t make the trip to the Gillette stadium plastic. Meanwhile the Sporks keep on rolling, getting their 8th straight win at home against Montreal. Not a good week for the Impact who also saw Laurent Ciman’s wife accuse them of reneging on their deal to help with their autistic daughter’s care, and had to trade Bakary Soumare, somehow ending up with Kyle Bekker in the process. They do appear to be Drogba’s destination of choice though, so that’s something.

Stumbling at the top of the east are DC, who lost to FC Dallas 2-1, an injury time winner for Fabian Castillo, they’re now winless in 3, but they have picked up Alvaro Saborio who should work very nicely with Fabian Espindola up top.

They got Saborio from RSL, sending Luis Silva to Sandy, hopefully the Silva Plata connection will work better there than it did here. Plata got a goal as they beat Houston 2-0 after a players only meeting to address their season rapidly going down the toilet. Javier Morales thinks it’s done the trick. “I don’t want to talk too much about that meeting, but when people talk and say everything in the face, I think it helps a lot. I think right now we’re playing as a team. We’re fighting for each other. We’re working hard. You know that thing that always was around here, the team is the star, I think we’re back there right now.” Though they are up to 7th, they’re still 6 points back of Portland so let’s hope for their sake it continues. As for Houston, Cubo Torres is in town now so they’ll be hoping he can hit the ground running for them.

Seattle’s Dempseyless freefall continues, they’ve now lost 5 in 6 after going down 1-0 at home to Colorado on temporary grass laid over the turf for the sake of a Man Utd vs Club America friendly the day before. The Rapids meanwhile have won 3 straight, Pablo Mastroeni going backwards in the sack race and happy to see his plan come together: “You have to plant a seed and you have to water it. We’ve taken our lumps along the way, but we’ve learned from it. I think it’s a culmination of six months of hard work. Coming off of two good performances at home and coming to a place we haven’t won ever, the guys are starting to reap the benefits of the hard work over the course of the season. It’s great to see these guys getting rewarded.”

Finally, a Cascadia derby between Portland and Vancouver, this one ended 1-1, Vancouver’s goal was from Matias Laba, a 25 yard laser to the bottom corner after Portland just backed off him, apparently not fearing his shot “I looked forward and I had space. I shot the ball with confidence and it was nice to score. I love playing these games. The atmosphere is amazing. It’s similar to South America, too, so I like these games.” Bless him.  Happily the game ended with Will ‘too good for Canada’ Johnson getting himself sent off for dissent after the final whistle, which amuses me a lot.