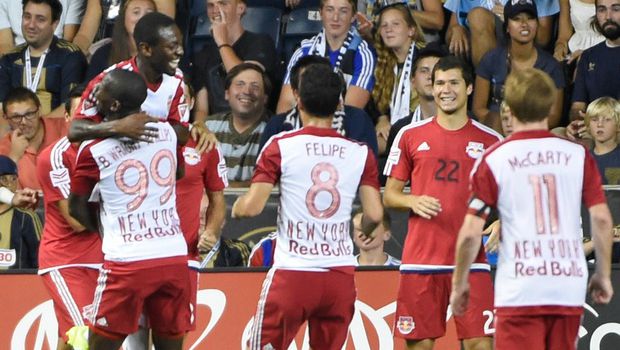 A picture to warm the heart of one Tony Walsh.

As always if you’ve got no time for this reading thing, you can hear this all as part of this week’s Vocal Minority Podcast, available soon in all fine podcast storing places.

Frank Lampard’s here and finally playing but no-one really cares so let’s move on and right into a massively entertaining and goal filled week in MLS. Saturday saw 39 goals, thus breaking the record for goals on a single day in MLS! which sounds kind of impressive until you realise expansion means there used to be a lot fewer games being played. Still though, 39 goals in one day, fun.

We’ll start with DC who went 2-0 down against RSL, but ended up winning 6-4. The first time ever in MLS a team has come back to win from 2 goals down in consecutive games, 10 goals, at least 4 of them spectacular, the highlights are well worth watching. Ben Olsen lost his voice, while Chris Rolfe, who scored DC’s first 2 goals said “That was the craziest game I’ve ever been a part of, in pro soccer.”

There were 7 goals in Orlando, the Lions winning 5-2 over the crew, Aurelien Collin scored for both sides, and Cyle Larin got two, bringing him to 11 for the season, thus tying the record for a rookie. Also in Orlando news, they unveiled the plans for their bigger than originally planned stadium, there’s a lot of purple, but sadly no rotating lion statue. Booo.

On to legendary Yankee stadium, and what happens when you have to play against Andrea Pirlo for 90 minutes?  You get a lot of time and space to be able to pick out accurate long balls over the top, Dominic Oduro and Ignacio Piatti having themselves a field day. Add in soft penalties for both sides and this one ended 3-2 to L’Impact, Frank Lampard’s looooooooong awaited debut as a substitute not making much of a difference really as this was the 4th straight home game giving up at least 3 goals for NYC.

At least one big signing delivered the goods this week, as Shawn Wright Phillips drew a penalty and also set up a goal for his brother Bradley, a partnership made all the more annoying by the fact Shawn wears number 98, obnoxiously complementing Bradley’s number 99. New Jersey beat Philly 3-1, their 3rd straight win to move back into second place in the East. It was a less impressive start for Philly’s new big signing, Swiss international Tranquillo Barnettta, who Jim Curtin actually, legitimately described to the press as ‘a quiet guy who’ll do his talking on the pitch’ as he came on as a sub and within a minute, did his talking by conceding the penalty that opened the scoring. After the match he said“Of course you hope you don’t start like this, I say sorry to the team, but we have to go and look forward to the next game.”

Curtin added “Poor Tranquillo, I put him in the game and within 30 seconds he’s on the wrong end of a tough call. There’s an element of feeling snake-bitten.”

There were also 4 goals in Colorado as the Galaxy came to town and actually won 3-1, their first away win since last August, also in Colorado, 17 games ago. Steven Gerrard talked about how the road record had been on his mind, Robbie Keane said it was a relief, Alan Gordon said it feels good, but Bruce Arena was the most delighted of all to finally get that win “It’s good but I would’ve survived either way”

Over to Cascadia for a derby as Vancouver went to Seattle who had Clint Dempsey back in the lineup, surely everything would be fine now. Not so much, the whitecaps won 3-0, Pa-madou Kah scoring twice including a cheeky backheeled flick. The two teams play each other again on Wednesday in CCL action, and Sigi Schmid is itching to get some revenge. “They went out and celebrated on our field a little bit and that pisses us off. We’ve got to make sure that we right that and we pay them back for that. I don’t think teams should come in here and be taking snapshots and pictures on our field. It pisses me off and I think it pisses off our players. When you play back-to-back and close together, that maybe heats up things.”

Finally on Saturday, Houston and the Sporks tied 1-1, Kansas very unhappy with the ref for a lot of things, including booking Dom Dwyer which means he’ll be suspended for the TFC game on Saturday, and not calling a 95th minute handball in the box. At the time he seemed to indicate he thought it came off Luis Garrido’s hip, but post game he explained that it wasn’t deliberate and that Garrido’s Caldwellesque flailing arm was in a natural position. It all left Peter Vermes a bit baffled “I was 60 yards away and I saw it clean. The referee was 10 yards away. I have no understanding of how you can’t make the call.”

Saturday’s excitement over, there were 2 games on Sunday, Portland and San Jose tied 0-0, Diego Valeri missing a penalty. Then the biggest mismatch of the week as top of the league FC Dallas took on the hapless bottom of the league Chicago Fire. The Fire won 2-0, Jeff Larentowicz returning from a 5 week injury layoff, and Shaun Maloney and David Accam with the goals, Ol’ Gil’s helping already.

In other news, MLS all stars of course beat Spurs 2-1, and there was plenty of new signings, Ghanaian internationalHarrison Afful to the Crew, Costa Rican international Johan Venegas heading to Montreal, Argentine Ezequiel Cirigliano do Dallas, La getting rid of Jaime Penedo and re-signing Donovan Ricketts and there were quite a few others. Also Didier Drogba and Giovanni Dos Santos arrived to mob scenes at the airport, all in all a very exciting week in the old M, L and S.