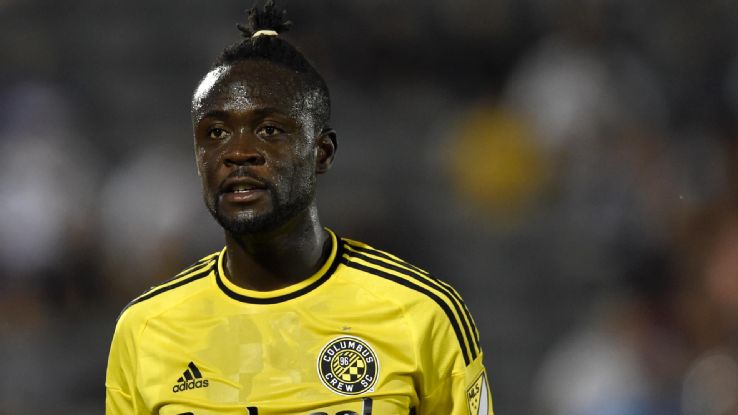 20 goals. Not bad at all. He’s ready. Terrible hair though.

As always, you can get the audio version of this in this week’s Vocal Minority Podcast, out later today.

We’ll start with the big losers of the week, which is happily Sporting Kansas City. The Sporks got a 0-0 tie in Portland only due to Tim Melia pulling off a bunch of saves, but then he had to miss the next game due to injury and then they lost 3-1 to Orlando!  Orlando! That was their first win in 7 games, their 2nd in 12 games. After looking like a good bet for the supporters shield, the Sporks now have just one point from their last 5 games and are now very much part of a 4 team dogfight for the last 3 playoff spots in the west. Adding to their woes was Dom Dwyer, having an emotional reunion with his old USL team, getting himself sent off. Peter Vermes thinks he knows the problem. “You can’t give up soft goals. Can’t give up soft goals. You cannot give up soft goals, because you can’t keep chasing games. And we’re giving up soft goals. That’s probably the simplest thing. You can’t give up soft goals.” He also knows who’s to blame. “It’s everyone. The first goal is a set piece, and everybody’s back, and you’ve got to mark your man, and what are you doing?”

Also in that dogfight are Portland who didn’t play on the weekend after that 0-0 midweek result, and then San Jose and Seattle, who met in what was probably the most important game of the weekend. The earthquakes took the lead through Fatai Alashe before Obafemi Martins equalised late on, leaving the Sounders in 4th with 42 from 29, ahead of the Sporks and Portland with 41 points, from 27 and 28 games respectively, and San Jose on 39 from 28.

There’s now very much separation from those 4 and the top 3. Vancouver are top after a midweek win over Colorado, whereas LA played against Montreal. Keane, Gerrard, Dos Santos, Drogba, Piatti, the Galaxy at home and Montreal without Laurent Ciman, surely a goalfest awaited. It ended 0-0, a very creditable defensive performance from the impact. Bruce Arena was unimpressed with his team, “Bad passing, inability to beat players one-on-one, bad crossing, not aggressive looking at the goal. Not a good performance in the attacking end of the field.” But happily he remains upbeat about the season as a whole.  “We’re 29 games into the season and we have probably the second or third most points in the league. I don’t think the roof is caving in on us. We’ll be okay.”

That dropped the Galaxy to 3rd, behind FC Dallas who easily handled NYCFC. Tesho Akindele scored a hell of a goal, hammering it from a narrow angle into the far top corner, eclipsing Michel’s ‘Olimpico’ direct from the corner, though probably one of the ugliest ones you’ll ever see, Josh Saunders won’t want to see replays of that. Lampard and Pirlo were both subbed off in the 66th minute, which allowed City to make a bit of a comeback, Patrick Mullins scoring in the 70th, but it ended 2-1, Dallas’ latest hot spell continuing with their 3rd straight win.

At the bottom of the west, it’s once again Colorado, who came close to beating DC, but gave up a late equaliser so got just the one point from 2 games this week. Real Salt Lake leapfrogged them with a 3-1 win over Houston who they’re now tied with on 35 points. That game’s only worth mentioning as it saw the first goal for their new summer signing Juan Manuel Martinez, and that’s only worth mentioning because his nickname is ‘Burrito’. Owen Coyle refuses to let his team off the hook for the disappointing performance.  “There’s no getting away from it: I thought we looked fragile tonight. We let ourselves down, and there’s no getting away from that. I felt offensively we created enough opportunities, but when all is said and done, we cannot defend in the manner we did. And that’s what happened tonight. It’s hard to take.”

Moving over to the East and things are very tight among the top 4 as DC were the only team to drop points. All of a sudden, after grinding out results without playing well all season, they’ve stopped doing that, this was their first point in their last 4 games, though Fabian Espindola is back so that should help them get going again.

Top place now belongs to the Red Bulls who came back from 2-0 down against the Fire to win 3-2. They’ve got 45 points from 26 games, DC are now below them, with 45 from 29, only just ahead of Columbus who now have 44 from 29 after beating Philly 2-1 thanks to 2 goals from Kei Kamara, now at 20 for the season, who delighted in shushing the philly fans after each goal, I’m guessing they’d been giving him stick about his new hair. New England are in 4th with 43 points, then there’s TFC all the way back, then Montreal all the way behind them in 6th after their point in LA.

Orlando’s win we talked about earlier means they’re tied on points with Montreal on 32, though having played 4 more games, Brek Shea made his return for them after missing almost all of their recent terrible run, Adrian Heath is certainly happy to have him back: “It is just good to have him back. He can win things in the air, he can run behind people, he can create things. He is more responsible in his defensive duties. You saw the reception he got from the crowd. We will be a better team having him fit and well.”

Behind them Philly, New York City and Chicago all lost as discussed before and slide further into irrelevance.