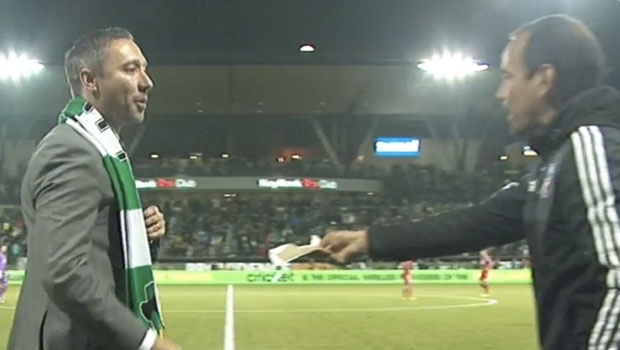 Things are picking up ladies and gentlemen as despite a few low scoring games, this was another one of those MLS weeks that had a little bit of everything, some entertaining games, streaks approaching historic status, predictable meltdowns, continued heartbreak, a coach spat and much much more.

It’s only right to start wins and losses with the biggest non winners of all, the Colorado Rapids as they take a serious run at the record books. They broke 2 streaks in this one, sadly for them it was their 0 goals conceded streak and their undefeated streak as they lost 2-0 to the New England Tea Terrorists in comely Commerce City. That nil was their 4th straight to start the season and going back to last year they now have a 600 minute goalless streak going, only 2 1/2 games away from 2007 TFC’s all time MLS record. This was a pretty remarkable one as especially in the second half they dominated New England, outshooting them 17-9 all together, hitting the post 3 times and having a penalty awarded then taken away for an offside that happened after the penalty. Remarkable stuff. That makes it 18 straight going back to last season, tied for the all time record with Real Salt lake of 2004/2005. Don’t tell Sam Cronin that though, “No, we’ve been winless in four games,” he said after the game. “Last season makes no difference whatsoever to all the new players. I’ve been around some teams with some difficult spells like this and you’ve got to talk your way through it and be proud.” His TFC experience being put to good use, that’s nice.  Coach Pablo Mastroeni, who was sent off for arguing the almost penalty is a little more ready to wallow in some self pity. “For the third consecutive week, the opposing team’s goalkeeper will probably have the save of the week and it just seems as if our goal is covered with some kind of saran wrap,” He said. They go for the record this Friday in Dallas, I think they’ll get it.

Talking of FC Dallas, they finally lost their first game, 3-1 in Portland, their first win. The big interest here though was from the coach’s immediately after the final whistle. Oscar Pareja obviously thinks Caleb Porter whines too much to the refs, and mimed wiping his eyes with a tissue that he then offered to Porter in lieu of the customary handshake. Porter took it and threw it back over Pareja’s head while telling him to look at the scoreboard as he walked off, Pareja half heartedly looking like he wanted to chase him, his assistants dutifully stepping in to pretend restrain him so he didn’t have to and could instead do the old Scrappy Doo lemme at him routine. All sorts of fun. Porter said he’d never been disrespected like that by another coach, and Pareja later said to Alexi Lalas that it was a message to all MLS coaches, himself included that they should stop crying to the refs on every play.

That loss means Vancouver are now the big winners, sitting top of the league after beating LA Galaxy 2-0, forcing Bruce Arena to emulate his droopy dog looks with his post game comments: “We have no excuses. We were soundly beat over 90 minutes. They out-competed us from the start.” he said, also adding “We got beat in every aspect of the game. There’s no area we can feel good about.”

The western conference old guard struck back somewhat with RSL beating San Jose 1-0 on a fabulous Javier Morales goal and Seattle beating Houston 1-0 in fairly unremarkable games. Meanwhile in the East the status quo was again enforced with another 1-0 result, as DC united for the second straight got a somewhat undeserved injury time winner, against Orlando, injury time losers in 2 straight home games now. They also lost forward Pedro Ribeiro, also known as the only guy not Kaka who’s looked like scoring for them this season, which will hurt but should at least give Cyle Larin a chance to get some games in.

Probably the most entertaining game of the week was Toronto in Chicago but it ended with another 3-2 game, entertaining more for the sloppiness and late drama than any quality on display. Despite only attempting 212 passes all game and only connecting on 53% of them, lovable losers Philadelphia Union were about to get their first win of the season, in Sporting Park no less, leading 2-1 as the game neared it’s end, thanks partially to a Jacob Peterson own goal. They then comically messed up a breakaway chance via a mixture of deathly slowness from Fernando Aristeguieta, bad luck when Sebastian Le Toux hit the post and a horrible shot on the rebound from Michael Lahoud. Then the refs announced 6 minutes of injury time. That was more than enough as the Sporks scored twice from in close amid shoddy set piece defending and goalkeeping, Rais Mbohli once again not earning his DP paycheque. Philly now sit bottom of the league with just 2 points, a -4 goal difference and more goals conceded than even TFC, though having played one more game.

And that would be your MLS wins and losses for the week.