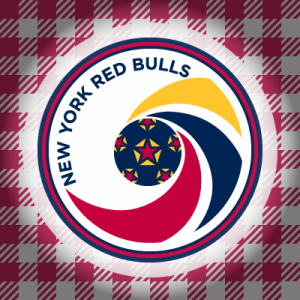 Welcome to the annual #VMPissUp as we are #DrinkingWithKristin in an unnamed pub somewhere in hot and humid Toronto.  Joined by such luminaries as @grawsee, @bigwulliestyle and @redwineroz for this event, the drinks were cold and the football was lacklustre… unless you were pulling for the opposition, in which case, it was glorious.  Celebrating VMP host and writer Kristin’s birthday, it was educational as well as entertaining and capped off with the bar turning on Ghostbusters on the big projector.  Well done.

23’ – YELLOW – Bradley gets booked for a late challenge on Filipe

26’ – GOAL – Grella dances around Williams and lays it off into Bradley Wright-Phillips who pops it over Bendik.  Kantari was pulled off of his mark and was punished for doing so.
ENERGY DRINKS 1, ROBINS 0

33’ – Toronto struggle to get the ball out of their own third.  Harrison is all over Toronto defenders, causing mistake after mistake.

37’ – YELLOW – Altidore gets booked for a silly challenge.  That’s two DPs in the book.

42’ – Kantari gets his head on a long cross into the box and comes so close to scoring.

Half Time Mood : Time for another drink.

45’ – Let’s start the half off with BWP getting through for an attempt on goal.

55’ – Giovinco is down grabbing his bottom.  No booking.

58’ – Kantari with a quality tackle on BWP to get the ball from him, then takes the ball up and gets hacked down by Sam.

73’ – Whenever Vic Rauter says Herculez, it feels like he’s calling forth a hero to save us from Daedelus.

77’ – Giovinco free kick fools everyone in the pub (who’s watching) and goes with a short pass instead of blasting it into a wall.  Then gets fouled.

78’ – Giovinco free kick blasts it into a wall.

87’ – Williams with an excellent tackle on the edge of the box and clears it.  I guess getting a broken player was worth it.

90+1’ – Shawn Wright-Phillips gets on the end of a half volley and fires it, but Bendik comes up with a great save.  Then the camera cuts to this… 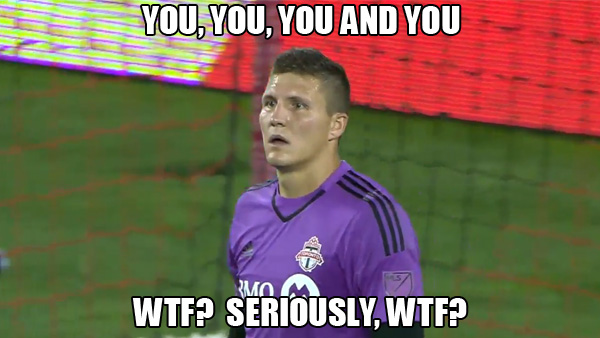 90+3’ – GOAL – This starts from a blown pass from Bradley, counter attack finds BWP one-on-one with Bendik, and Bendik comes up big, but the rebound was picked up by Veron who buries it.
ENERGY DRINKS 3, ROBINS 0

Man of the Match : Bendik

Goat of the Game : where do you start… defence was poor, midfield was mediocre

Ref Rating : 4 out of 5.  I’m sure Toledo will get a fine for this performance.

In Case You PVR’d It… : you wasted hard drive space.  Delete it… but if you managed to record the KC v. Vancouver, you’re gonna want to watch the whole thing

I Am Not The Gaffer But… : I might question where it all went wrong

Though the company was well worth it, the game was a bit of a sham and the scoreline reflected it.  The possession stats were 70-30 for New York.  Toronto had no more than a handful of meaningful shots, and Robles had to make about two stops.  New York had the shut down in full on Giovinco, as his chances were few and far between, but there seemed to be white shirts everywhere.  Part of me wants to give high marks to Bradley Wright-Phillips, but he was made to look better in the face of a mediocre defense.  New York pretty much owned Toronto in every conceivable way, which made it tough to watch.  If they only tried to play five at the back…

Making my feelings towards Sporting Kansas City and Vancouver no secret (hatred and mostly indifference, respectively), now THAT was a game.  Outstanding outcome.  Even if you don’t know, just go read the scoreline and be whisked away to a far away land of goals and heartbreak… Kantari had two modes in this game, one where he was on point, confident and accurate in his motions, and the other being a new born foal not sure what to do… Though he probably could’ve had done a bit better on the second goal, Bendik did well again, all things considered… Drinking and urban dictionary are a delightful combination… I was pleasantly surprised with William’s debut.  Wasn’t expecting much, but he seemed competent and did well in his job for most of the night from what I saw.  Still have some gaping holes in the back, but an improvement, none the less.