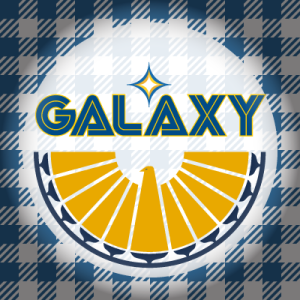 LA Galaxy are weak. Toronto is the toast of the league.

Like you could’ve predicted a reality where this could have happened.

Toronto is missing Seba and Jozy due to precaution. More like an awesome precaution, am I right?

Vazquez as a forward. Ok. Sure. Why the fuck not.

5’ – I demand that any reference to Bradford Jamieson MUST INCLUDE “the fourth” when said by the play by play team. Anything less is disrespectful, and denies me amusement.

18’ – Vazquez takes a shot from 20 yards forcing a save from Kempen.

24’ – GOAL – What was that?!? Ok, Vazquez sneakily takes a free kick and hits the upright, but Moor goes head-first to torpedo the rebound past the surprised Kempen. Fabulous.
SPACE CADETS 0, ROBINS 1

27’ – THE FOURTH! BOTH OF YOU! SAY BRADFORD JAMIESON THE FOURTH! Anyways, he was booked for a flailing arm into the face of Delgado. (Damn you Mr. Wileman and Mr. Caldwell)

37’ – GOAL– Hasler lays a ball off to the right, and Ricketts gets to the end of it and slides it past Kempen. Go on son.
SPACE CADETS 0, ROBINS 2

44’ – Oh my lawd… Hasler, Vazquez, Delgado then a wonderful cut to Osorio who’s one touch is stopped cold by Kempen. What a save.

Halftime Mood : ladies and gentlemen, this is Toronto muthafuckin FC. Standing ovation from the couch.

53’ – Ricketts chases down a blown pass, gets it to Vazquez and the pass was looking for an open Osorio, Kempen well off his line, but the pass was played too hard and out of Oso’s reach.

58” – Cashley Cole plays a nice ball to Gio Two Saints and his chip beats both Bono and the net.

60’ – Ricketts was offside, but a beautiful string of passes from Bradley to Hasler and crossed to Ricketts. So pretty and so offside.

69’ – Jack McInerney comes on for Bradford Jamieson the fourth.

72’ – Woah. Just noticed the massive difference between Mavinga and Hernandez. He just stood there as his marker took off towards goal. Bradley cleaned it up. I mean, I’ve always known but now I’ve witnessed it without question. 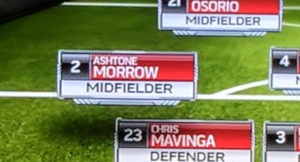 Screenshot of TSN starting line-up graphic. Only caught it because too lazy to check twitter.

76’ – GOAL– Oso to Vazquez, plays it back to Ricketts, buries it and gets tackled from behind.
SPACE CADETS 0, ROBINS 3

78’ – GOAL – The greatest club the league has ever seen. Bono boots it, takes a bounce, Vazquez runs onto it and slides it home. LA are a dumpster fire.
SPACE CADETS 0, ROBINS 4

87’ – Ricketts should’ve notched his hat trick, but fires at the keeper and out for a corner.

89’ – Cooper takes a short pass from Osorio and fires just wide of the post.

Man of the Match : I gotta pick one?!? Vazquez.

Goat of the Game : hahahaha, the LA Galaxy.

In Case You PVR’d It : so much goodness. Watch it again.

Does anyone else get that less-than-impressed feeling when Cooper comes on the pitch? Given how dynamic everyone is playing, I feel like he isn’t at their level, square balls, square runs.  It could have also been the desire for them to keep a clean sheet and my previous feelings towards him made me uneasy.

Did LA seem like they wanted to play moreso than San Jose did last week? Both were equally poor, LA likely worse, but LA at least were trying to move, they just failed at it, whereas San Jose couldn’t even will themselves to string three passes together.

How many of you thought, even if it were a split second, that maybe we don’t need Altidore or Giovinco or both? I did have the fleeting thought shortly after the third goal, but then I was reminded that LA is terrible by the fourth goal and, well, this performance could be a bit of an anomaly, them on the downward trajectory, Toronto on the ascendancy.

And, no, we need them.  There’s trophies to win (lookin at you CONCACAF Champions League).

How many of you still think the wheels will fall off of this ride?  Super guilty.  I figured that this would be the game where the streak would end as there were many factors at play : two DPs out, west coast/jet lag, LA is due to come out of their slide.  The realist in me believes that this team will win MLS Cup without question.  The optimist believes they will win Champions League (the real one, not that bullshit European one (#jokes)).  The pessimist… you know what, fuck that pessmist guy. We need to enjoy the ride.