Home » Malarkey » THE STARTING 11: Other Things Giovinco May Have been Doing During His Goal Celebration

THE STARTING 11: Other Things Giovinco May Have been Doing During His Goal Celebration 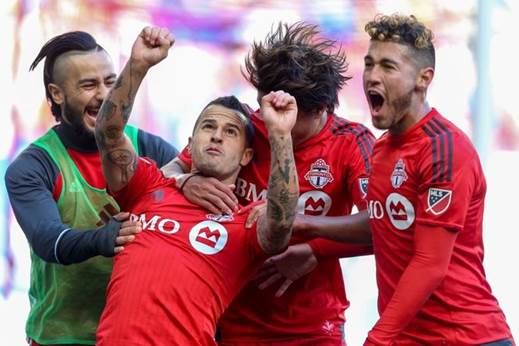 Wheeeeeeeeeee! You can only assume this was the noise Sebastian Giovinco was making in his “little mouse” voice as he celebrated the opening goal vs. Red Bulls last week. And who could blame him? The wee Italian not only opened TFC’s 2016 account but continued where he left off from his record-breaking 2015 season. His wild “riding an out of control Vespa” celebration was the cause of much amusement amongst The Reds’ faithful but while it is assumed he was hopping on an Italian scooter, could there be other explanations?

11. Vaulting completely clear over his current contract into a more lucrative one

9. An illustration of his difficulties climbing onto adult-size chairs

8. Riding the untamed bull that is suddenly raised TFC expectations

7. Piggy-backing an Argos running back in for a BMO Field touchdown!

6. Holding onto Bitchy the Hawk’s reigns as the two of them comb Toronto’s skies vapourizing every seagull in their path

4. Taking flight so that Greg Vanney can grab onto his coattails

3. An elaborate homage to his favourite film “The Neverending Story”

2. Riding his Miniature Shetland Pony “L’il Sebastian” into the sunset

1. Grasping the handles of his post-Euros jet ski that takes him back across the Atlantic