Posted By Kristin Knowles on Jan 7, 2015 in News, Uncategorized | 6 comments 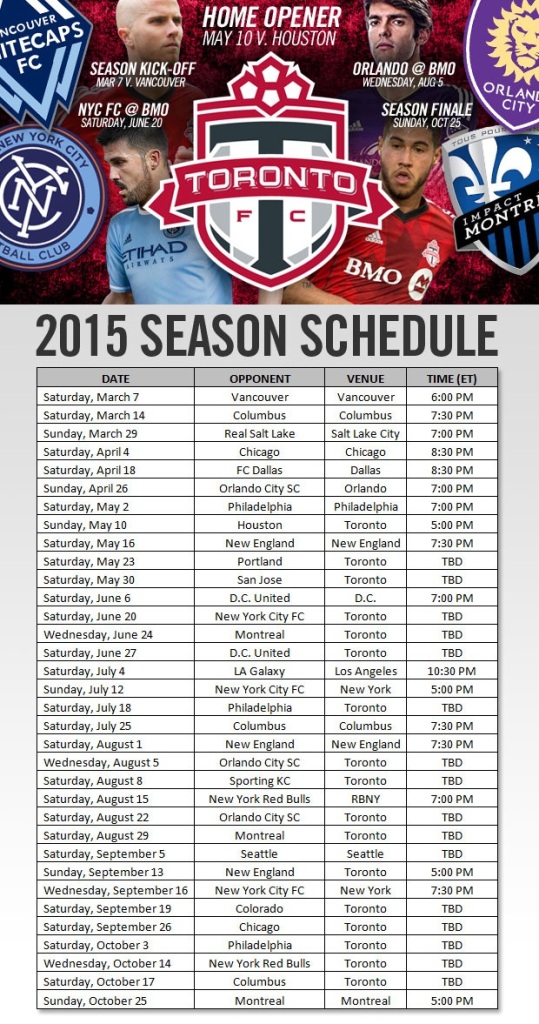 No freezing at the home opener this year? Whee!

A late season road trip to Montreal to end the season, Orlando City FC twice in August and playing New York City FC three times (only game in TO is pre Fat Frank though – sorry Chelsea City fans/not sorry), this season and kicking it off at home on Mother’s Day  – yes  the 2015 Toronto FC schedule has finally been released.

Well that feels better doesn’t it?  It never really feels like the season is going to happen until we see the schedule.  And as MLS likes to keep us waiting later and later each year we’ve been getting kind of antsy about the whole thing.  This year Toronto start the season with 7 games on the road due to the construction at BMO Field.  Positive of that is not freezing our asses off for the home opener this year; negative is TFC on the road for SEVEN games.  That will likely end in tears but more on that when it happens.  As usual we’ve little to no idea what time Toronto’s home games start because our television overlords haven’t told us when the team is allowed to play as of yet.

However as happened last year TFC have their bye weeks early and get a jam-packed schedule towards the end of the season – six games in August alone, including two during the Ex….ugh.  And no long weekend games for us this season either – boo.   But what is more important about the lack of scheduling balance is that Toronto play ten of their last fourteen games at home and five straight to end the season until jaunting off to Montreal for the final game of the year.   Depending on how our Reds are faring, a protracted home stand to end the season should be a good thing.  Yes it’s fifteen games in 11 weeks but there’s limited travel in those weeks as the only game that sees them leaving the east coast is the match against Seattle on September 5th.  Being able to stay close to home and get into a rhythm with training, travel and schedules is better than having to wing all over the place – I’ll take a couple extra games over having to criss cross the continent.

A couple of odds and ends with the schedule though – facing Western Conference opponents is supposed to alternate each year but we are seeing the same thing as last year – away to LA (sorry Steve G fans/not sorry), away to Seattle, RSL, etc and home to Portland, Houston, San Jose and so forth.  Although just the one meeting (the home opener) against Houston this year as they moved conferences for the upcoming season. Presumably this has to do with the addition of the new teams and balancing the schedule but seems odd that they couldn’t flip which directions the teams travelled for those games.  We only face Sporting KC the one time, go up against DC United twice in June and only see the Fire twice as well.  The schedule will be truly balanced some day, right?  However in a positive change the final weekend of the season will actually be the final day of the season with all of the teams playing  at the same time – 5pm ET for the Eastern Conference and 7pm ET for the Western Conference.  How logical!

One last note – for Toronto based Voyageurs that are planning the month of June around the Women’s World Cup, well you’ve got some decisions to make.  Although the weekend for the final is free and clear, plus their are chances to fit in games somewhat nearby without missing too many home games it will require some fancy footwork.  I have faith in all of you to fill the stands for both.  And now it’s time to start booking days off, telling your friends and family when you won’t be available for non-footy related events and again, luxuriate in knowing it won’t snow at the home opener this year.  Silver linings are important folks.  See you in May!