Home » News » Toronto FC 2018 Schedule Released: What Have The MLS Scheduling Gods Come Up With This Year?

Toronto FC 2018 Schedule Released: What Have The MLS Scheduling Gods Come Up With This Year?

Posted By Duncan Fletcher on Jan 4, 2018 in News, Uncategorized | 0 comments 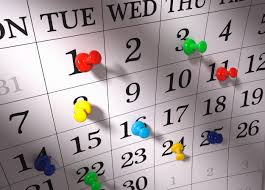 Thankfully the schedule’s not quite this busy. This isn’t baseball dammit.

Start booking those days off and planning those road trips – the 2018 MLS Schedule is here!  We already knew that Toronto FC kick their year off with two Concacaf Champions League games against the (*YAWN*) Colorado Rapids in February, and that the home opener is against the Columbus Crew on March 3rd, and then after a bye week we go to Montreal for le jour de Saint Patrice Bernier (Baissez-moi, je suis irlandais!), now we get all the other details.

Here’s the schedule. Before we get into the details, a complaint that good god this feels early. This whole playing right to the end of the season thing means you just never get a break, the Superdraft’s almost here and now the schedule’s out? I’m not ready for all this yet.

So what have we got? Well if you prefer not to freeze or burn, it’s not too shabby after the opener. There’s only one other game in March and though the season finale and eastern conference final preview against Atlanta is October 28th, there’s only one other October game so very few games that should be too cold. Same for the summer really, with a world cup break in there, there are 0 home games in June, 2 in July and 2 in August, not too excessive at all.  And hey, one of those July games is Canada day, been a while since that happened. 5 games between April 28th and May 25th, then 4 from September 1st (hey another long weekend home game!) to October 6th mean over half the schedule should be very pleasant. But maybe you prefer lots of summer games, in which case I guess you’d better hope for a hot September.

TSN’s Friday match night thing seems to still be a thing in the barren CFL-less months of the early season, 4 of the first 8 home games are on Friday nights, to which I ( should point out most of this was actually written by Duncan but he’s damned if he knows how to change the authors*) say fuck off TSN, nobody likes this!

What else have we got for home games, well we get to see the new glamour boys of LAFC this year, that’s nice. That game that didn’t exist on last year’s schedule appears to have taken the place of the 3rd game against Columbus meaning the Trillium Cup is a 2 game series this year, and the March game will be the last home game against Columbus before they go off to be Austin Celtic.  The 2 teams we get to play 3 times this year are the Impact again twice in Montreal, and then the Tire Fire, including a back to back on the 21st and 28th of July.

As for road trips, there’s no obvious combination of games close together to build a week around, but there’s all the usual options for a one off, Montreal away for the penultimate game of the season October 21st as well as the St Patrick’s day game.  Visit DC’s new stadium in October or take a first trip to Minnesota for July 4th. Whatever you fancy really.