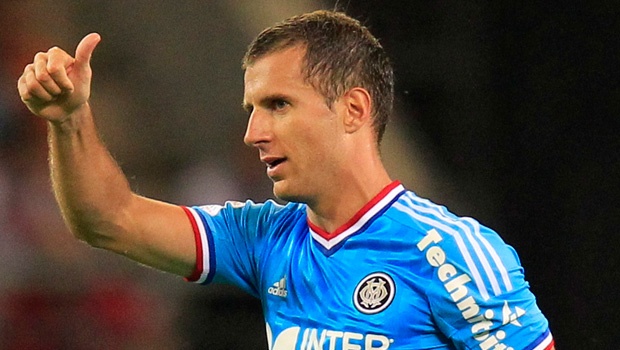 Right back at you, you magical bastard.

So, that’s the final pre season game in the bag, and with a win, 2 goals and 5th place sewn up.  Those things are all in one way or another results, probably the most meaningless bits of info we can get from pre season, but there were definitely some things worth reporting on here as far as the general shape tactics and overall look of the team are concerned.

The obvious thing to mention would be win schmin, given this was against an under 23 team, it still didn’t look all that impressive. There was way too much of the time, especially after Benoit Cheyrou went off injured that there was precious little chemistry on display, the whole thing just a bit too slow to be reallly dangerous.  Having said that, no team should aim to be peaking in March and there were definitely more positive moments than in other games we’ve seen so far.

It’s horribly obvious to pick out the goals as the positives, but both of them had a lot of good things to them, that are clearly tactical decisions worked on in training, part of the plan and likely to be seen again in the future.  We’ll start with the first goal.

One of the things Vanney is obviously trying to implement is to have the full backs high up the pitch and for the team as a whole to aggressively press the ball as a team when the opportunity presents itself, and this terrible pass out to the right back by the goalie is an opportunity presented on a platter. Altidore pressures him into a low percentage pass, Benoit Cheyrou and Damien Perquis harass the next player and force the turnover which Justin Morrow quickly passes to Cheyrou. All that happened inside the Costa Rica half of the pitch, textbook forcing of a turnover in a dangerous position.  The next 10 seconds or so are absolutely magical as Cheyrou, seemingly pinned on the touchline by 3 players, instead torments them, including nutmegging one and causing two of them to run into each other.  The cross into the box reaches Robbie Findley who manages to chest it down to Sebastian Giovinco, hanging back between the lines of defence which is something that was specifically mentioned going into this game and he hit a very nice shot into the goal. Lovely. I also enjoy that Steven Caldwell knows who the star of that goal is, running off to celebrate with Cheyrou first while everyone else goes to Giovinco.

The second goal is more about patient passing around, but again features a couple of things that will warm Greg Vanney’s heart. Jozy Altidore effectively starting (after the initial long ball is won by the Costa Rican’s then won back by Giovinco) and finishing the move from his position out on the left hand side, and Warren Creavalle receiving the ball well inside the opposition half and cutting in quickly from the wing to take a couple of the Costa Rican defenders out of the equation and put Los Ticos into unorganised reactive chasing the ball mode. Then it’s a nice pass from Bradley, a one two between Giovinco and Osorio, some lovely dribbling from Giovinco and a very nice finish from Altidore, coming in from a lot of space out left. The tactics and the chequebook coming together very nicely in that one.

So yeah, a couple of nice moments there that really show what it is the club’s trying to do, in moves starting with and without the ball. Such moments have been rare this post season, hopefully familiarity can help with that.  Also, hopefully Benoit Cheyrou isn’t injured, he was subbed off after 35 minutes, replaced by Collen Warner, I don’t think it’s coincidence that TFC looked better before that happened. Justin Morrow also left the game with an injury that was a result of one of a few tackles that were much harder than they need to be in what turned into a quite feisty game,  that would be a massive blow if he has to miss any significant amount of time.

The other thing to notice today were the positional tweaks put in place, with the formation often resembling a 3-4-3 when TFC had the ball. Ahead of Joe Bendik, Damein Perquis and Steven Caldwell were very wide, with Michael Bradley very deep ahead and sometimes behind them in the middle.

Benoit Cheyrou was on the left hand side of midfield, further up than Bradley, but not as far up as Justin Morrow who was practically playing as a left winger, with Jozy Altidore also much further out to the left than he had been in previous games, allowed to roam a lot out at the edge of the box.

On the right, Robbie Findley was the wide man playing more as a traditional winger, with Warren Creavalle not as far advanced as Morrow, in more of a midfield role, ready to challenge the Costa Ricans when they had the ball and often cutting inside when he had possession.

That left Jonathan Osorio and Sebastian Giovinco in the middle, Giovinco the further ahead of the two more of a false nine than a straight up number ten, and both goals saw him take advantage of the defensive confusion that caused.

Obviously there was plenty of movement within all this, and obviously this is based on one low tech feed with none of your hear maps and all that nonsense, but here’s more or less what TFC seemed like when they had the ball. It definitely looked better than in previous games, maybe that’s due to the opposition, who knows, but both Altidore and Giovinco were more involved and effective and it’s always a good idea within reason to figure out a way to get the best out of your best players and if TFC are going to do anything this season, then those two will have to be heavily involved.

The downside of this formation, mainly the marauding full backs part is how exposed it will leave Toronto on the counter attack, which is something we saw a lot of last season after Vanney first took over. Presuming CBA things go nicely and TFC do indeed play next week, Vancouver couldn’t be a worse opponent in that respect given how speedy forwards like Darren Mattocks, Kekuta Manneh or Erik Hurtado are to their attack.

Obviously, exactly how it will work out when the games mean something and the intensity is ratcheted up is still an unknown, but it’s good with limited evidence to see some changes being made and some success coming from them. The main information from today though will be any injury updates on Morrow and Cheyrou.