Posted By Duncan Fletcher on Jan 26, 2015 in News, Uncategorized | 0 comments 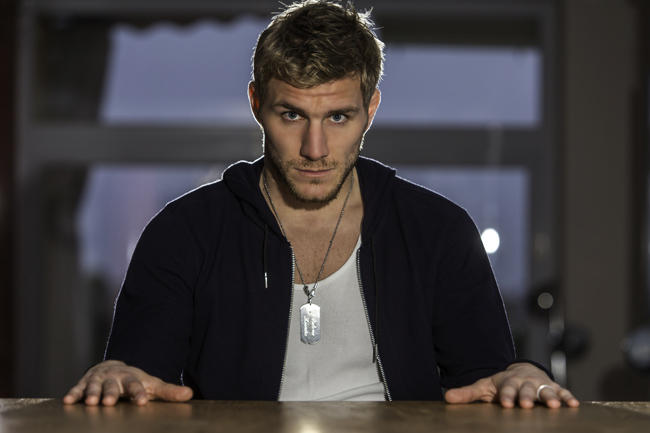 ‘French polish?’ ‘No, not at all, why are you asking that? Oh you mean ON the table, yes, yes it is’

We have another new player in through the revolving door, as this morning the signing of Damien Perquis was announced by Toronto FC. Unlike Jozy Altidore or Giovinco, there was no great ceremony to this one, merely a press release, an article on the website and a photo of him holding up the shirt (number 24, and he clearly has a lot to learn as he appears to be smiling.)

Despite the lack of fanfare, hype and exorbitant salary, this might well be the most important of the off season signings so far in terms of what’s important, performance on the pitch and results of the team as a whole.  The defence was clearly where there was a lack of numbers and reliable MLS quality last season; and really there still is. Steven Caldwell showed his worth last season, mainly in how the team looked unorganised without him, but even forgetting the arm flailing thing, he’s getting on, can he be relied upon to continue at that level for a full season? Nick Hagglund didn’t really look comfortable after Greg Vanney took over last year and relying on draft picks to provide the depth is very much a gamble. Perquis’ ‘pedigree’, for want of a better word, and experience should be a great help.

Salary details obviously weren’t released, but you’ve got to think it’ll be a fairly high amount, close to the maximum non DP amount (whatever that might be when the new CBA’s done), which means TFC will have a lot of money wrapped up in the 5 man core of the team. Quality depth has certainly been an issue for TFC in the past, hopefully Tim Bezbatchenko can live up to his cap wonk title and make the remaining cap space stretch to surround them with enough quality.

There’s obviously doubts to be had, not least the fact that he and Caldwell will certainly be one of the oldest and least mobile central defending partnerships in the league. That doesn’t bode well if Vanney’s planning to continue with the idea of pressing high up the pitch, last season that initially led to a lot of space behind the defence for potential breakaways, then the defence seemed to start hanging back a bit to offset that which messed the whole thing up even more. Hopefully an entire off season to work on that and the extra central midfielder the 4-3-3 might bring will make their lack of speed less of an issue and let their assets of experience and football smarts shine.

Despite those misgivings, I’m fairly confident this will work out, though I see his value coming more as an eventual replacement for Caldwell, marshalling things alongside Hagglund, or Skylar Thomas or some other younger player.

I didn’t know much about Perquis when I wrote about him when his name was first linked to TFC, and there’s not a whole lot I’ve learned since, but we here at Vocal Minority Towers can’t let that sort of unprofessionalism slide, so let’s see what we can learn about him? You can easily find his career stats elsewhere, so lets see if there’s any clues in his background as a French Polish player – what type of player are they? To wikipedia, (slightly adapted for our purposes and with my added thoughts in the brackets)

The French Polish player is considered by many to be a beautiful way to finish a team (good start, I’m all about results but beauty’s also a good thing), but it is also recognised to be fragile (hmm, less encouraging, I guess that’s why he’s missed so much time recently with injuries). It is softer than modern players (hmm, not sure MLS is the right league for him) and is particularly sensitive to spills of water (bloody hell, he’s the reverse wet wiedeman?)or alcohol (uh-oh I guess a prime candidate for our next Club Escobar-esque fiasco), which often produce white cloudy marks. However, it is also simpler to repair than other players (good news for the physios), as patch repairs to French polish may be easily blended into an existing team (excellent, a bit of magic spray and he’ll be good as new).

What’s that? That’s for french polish, not French Polish? Ah well, it’s still just as accurate and definitive as most of the other scouting reports you’ll read from people who’ve barely ever seen him play. And just be glad I didn’t base it on the other less polite meaning of french polish (look it up yourselves you pervs).

Anyway, as with any signing there’s all sorts of ways it could go wrong especially when all those ways are multiplied by a factor of TFC, but it seems like a good signing (if in a simplistic throw cash at the problem kind of way), in a part of the team where we really needed one, so I’ll give this a tentative thumbs up.