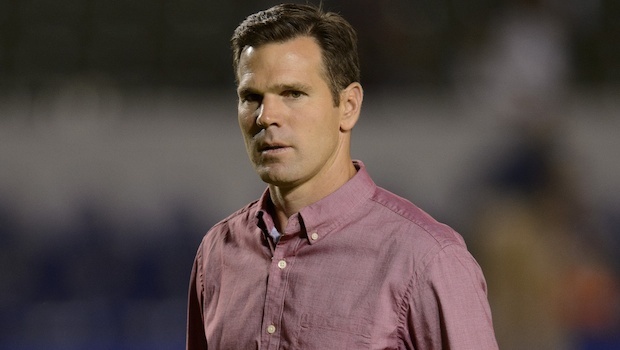 The Pink Torpedo, in all his scholarly glory.

When TFC’s lineup was announced last Saturday, and announced as a 3-5-2, there was a lot of consternation and snark from some people on twitter (hi!) with many predicting doom and some (hello!) questioning whether the change was forced on Greg Vanney due to the fact he only had one healthy and competent full back at his disposal so the 4-4-2 had to be abandoned. Surely this wouldn’t end well.  There was plenty of evidence, especially in the first half of it all going wrong, and you can certainly question that decision, I’ll get to all that later on so if you’re here for the Vanney bashing (and let’s face it, if you’ve made it to this site, you probably are) stick with this, but for now I come to praise Vanney, not to bury him. The 3-5-2, 5-3-2 whatever, was a good idea for a few reasons.

1) The diamond 4-4-2 had a good couple of months with a relatively close to full strength and mainly unchanging midfield and defence, and should definitely be used again, but in July, with Gold Cup and injury absences, things had been going wrong, with 4 goals conceded in back to back away games. Trying something new wasn’t a bad thing.

2) Ashtone Morgan was injured so the 4-4-2 would probably have required Justin Morrow on the left and another right back adventure for Warren Creavalle. Who’d have been excited about that? Crew fans aside, nobody, so yes, be pragmatic, find something that can fit the players you have. Also, before the Morgan injury, they lined up like this in the friendly against Sunderland, so it’s clearly something Vanney was at least thinking about anyway, not just a reaction to the injury.

3) That makes sense because one of the easiest scouting reports ever for someone who watches the games would be ‘Columbus love to attack down the wing’. That’s been a problem for TFC all season really, it certainly was the last time they visited Columbus. Having the extra man in defence enables them to have more players out wide to counter that Crew strength, while also allowing for there to be good defensive numbers in the middle when the cross comes in, or on the other side to avoid the opposing full back getting isolated if the Crew try to switch the play, ie what happened again and again to poor Warren Creavalle in that previous game in March.

4) With Cheyrou and Warner both playing deep lying midfielder roles, there should also be plenty of cover if a team were to go down the middle, through Federico Higuain for example. So there’s essentially 7 defensive players with this formation, it’s about shoring up the defence, never a bad idea.

5) But there’s also an attacking side to it as well, though it’s asking a lot of the full backs, it does also free them up to get forward and provide the width to the attack which has been a big part of the Reds’ game all season.

6) As long as it’s done well, it can help the team with the enthusiastic pressing that Vanney clearly likes. If done right, they can do that and still have players back in case the Crew escaped the pressing. Here’s an example of all this coming together perfectly, the goal that started the comeback. Yes Giovinco’s finish was a remarkable piece of skill, yes Warner’s ball to Giovinco was almost as good, dropping right on his foot, but go further back and how does it start? With Jackson halfway into the opponents half (and on the opposite side, that’s Lovitz just as far up) harassing the Crew player into a hasty and awkward pass. Is there a giant gap behind him? Nope, the wide defender, Zavaleta is right there with him, closing down the player the pass is going to (Also, note that scab Screw Cat working the stands in the bottom right corner.  #RIPCrewCat. #NeverForget)

Fast forward a few seconds, the ball’s been passed back to the original player, and Jackson’s all over him, with Warner and Altidore doing their bit to cut off potential passes.

Jackson forced the turnover, the ball went quickly from Altidore to Warner and then to Giovinco.  See the whole thing here. Giovinco’s obviously had a part in a looooot of TFC’s goals this year, and there are times when he’s been creating things pretty much by himself, carrying the team on his back. This isn’t one of those times, this is where the team, and yes, the formation they’ve been put in and the instructions they’ve been given, have done all the hard work to get the ball to Giovinco, the buildup had Vanney written all over it. Of course it still required a fabulous finish that probably anyone else on the team would have messed up, but then that’s why he’s paid the big bucks.

That’s what’s supposed to be happening, I imagine Vanney and co watching the tape and being pretty satisfied with that goal, the plan worked perfectly. During the game as a whole, it generally worked ok as well, TFC had 45% of the possession, a respectable amount against this Crew team, and were often carrying the game to Columbus, when it works like it’s supposed to, it’s not a bad plan at all.

Of course there were plenty of instances where this didn’t work at all, especially in the first half.  Columbus managed to get plenty of crosses in, the second goal saw Tony Tchani in oceans of space, Kei Kamara often found himself with the ball with no-one around him. As for TFC having decent possession and carrying the game to Columbus, the Crew seemed quite happy to let that happen, to draw TFC out and then go at an unorganised defence on the break.

In his interview at the start of the second half, Vanney blamed all that on the players not executing his plan right, choosing the wrong moments to press and not doing it properly as a team and all that, thus leaving a lot of room for the Crew. He’s not entirely wrong, the players did not make his plan look great, but much like in those first few chaotic games of the season, what was he expecting?  They’re MLS players, they’re going to make mistakes. The two players you’re asking most of, Lovitz and Jackson, are usually bench players and aren’t playing in their regular positions, they’re going to make mistakes. The team as a whole is playing an unfamiliar formation, they’re going to make mistakes.  It’s incredibly unfair of Vanney  to throw them under the bus for making those mistakes that he’s (perhaps without much choice and only as a necessary evil) set them up to make.

So a nice idea, but in the harsh light of real life, not a raging success, now the question is what to do for this Saturday’s game. We know Morgan will still be missing in defence, as will Bradley and Warner from the midfield, and perhaps Giovinco up front as well.  Much like Columbus, New England generally play with one striker (Charlie Davies, a different type of player to Kamara) and then have all sorts of dangerous options in the attacking midfield options. The likes of Juan Agudelo, Teal Bunbury or Diego Fagundez can burn any team out wide, Lee Nguyen and Kelyn Rowe can hurt you from the middle, they’ve struggled recently but are now unbeaten in two, if those attackers can get it together they can do a lot of damage. What’s a student of the game to do?

Without Morgan and without reinforcements for the out for the season Mark Bloom, TFC are still stuck with just one competent, confidence inspiring full back in Justin Morrow, so I think we’ll more than likely see the same 3 man defence rolled out there, though probably with Ahmed Kantari instead of Eriq Zavaleta. With limited options available, it’ll probably be Jackson and Lovitz in the full back spots again. Jonathan Osorio seems the obvious choice to replace Warner in midfield, though perhaps he’ll take the more attacking position and Marky Delgado drop back to the defensive position alongside Benoit Cheyrou.

Whoever slots in where, I’d hope for a little more caution when it comes to the balance of the team, if you have to err, err on the side of defence, after 11 goals conceded in the last 3 away games, a return to the attitude seen in Orlando and Philadelphia earlier in the season that ground out a couple of results would be welcome.  That, plus an extra week of familiarity with this system and the addition of Kantari might well be enough to keep the goals down. At the other end, well, let’s hope Giovinco’s heel issue is nothing more than all star related tomfoolery.