Don’t fuck with me.

It’s officially here – the new, less maple leaf strewn, still BMO sponsored Toronto FC kit is available for viewing (and of course purchasing).  As is usual with things like this in MLS and TFC, the official release of the Toronto’s 2015 kit was little surprise to most, thanks to previous leaks and teases in commercials.

The kit itself is – to my eyes anyway – a pretty solid one as far as kits in general and TFC kits specifically go. I like the simplicity; the stripes are subtle, I enjoy the departure from the usual white Adidas detailing and the removal of the maple leaf fiesta from the previous home kit.  I’m less crazy about the double MLS patch situation but that’s down to MLS itself and not a club choice so I’ll live with it some how.   But really – this is a kit that if it had no sponsor I’d snap up in a second.  Well, except for the outrageous price that MLSE/Real Sports are charging – $129.99?  Really?  I’m sure it was the same the last couple of years but as I’d no intention of buying one it would seem I’d glossed over the prices being charged.  But that’s not the kits fault so I won’t digress. 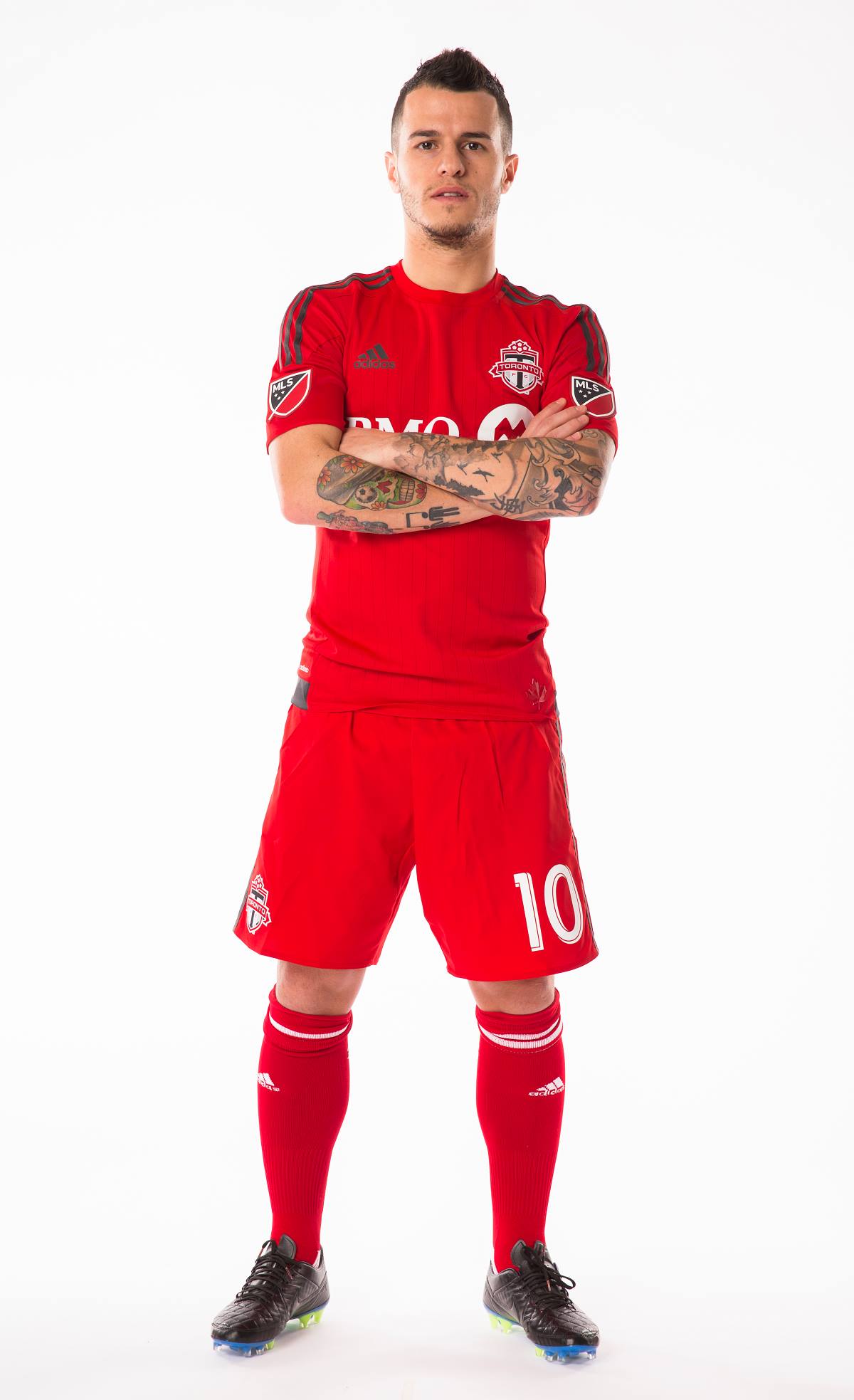 I make this look good.

Really the biggest takeaway from the new kit other than the simplicity of design (I really do like it) is the fact that BMO is indeed back as the sponsor for the 2015 season.   After the previous contract ended at the end of last season it seemed as though TFC were searching for a new sponsor to emblazon on the chests of our Reds.  Rumours swirled, fun was had in the imagining – I still think Mother’s Pizza was an excellent choice – but as speculation heated up, everyone was divided on whether the team would start with no sponsor or Pizza Pizza as the final choice.  In the end it is once again BMO – with a one year contract – that continues on as shirt sponsor.

Why don’t my socks match?

If you’re going to have a sponsor might as well stick with the devil you know; especially if other bigger and shinier prospects didn’t come calling as hoped.   Both sides cited lofty reasons for continuing the relationship – commitment to Canadian football, having a great relationship and trusting the brand – it’s about more than money is what they’re saying.  I’ll pause while you collapse into gales of laughter.   It is a logical continuation though – familiarity doesn’t always have to breed contempt and the two have worked together since TFC’s inception.  While it would have been nice to not have to see BMO on our and our competitor’s kits during matches, I can think of worse things.  Given that we have to have a sponsor that is – but that’s a battle that’s likely to never be won unfortunately.

So Vocal Minority readers and listeners what are your thoughts?  Where does this rank for you in TFC kits through the years?  Will you be purchasing one?  Let us know in the comments.