Sponsors and armbands and mascots? Yes, they matter. 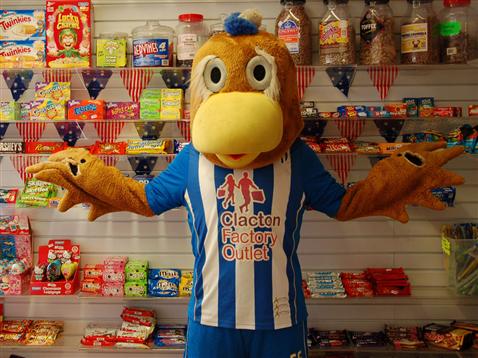 For those of you who enjoy (genuinely, ironically, snarkily, however you like) the more esoteric sideshow attraction aspects of football, the side dishes and condiments to the fat steak of the actual game itself, it’s been a fantastic week or so to follow TFC, practically headspinning as the hits have just kept on coming. Let’s re-cap. Deep breath, here we go.

New kit leak: It’s as simple as one could ever reasonably expect the leaf and slogan addled execs at MLSE to approve, I really like that, others apparently like bells and whistles and leafs and extra stuff, and think it looks like a training top. To each their own (though those other people are wrong, obviously).

The best thing about that shirt was its big blank non sponsoriness, but that’s obviously not going to last. Monday brought a rumour that Pizza Pizza was in the running to take over. As a fan of making fun of things, and as someone who hates sponsors and thus welcomes anything that makes people question the basic concept and where their limits are, I’m all for this. Others were appalled at the idea, the easy comparisons of embarrassing sponsors being Pizza Hut Park (RIP) or Philadelphia’s Bimbo. For them apparently sponsors are good, but only the right kind of sponsor. Others had no qualms about Pizza Pizza, any sponsor much the same as another to them.  To each their own (though those other people are wrong, obviously).  Sadly, that rumour has since been squashed and apparently the new favourite is BMO coming back, which is by far the most boring option out there, a terribly disappointing end if that is indeed what happens.

Then the team came back and the media got to talk to them, and the big thing was the captaincy being switched from Caldwell to Bradley. I wouldn’t really put that with these other peripheral things, in fact here’s there article I wrote about that, I don’t like it. Unnecessary, disrespectful and very sloppily handled. The team, at least publicly is talking of moving on, hopefully that’s what happens. Again, plenty of people see this as a good thing, that this is Bradley’s club so why not, or that who wears the armband isn’t all that big of a deal. To each their own (though those other people are wrong, obviously).

The hits kept on coming as a poll was sent out to the important supporters (not this one) on all sorts of things that TFC may or may not be thinking of doing. Including a question about a potential mascot. Now obviously, there’s an upside to mascots, but that’s when they’re other teams mascots that you’re making fun of and that you don’t have to deal with on a regular basis, but at your own club? For me and many others it’s an outright no to that one. It would be one more big step down the undiginified road that TFC have been steadily moving along for a few years now. Going away from the organic, supporter driven, ‘authentic football experience’ that was a big part of TFC’s early off pitch success. Now of course that culture has withered to a sorry shadow of its former self over the years, understandably so given how relentlessly tiring this whole thing has been, but that doesn’t mean it’s the wrong idea. Winning will do wonders to bring it back. Instead, the easy fix, cos hey it’s MLSE, that’s what they do, is to go down the Americanisation route, all the bells and whistles and distractions that are commonplace at the ACC and at most North American sports experiences.  Personally I think it’s a terrible idea, but again, plenty of people disagree, saying there’s no harm in mascots, kids like them and that’s a good thing, that plenty of proper big overseas clubs have them so what makes TFC so special, with many people wondering just why people would get so upset about it. To each their own (though those other people are wrong, obviously).

Those were the big things, there was also talk of a ‘players council’ to consult with and advise management, the TV schedule came out, people weren’t happy with a lot of 5 pm games and news of a new song that TFC have bought to use for this season. ‘Love me again‘ a plea to an abused and mistreated lover for one last chance (watch the video within the link, she gives him another chance, happy ever after, then they immediately get hit by a big truck. Fun.) Also, an update on the inevitable Argos move, saying a deal will have to be agreed within a month, and containing the totally preposterous line “MLSE CEO Tim Leiweke also declined to comment.”

So all in all a fun week on the second stage supplementing the main attraction, plenty to talk about, whatever side of the debates you might fall on.

Another theme of the week has been smug condescending tweets from those who consider themselves too good for this kind of thing, that all this stuff surrounding the actual game is insignificant and unworthy of everyone’s time. I’m fine with people having different opinions, I’m fine with people saying they don’t care about a certain issue, but it does annoy me when people go out of their way to sneer at those who do care one way or another about a certain issue. Let’s see some of those tweets shall we.

In my best Allen Iverson voice: “Not the game. Not the game. We’re talking about mascots, man.” https://t.co/ctfp9VGQJF

Today cause for #TFC distress is a potential mascot. As you were. — Rudi Schuller (@RudiSchuller) February 12, 2015

@cboehm I don’t think TFC is hyperventilating over the captaincy. Some fans/observers might be, though.

These are cherry picked examples, there were plenty of other people saying similar things, but I decided to stick with those who are one way or another, more or less making their living off of football (and I’m sure I’ve missed some within this category). Because you know what, if people didn’t care about all this sort of thing, you’d need to be looking for another job, so can the self righteousness.

These people have got it the wrong way round. Let’s face it, in the grand scheme of things, everything about football is insignificant and pointless. EVERYTHING. No lives are being saved, beyond the basic recreational health or character building aspects of it, there’s no contribution to society that football, or any sport, is making. Allan Iverson, or anyone using that quote for other purposes, would prefer to talk about ‘the game’? The game is the most insignificant part of it all.  The actual game, the tactics, the results, all of that doesn’t matter (especially in a North American franchise system with no real consequences to success of failure). Players and coaches come and go (especially at TFC), matches are won and lost, seasons are enjoyed or not, and next season everyone just lines up and does it all again.

Where football and football clubs do matter is in their identity, their place in a community, what they stand for, and the symbols they use to project that image, for example the jersey or that big name on the front of the jersey.  Does it have respect for it’s supporters or merely see them as a replaceable wallet, a commodity to be packaged up and sold to sponsors, their own concerns and wants ignored. How does it treat its players (and TFC has a looooong history that suggest not too well), take that further and how does it treat its employees, when kitman Malcolm Phillips was let go that was another example of what we’ve seen this week, some people were upset, others didn’t care and suggested that a mere kitman was in no way worth talking about. There are of course extraneous things that have positive effects, a club’s work in the community or with charities for example,  you certainly can’t fault TFC there.   All these things add up to something that is worth identifying with, worth supporting, they give meaning to the pointlessness of 22 guys or girls chasing a ball around. Barcelona like to proclaim they are ‘mes que un club’ (this obviously meant more back in the days before Qatar airways and transfer dealings that were too sordid even for FIFA, and their zealous commercial exploitation of that very phrase but stick with me), that’s not because of what the players did or didn’t do over they years, it’s about what the club means to the city and the region, and it’s in the same to lesser or greater extents for any club.

For better or worse, people’s sporting affiliations have become a big part of their identity, if you’re reading this there’s a good chance you have ‘TFC supporter’ in your twitter profile for example, or you often wear a jersey or other merchandise that signifies that to other people. Football clubs are all brands now, and brands can be a big part of the image people choose to project to the world. That image might be ‘I like big powerful things that win’, or ‘I’m original and different than everyone else, being cool is more important to me than being successful’ it might be ‘this is where I’m from and I’m proud of that’ or many other things. Obviously different people want, like, accept or even just tolerate different things, no club is going to please everyone all the time, but image matters. What a club stands for matters. And that’s wrapped up in all the kind of superfluous stuff being talked about this week more so than what happens on the pitch, than your match reports or tactical breakdowns. If you can’t respect your club, how can you respect the part of you that identifies as a supporter of that club? So for all those telling anyone this stuff isn’t worth talking about, I smugly and dismissively SMH right back at you.

To (horribly) paraphrase Pete Postlethwaite’s character in the move Brassed off: – ‘Truth is, I thought it mattered! I thought football mattered! But does it bollocks! Not compared to how mascots matter!’