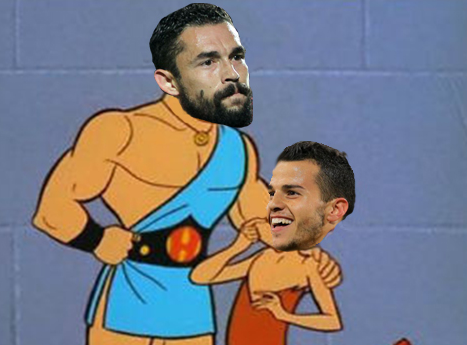 Have you been looking on with envy at all the other MLS clubs recently as they’ve added exciting new players? Been trying to make yourself feel better by forcing yourself to think ‘we did our big business at the start of the season, we’ve had an entire half season of our guys already! and hey we got Kantari already, that counts right?’? Still feeling a bit of withdrawal though, craving that hit of getting involved with the craziness and thinking ‘woah, we did what?’ Well good news TFC fans, today will keep you going for a short while. Time to put your business socks on, it’s Bezness, it’s Bezness ti-iiiime.

The day started with a minor deal, as comedy’s gift to right backs Warren Creavalle was shuffled off to Philadelphia for a 2016 2nd round draft pick. The chances of that pick coming to anything are of course slim (though increased by the existence of Wunderland AFC up there in Vaughan), this was all about dumping salary and opening up a roster spot.

Some fans were happy in an ‘addition by subtraction’ kind of way, happy to never see Creavalle at right back in red again, but that seems tremendously harsh. I have no ill will at all to Creavalle, he’s a decent MLS depth level player, useful to have on the bench and can fill in adequately in midfield, and maybe at a pinch, if you’re a bit desperate, at right back.

Of course, that’s not how Greg Vanney and co wanted to use him. With Mark Bloom injured (and maybe even if Bloom was fit), they seemed to see him as the starting right back. And TFC have asked a lot of their full backs all season, they might be the most important positions on the team with how Vanney wants to play.  The midfield has always been narrow, so where’s the attacking width coming from? The full backs. The team is supposed to press high to try force turnovers, so who has to push up to fill gaps so there’s no easy outlet pass for the opposition to escape the pressure? The full backs.  If the full backs are pushing forward or pressing, who’s going to cover for them so there’s no gaping holes for the likes of Kekuta Manneh or Fabian Castillo to run into? Not the midfielders on a reliable basis, and the central defenders don’t seem much better, so I guess that’s once again the full backs.  Probably the hardest part of all this is not actually doing it, but making the decisions of when they should be getting forward to complement the attack or the high press, and when they should be hanging back to keep the defence solid.

It’s a big ask for any full back, never mind an MLS full back, never mind an MLS midfielder.  Was Creavalle good enough to pull it off?  No, not often enough he wasn’t, he did look alright going forward, but he was often caught out on defence. Would he have got better if given a lot of time?  Yes, but TFC didn’t have that time, and so instead other solutions were sought, Justin Morrow being the most successful plug in to the right back spot. Coach tries player in a difficult spot, it doesn’t work out, coach tries different player. That’s an old and always ongoing story in football, there’s no shame on either side in how it worked out, though the way Greg Vanney repeatedly blames individual mistakes from players he’s putting into hard situations that they probably shouldn’t be put in is certainly grating.

Anyway, I wish Creavalle nothing but the best and hope he manages to get his career back on track. Philadelphia doesn’t seem the best place for that, they’re as weird and wacky as TFC, just without the big money signings, how Creavalle must yearn for the days of Houston under Dominic Kinnear. Let’s hope they at least decide to use him as a midfielder. Give the man a sporting chance.

So, a useful player out with more or less nothing in return, surely there’s got to be something else to this, a player coming in to fill that empty roster spot, and yes, yes there is. Some allocation money was sent to the Sporks (even though it’s been 6 years since he played there!  MLS!) for the rights to Herculez Gomez

Herculez Gomez!  Whaaaaaaattt? That guy who was with the US national team, who was really good for Santos Laguna a few years back, who’s been playing in Mexico for a while? That guy? Holy shit, he’s really good! How are we affording this? Our attack’s going to be insane! Who needs defence, we’ll win 5-4! Whoooo!

That was the reaction of many, including myself if I’m being honest. A little bit of research does put a bit of a dampener on it really, time apparently catches up with everyone. a) He’s 33. b) He hasn’t really played much in the last 3 years with Tijuana, Tigres and Puebla in Mexico, mainly coming off the bench, and getting more starts in cup games. c) He hasn’t scored much either, 2 league goals in the last 2 seasons, though his cup record is again better, 7 goals in the Copa MX this season and 3 goals in 4 sub appearances, 58 minutes total for Tigres in the CCL 2013/14 edition. d) Look back at his career and he was never really all that prolific of a goalscorer really, even in MLS, he’s very comparable with another fading former US international, Mr Robbie Findley, and how do you feel about him these days? exactly. So, yeah, if you had visions of him banging in all sorts of goals alongside Giovinco and Altidore, probably best to dial that down a bit. I can’t see this signing changing the formation into a 3 pronged attack.

Having said all that, I can see him being a very good option off the bench, and a reasonable backup to Altidore should injuries, suspensions, poor form or general funk continue to dog him. He’ll be an improvement over Robbie Findley and Luke Moore in that position, and I think could also be a very valuable experienced player to have around. He’s won things, he’s played and done well in big games, it wouldn’t surprise me at all to see him pop up with an important goal or two in the playoffs or in games with playoff qualifying implications, and that would make it worth it right there.

Do TFC need more help in defence than attack? Sure, but we don’t know what deals were available, what players were being offered and how much was being asked. Or what deals might still come along. But was this unnecessary and wasteful? Without knowing the salary details involved (Is this using up all our cap space, or is there still room for further additions? It’s MLS, we’ll never know! Hooray!)  I’ll go with no it wasn’t. Have you thought to yourself, ‘we need more options up front so we’re not quite so Seba-centric’? Have you gone down that dark path of wondering what might happen should Giovinco pick up an injury? This will help address both of those questions.  It’s not a game changer by any means, there are plenty of better players that have come into MLS recently, but it will definitely help strengthen the squad. And wasn’t that few minutes of ‘holy shit we’ve done something crazy again! wheeeee!’ a fun little ride?