Home » Analysis & Opinion » Toronto FC SSH Ticket Delivery Day – Or What Have The Marketing Folk Come Up With This Year?

Toronto FC SSH Ticket Delivery Day – Or What Have The Marketing Folk Come Up With This Year?

Early yesterday morning the word went out on Twitter that this year’s SSH tickets were being delivered – which for me means the season has actually begun.  I know, I know, they’ve played four games; but if you haven’t seen your team live for months and don’t have tickets in front of you, then it still feels a little less real.  There is something exciting about receiving the tickets every year, and breaking open the box or cannister or whatever they’ve packaged them in, to see what this year’s scarf looks like and what the tickets look like and so forth.   I was one of the lucky ones that was on yesterday’s list of SSH deliveries and well, the package is an interesting one this year.  As you can see in the first picture they’re really hanging their hat on the ‘Come On You Reds’ and the red thread concepts aren’t they?  Now the scarf itself has a bit of a split personality:

As you can see the flip side is a half scarf of red and onyx.  On the onyx (I’m just going to call it the grey, OK?), on the grey side there are nine little maple leafs – get it, nine for nine seasons – clever.  And then on the red side – where you’d expect the club badge to be – is simply a stylized ‘T’.  Out of everything else that I may find off about the scarf, this actually bothers me a fair bit.  What’s a football scarf for your club without the badge?  This is the first scarf to not have the badge on it at all – even the all red and white badge from a few years back was superior to this.  Nowhere on this scarf does it say Toronto FC or even just TFC; nowhere.   This club’s identity isn’t so easily recognized that leaving the badge or the club name off of it is in any way a good idea.  Especially if left off in favour of a stadium chant that is more famously associated with a club across the pond.

In fact I consider this to be a serious misstep – for a club that is striving to regain fan confidence and is spending a ton of time and energy in promoting the supporter culture, to leave both the club name and badge off of the one thing you want your fans to wear each week.  It’s an odd hiding of, or even ignoring the club identity.   Is there a rebrand in the works, did they think it wasn’t cool to have any actual identifiers?  I don’t get it.   In my modest collection of football scarves (club, country and other) there is not a single scarf – regardless of where in the world or what league the scarf is from – that doesn’t at least have the club badge on it.  Not one.  So this above all is my concern with the scarf and it’s highly doubtful that I will wear it; to games or otherwise. 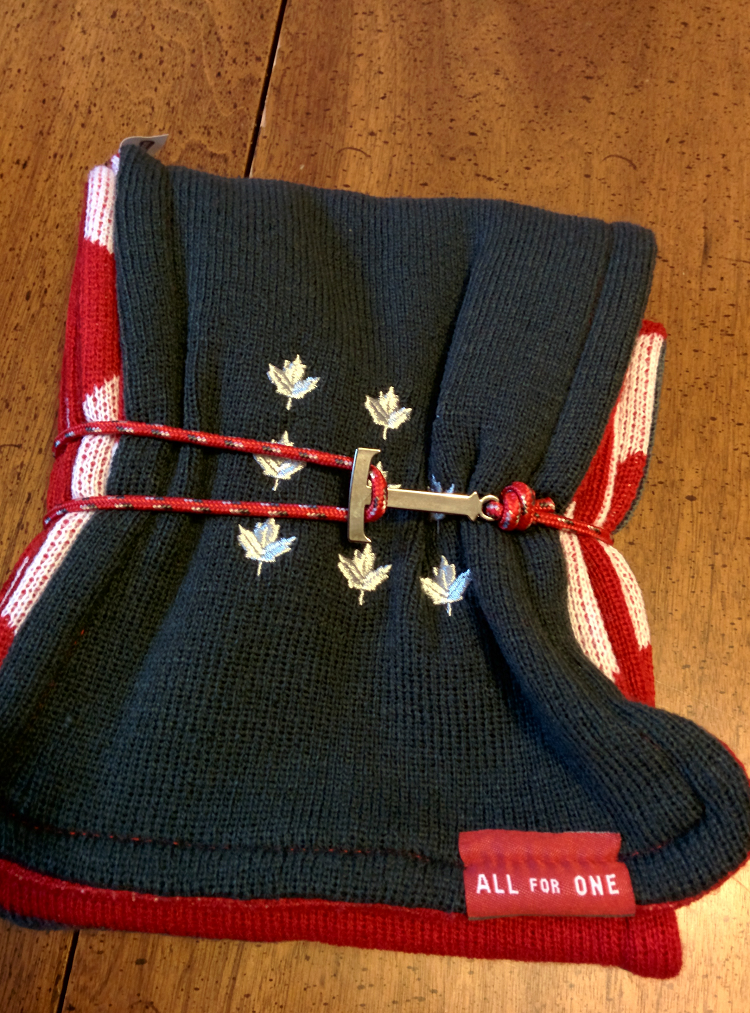 Can’t forget the All For One

On to the next part of the package.  What at first I thought was a braided red thread with the same stylized ‘T’ that has taken the place of the badge hanging from it, in fact turned out to be something more like a bungee cord as you can see above and below: 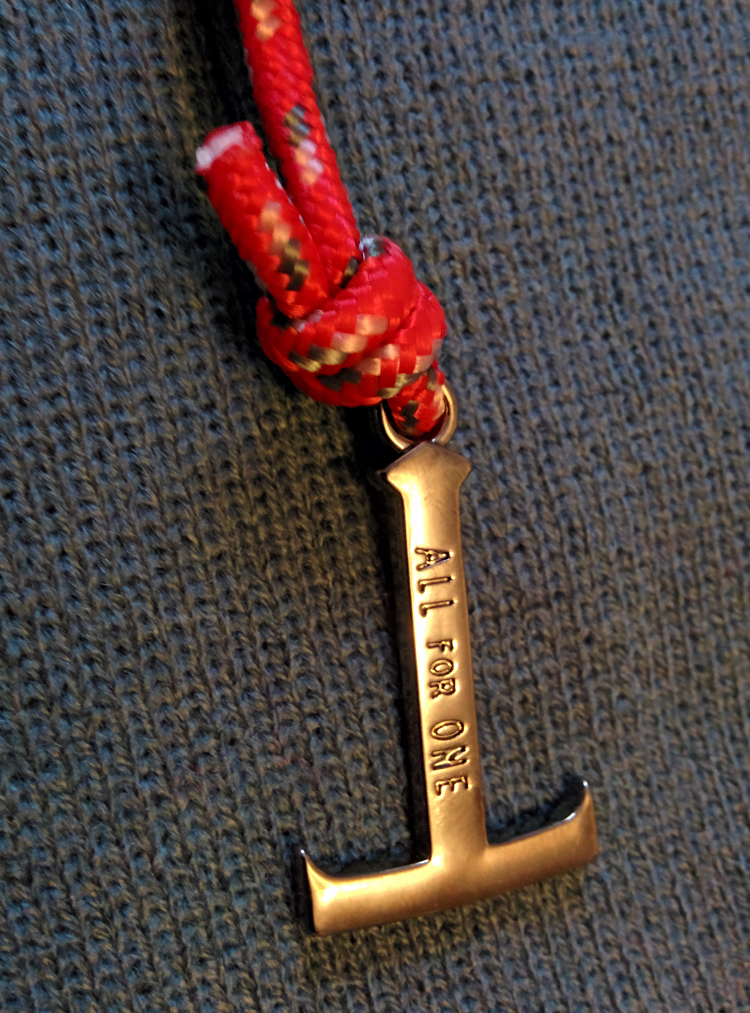 But wait, there’s more!  This bungee with the fancy T is something else all together.  In fact it’s something you’re supposed to wear.  How you ask?  The answer is in the next picture: 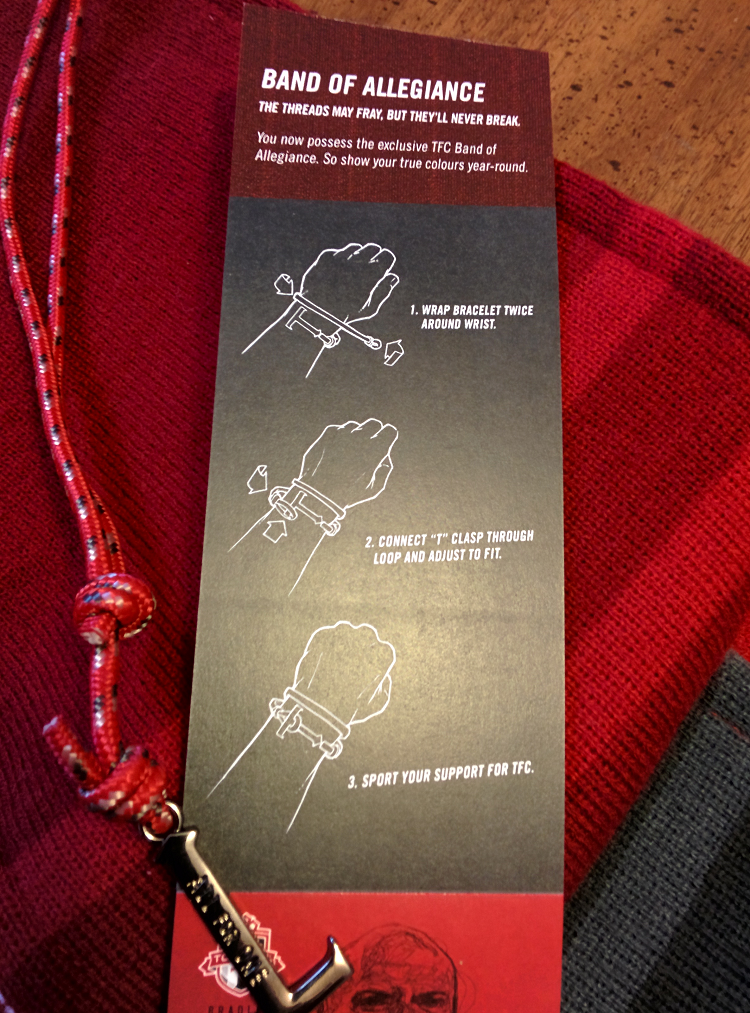 Band of Allegiance; excuse me, the exclusive TFC Band of Allegiance.  It’s actually called that.  On purpose.  Apparently intended for adults to wear and everything. The mind boggles as to where this came from.  Why not just include TFC friendship bracelets?  And I’m half serious when I say that – actual thread would be involved as opposed to something I’m more inclined to use to keep a cupboard closed.   I spend a lot of time railing against the constant focus on marketing and razzle-dazzle from our club but I have to question who’s coming up with some of these ideas.  The tickets themselves are a little more subdued  – you can see the top of one in the above picture – and have sketches of the players instead of photos or odd groupings of local fans on each ticket.  But my favourite is a slightly deranged looking Bitchy the Hawk on the ticket for the Voyageurs Cup match: 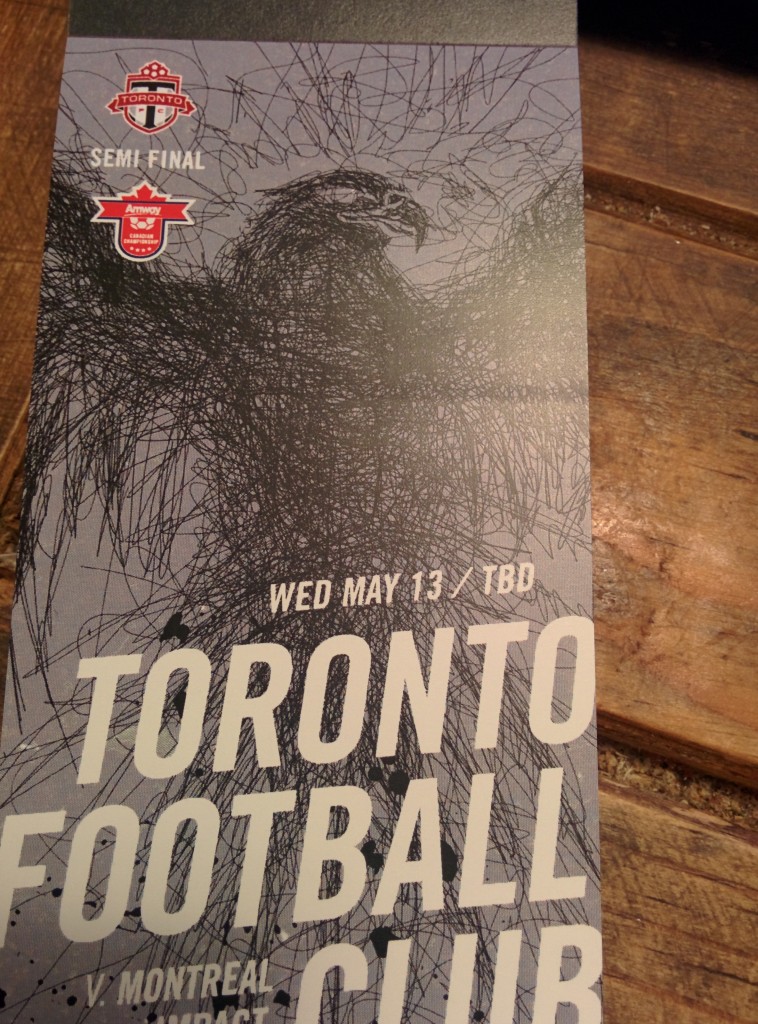 So there you have it folks, this year’s Season Seat Holder package.  I’m happy to have my tickets but to me this is not their finest hour.  Maybe try some crowd-sourcing next year guys; talk to those supporters and fans you’re so busy appreciating this month and seriously, don’t leave the badge off the scarf again OK?  Seriously, not cool.