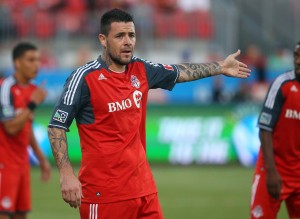 Why do you keep sending us to Frisco? Why?

After weeks – well, two weeks – of waiting, Toronto FC are finally back in action this weekend.   Can I say again how much bye weeks are the devil?  Even though they mean less games that TFC  have to play on the road to start this season, but this stop and start nonsense is difficult.  However the team is about to start a solid run of games that will perhaps allow them to build chemistry and you know, learn to play as a team.  And what better way to start this nice run of games then to head off to visit Mark Hinkley’s FC Dallas in frisky Frisco.

While this season hasn’t been a full on nightmare for TFC, it certainly hasn’t been anyone’s idea of a dream.  We always knew that the long road trip to start the season was going to cause some issues and likely bring some nervous moments.  What we apparently didn’t know – well, some of us had a pretty good idea – was the problems that the backline would face; both from injury and talent level.   Our friends over at Black and Red United put together this rather illuminating stats piece that highlights (to a scary degree) the defensive issues Toronto has thus far this season.   Yes, it’s a small sample size, but it makes you cringe just a little doesn’t it.

So now aren’t you excited to see whatever back four they cobble together for this weekend’s game?  Once again Steven Caldwell will be out, Clement Simonin has developed an issue with his knee, Warren Creavalle is suspended (I know you’re all sad about that) and well, that’s enough right?  But wait, there’s more!  Mark Bloom is available, well sort of – he’s still coming back from injury and who knows what his fitness level is like.  Similarly so is Marky Delgado – so that back four is once again looking mighty thin.

When asked about who might play at the back Greg Vanney mentioned Bloom and Delgado (although much hedging around Bloom), instead throwing out names like Jackson and Nick Hagglund…Justin Morrow mentioned that he’d be fine with playing CB again….this defensive unit couldn’t be more solid!  So what we’re potentially looking at as a best case scenario not having the preferred pieces in place is this: Jackson, Damien Perquis, Justin Morrow and Ashtone Morgan – or at least that’s how I see it.  It’s the least cringe-worthy thing I can come up with if Hagglund isn’t playing.  And it could work; it would allow Jackson and Morgan to be part of the attack and keep two very strong defenders at home when they go forward.  My only concern would be defending set pieces; which of course is always a concern for TFC but this is an area in which FCD excel.  How many times have we seen Michel whip in a perfect free kick for a goal? Or Matt Hedges in the mix on set pieces or Blas Perez? This is going to be terrifying, isn’t it?

I’ve not even mentioned Fabian Castillo, Tesho Akindele or (the eventual scorer of the winning goal), Kyle Bekker.  What about Mauro Diaz?  Well, he’s been injured and hasn’t played for a few games – which means of course he’ll start and run the midfield in circles around TFC.  Dallas possess a lot of talent and a lot of weapons – they’re mostly the same team they were last year so have lots of familiarity and chemistry (I wonder what that’s like) with one another.  They’re also on a losing streak. And not just any losing streak; no they’ve been spanked their last two games by a total of 7 goals to 1 – the last being a 4-0 drubbing by the sad sack Colorado Rapids last weekend.   Isn’t that great? A team that has faltered hard the last couple games after ruling the league to start and TFC are coming to town?  The team that has never won in Frisco?  That has a potentially porous defense with trouble defending set pieces?  Dear gods – can we concede defeat before a game starts?

Stop being so doom and gloom you say?  OK I’ll try.  Umm, Giovinco’s been looking very good and depending on Hedges (and whether Diaz plays), he could have some fun making them chase him.  He really has been fun to watch and if this team can gel then he’s going to make opposing teams suffer.  I would love to see Bright Dike out there instead of Luke Moore to cause some problems/distractions that would allow both Seba and Jozy Altidore to get into better scoring positions.  Benoit Cheyrou is settling in nicely and if he and Michael Bradley are on the same page then the attack should be able to flow through the middle without having to worry as much about the wide players.  My concern is that this is a team that went into Chicago against a faltering Fire team and fell to pieces defensively – no amount of attack is balancing out mistakes on the defensive side – both as a team (and system) and individually.

At best I’m hoping for a solid draw – I can’t even hope for a win right now.  There is opportunity for this team to find it’s feet – if they can put together anything resembling a complete game performance like they’ve managed for 30 or so minutes here and there, then good things can and will happen.  But this team isn’t consistent right now; both in lineup and play on the pitch.  Hopefully a more cautious approach is taken and Toronto can be proactive instead of reactive through much of the game; because when focused they’ve put together some very nice things.  Anything can happen but I’ll stay cautiously cynical for at least one more game.